#2 Minnesota Rolls Through Maryland In Three 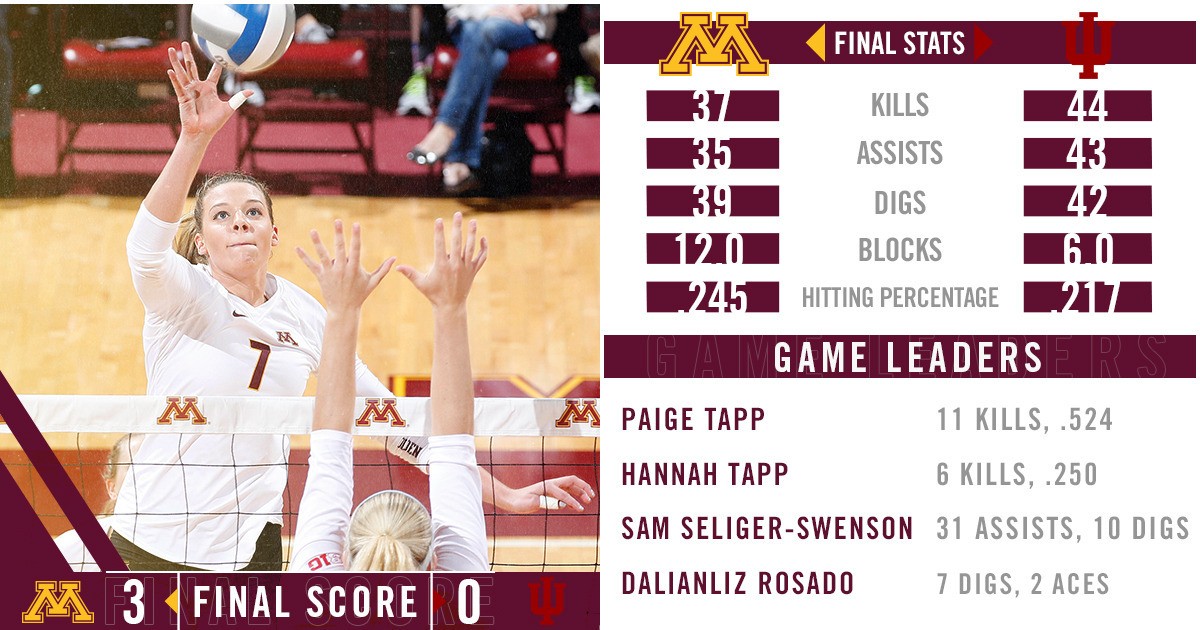 As a team, Minnesota had 12 blocks to Indiana’s six, and hit .245 to the Hoosiers’ .217. Paige Tapp led the team with 11 kills and didn’t commit an error, hitting a team-best .524, adding five blocks. Sarah Wilhite followed with nine kills and five digs. Hannah Tapp and Molly Lohman each had six kills, with H Tapp adding six blocks and Lohman putting up five. Dalianliz Rosado had seven digs with two service aces, while Katie Schau had five digs and Alyssa Goehner had four. Samantha Seliger-Swenson led the team with 10 digs, and added 31 assists.

The Gophers will be on the road for the next three matches, facing Maryland on Sunday at 3 p.m. CT, and traveling to Illinois and Northwestern the following weekend.

Set 1: Minnesota hit .281 to the Hoosiers’ .143 to win the first set, 25-21. The set started out evenly matched, with six tied scores. A Rosado ace at 8-7 gave the Gophers momentum with a 4-1 run, forcing an Indiana timeout at 12-8. Still on Seliger-Swenson’s service rotation, Minnesota would continue its run going 5-1 to force a second Hoosier timeout at 18-9. Indiana would fight to decrease the lead, making its way within three points of the Gophers at 24-21. But two kills from P Tapp ended the set.

Set 2: The Hoosiers outhit Minnesota .278 to .212, but the Gophers came from behind to take the set, 26-24, and go up 2-0 on the match. Indiana took an early lead, with Minnesota calling a timeout at 7-3. Rallies would go back and forth, until the Gophers took a 3-0 run forcing an Indiana timeout at 12-10, with the Hoosiers still leading. Following the timeout, Indiana went on a 7-3 run to force a second Minnesota timeout at 18-13. The Gophers would shrink the Indiana lead to one at 23-22, forcing the first Hoosier timeout. The set was tied up at 23 and 24, with a Wilhite/H Tapp block putting the Gophers at set point, and a kill from P Tapp ending the set.

Set 3: Indiana went on another early lead going up 6-2, until Minnesota tied up the set at 7-7. The Hoosiers took over the lead at 10-9, with the set staying close and back-and-forth until the Gophers tied up the set at 18, forcing Indiana to take its first timeout. Minnesota took over the lead, causing a second Hoosier timeout at 21-19. The Gophers would extend the run to 4-0 on Seliger-Swenson’s service rotation, with an Indiana error putting Minnesota at match point, and a Lohman kill ending the match.

“I think Minnesota played well today and showed they’re an elite team,” head coach Steve Aird said. “We didn’t come out ready to play in the first and second sets, but the team played a lot tougher and fought in the third. This is an unforgiving conference, and we have a young team, so we’re learning how to compete at this level.”

All but three of Maryland’s Big Ten matches this season have been against opponents ranked or receiving votes in the AVCA Coaches Poll. Sunday’s match was the Terps’ fourth straight against a ranked foe.

MacGregor posted a solo block early in set one before the Gophers pushed ahead to a 9-4 lead. Milana served an ace and a block from Liz Twilley and MacGregor pulled within three, 13-10. Minnesota used a 5-1 run to take a 19-12 lead. Nell Drummey tallied a service ace and Milana and Twilley notched late kills before Minnesota finished the set, 25-16.

MacGregor and Milana knocked down kills but Minnesota worked ahead to an 11-5 advantage in the second set. Angel Gaskin posted a pair of kills, but two straight Gopher blocks gave the visitors a 16-8 lead. The Terps rattled off three straight kills to force a Minnesota timeout at 17-12. Hailey Murray tallied two kills late in the set, but the Gophers were able to take a 2-0 match lead with a 25-19 game win.

Milana posted nine kills in the third set as the Terps looked to extend the match. A MacGregor service ace and a Milana solo block helped Maryland take a 6-4 lead, and the Gophers called timeout with the Terps ahead 9-6. Minnesota used a 6-0 run to take a 14-11 lead before working out to a 19-14 advantage. Twilley and Milana notched kills, and a Smith service ace put Maryland within three, 21-18, and forced a Minnesota timeout. A Gaskin-MacGregor block and a Milana kill put the Terps within one, 21-20. Milana tallied two kills in the end of the set, but the Gophers took the game, 25-22.

The Terps are back home in the Pavilion on Friday to host No. 11 Penn State at 8 p.m. A limited number of tickets are still available for the match, and fans are encouraged to purchase tickets ahead of time. Men’s basketball hosts their season opener the same night and all parking lots surrounding XFINITY will require basketball permits. For more on match info, click here.