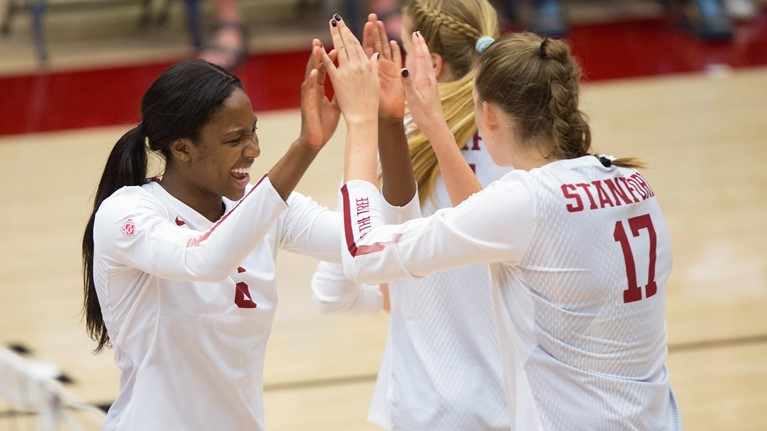 #2 Stanford remains unbeaten in Pac-12 play with a sweep over Washington State. This is the first match of the season that the Cougars have been swept while Stanford has swept 13 opponents this season.

The start of the first set was a back and forth battle between the two squads with the Cougars picking up a 17-13 lead over the Cardinals. The lead did not last long as Stanford fought their way back, tying things at 22 all. Three straight Stanford points on a block from Audriana Fitzmorris/Merete Lutz, a Morgan Hentz ace and Meghan McClure kill finished the set 25-22.

Stanford took a small two-point lead over the Cougars for most of the beginning parts of the second set until they pulled away with a 19-13 lead. The Cardinals continued to push through the second set but McClure ended things once again for Stanford with a kill at 25-18 to go up 2-0 in the match.

The final set was a blow out for the Cardinals as they jumped out to a 10-3 lead early. This lead only continued to grow to 23-13 until a Tami Alade and Lutz kill concluded the match 25-14.

Kathryn Plummer posted 10 kills in the win along with five digs and two blocks while Lutz recorded nine kills. Hentz picked up a match-best 17 digs.

For Washington State, Taylor Mims put down a match-best 18 kills while setter Penny Tusa nearly recorded a double-double with 13 assists and nine digs.

Stanford was well-balanced offensively all night, hitting .299 as a team. Washington State was limited to a .137 attack percentage, committing 20 hitting errors.

Washington State hung with the Cardinal in the first set, leading 20-18 down the stretch. Stanford went on a 7-2 run, including a kill and a block by Lutz, to complete the come-from-behind win in the set.

Stanford turned up the defense in the second and third sets, holding Washington State to .200 and -.054 attack percentages, respectively. The Cardinal is now 59-4 all-time against the Cougars.

Stanford hits the road next week to begin the second half of conference play at Arizona State on Friday and Arizona on Sunday. Both matches will be televised on Pac-12 Network.

Taylor Mims led the Cougars with 18 kills (.286) and had five digs, one block and WSU’s lone ace. Casey Schoenlein added eight kills and one block. Penny Tusa had 13 assists and led the Cougars with nine digs. Ashley Brown had 12 assists. Claire Martin and Ella Lajos were two of three players with four blocks in the match. Martin’s blocks moves her into sixth place on the WSU all-time career block assists list with 339.

The Cougars came out ready to play and battled the Cardinal to 13 tie scores and six lead changes in the opening set.

Stanford had 42 kills on the night and hit .299 while WSU had 33 kills and were held to a .137 team hitting percentage. Stanford served six aces to WSU’s one but both squads committed six service errors. The Cardinal barely edged the Cougs in digs, 38-37, and is only the second team this season to out-block WSU, 8.0 to 6.5.

WHY & HOW…
WSU Head Coach Jen Greeny said, “I think we served pretty tough that first set, we blocked okay, our defense was good but Taylor Mims was really good in that first set. I thought we were doing a good job and then they picked up their serving and our passing fell off the table. It’s hard to run much of an offense with the passing numbers that we had tonight bur Stanford is an unbelievable team; they have a lot of skills so credit to them but we have to be able to do more with those not great passes.”

On what Coach Greeny takes away from the first half of the Pac-12 season she said, “We have played everybody but Arizona State and I think this team is learning we have to be more consistent and not let those silly errors and silly mistakes affect us. We can be right there with all of these teams if we clean up those things. It is hard when you have injuries and people are playing different positions but that’s what you have to do; you have to step up and find a good combination that works. Maybe it’s back to the drawing board a bit and putting some other people in different positions so we’ll see what happens in the second half of the Pac-12 season.”