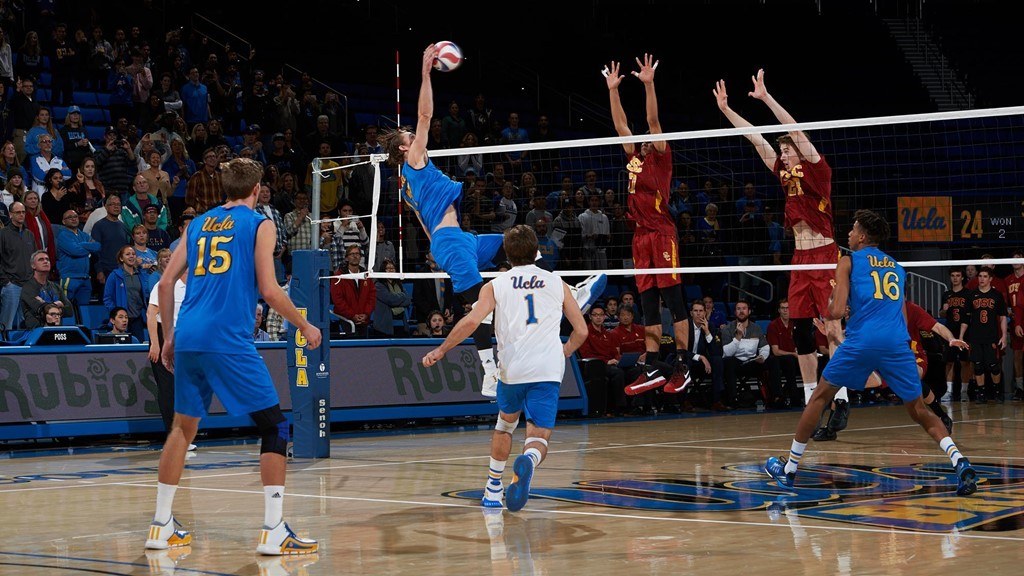 Christian Hessenauer played just 1 set for UCLA and recorded only 1 kill, on a broken play, but that 1 kill was the crucial final point of the team's 3-1 win over USC. Archive Photo via UCLA Athletics

The #2-ranked UCLA Bruins won their 4th-straight game to open MPSF conference play on Friday night, beating unranked USC, their cross-town rivals, 4-1 in front of a crowd of over 2,000 fans.

UCLA out-hit USC by a .309-.208 percentage margin, and out-blocked their foes 13-7. Offensively, the Bruins were led by Jake Arnitz, who had 20 kills (2e, 40 attacks, .450 percentage) to become the first UCLA player with 20 kills this season, and just the 10th nationally to do so in a 4-set game. Arnitz also chipped in 6 digs and 4 blocks for the home team to post 22 total points on the night.

UCLA’s libero, Jackson Bantle, also had a season-high in digs with 14.

USC sophomore Aaron Strange had 17 digs for USC on top of 11 kills for the first double-double of his career.

UCLA puts their perfect conference record on the line next week with back-to-back, home-and-home games against #12 UC Santa Barbara on Wednesday and Friday.

No. 2-ranked UCLA won its fourth straight match to open Mountain Pacific Sports Federation (MPSF) play on Friday night, handing crosstown rival USC a 3-1 setback in Pauley Pavilion before a crowd of over 2,000. Scores of the match were 25-20, 23-25, 25-20, 25-22. Junior Jake Arnitz became the first Bruin of the season to crack the 20-kill mark and led the Bruin attack with 20 kills and a .450 hitting percentage. UCLA, now 6-1 overall and 4-0 in MPSF action, will play next on Wednesday night at home in Pauley Pavilion against No. 12 UC Santa Barbara at 7:30 p.m.

Three kills from Arnitz helped break open set one after the score was tied at 9-all. His fourth kill of the set lifted the Bruins into a 14-11 advantage. USC cut the gap to two on several occasions down the stretch before a kill and a block by Mitch Stahl took the Bruins to set point. A Trojan error resulted in a 25-20 win. UCLA hit .524 for the set.

The Trojans broke a 5-all tie in set two with a scoring run to take a 6-11 edge. UCLA cut the deficit to 10-11 after an Arnitz kill and then evened the score at 18s on a JT Hatch kill. Kills by Arnitz tied the score again at 19 and 23 before USC tallied the final two points for a 23-25 decision.

UCLA stormed out to a 6-0 lead in set three behind the strong serve of Stahl who registered a couple of aces. After the Trojans sliced into the margin at 10-7, Stahl put down a couple of kills to restore order. UCLA led 14-8 after a Hatch kill and went on to post a 25-20 win.

In set four, the teams battled back-and-forth to a tie score at 15-all. Stahl then teamed up with Arnitz on a block for a 16-15 lead. UCLA led 18-15 after kill number 19 from Arnitz. USC closed to two twice down the stretch before Christian Hessenauer delivered match point with an off-balance kill for a 25-22 win.

Arnitz’ 20 kills was one shy of his career high, set in a match last season against CSUN. He added five blocks and six digs. Daenan Gyiman had 10 kills (.444) and three blocks. Stahl, who had three aces, registered eight block assists and moved past Nick Vogel into sole possession of fourth place on the all-time UCLA block assist list (rally scoring era 2001-present) during the contest. He also moved past Jamie Difenbach into seventh place on the all-time school list for total blocks (now with 290). Jackson Bantle totaled 14 digs. Hagen Smith had 24 set assists and seven digs. UCLA hit .309 for the match to .208 for the Trojans. UCLA outblocked USC 13.0 to 7.0.

Lucas Yoder had 15 kills for USC, while Woody Cook added 13 kills and 7 digs and Aaron Strange had 11 kills, 4 blocks and a match-leading 17 digs.

In the first set, UCLA scored back-to-back points move out to an 11-9 lead and the Bruins steadily pulled away while hitting .524. USC built an 11-6 lead in the second set but UCLA caught up at 18-18 and went up 21-19 before the Trojans regained the momentum with a 3-point run to go up 23-22 before a Yoder kill and a Bruin hitting error finished out the set despite the Bruins’ 4.5 blocks and 15 digs. UCLA scored the third set’s first 6 points and USC couldn’t catch up. The Bruins used a 4-0 run to go up 18-15 in the final set, a margin USC was unable to overcome.