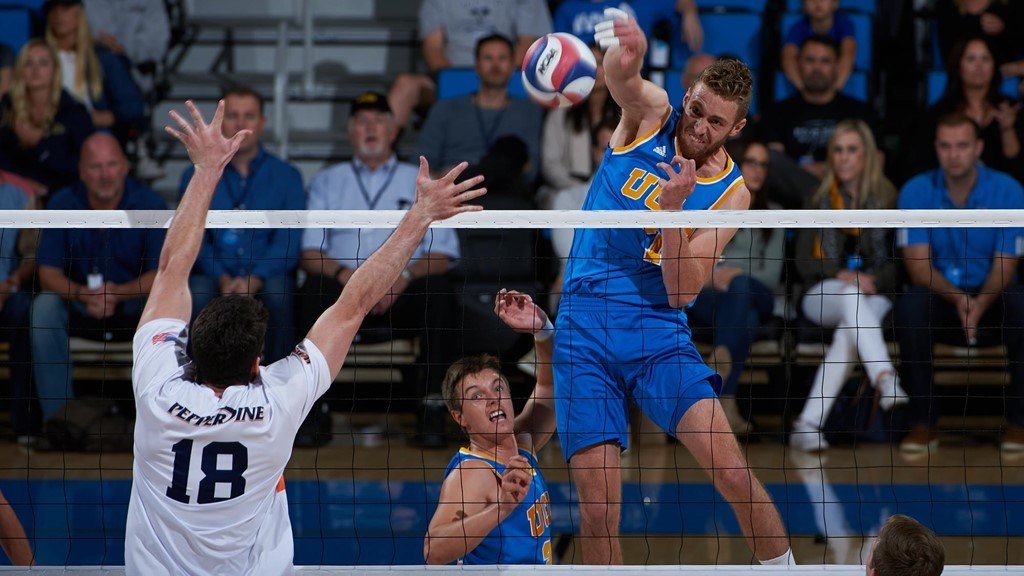 #2 UCLA was a dominate force to be reckoned with against #13 Penn State, taking them down in a three set sweep. Current Photo via UCLA Athletics

#2 UCLA was a dominate force to be reckoned with against #13 Penn State, taking them down in a three set sweep.

UCLA men’s volleyball improved its record to 2-0 on the young season after dealing No. 13 Penn State a 3-0 setbackon Friday afternoon in the first round of the AVCA Showcase – Big Ten/Pac-12 Challenge being held at Columbus, Ohio, site of this year’s Men’s NCAA Volleyball Championships. Scores of the match were 25-18, 25-22, 25-17.

UCLA hit over .300 for each set and was led by freshman middle blocker Daenan Gyimah‘s 10 kills (.500). Senior middle Mitch Stahl added nine kills (.467). The second-ranked Bruins will now face top-ranked and defending national champ Ohio State on Saturday at 3 p.m. Pacific time (the match will be televised live by the Big Ten Network).

In set one, UCLA jumped out to an 8-3 lead behind the serving of Michael Fisher and JT Hatch. Penn State rallied to level the score at 9.Gyimah then helped UCLA regain control of the match with a block for a 16-13 lead and a pair of aces which moved the Bruins into a 20-16 advantage. A Stahl block, with Hatch, and another put away by Stahl gave the set to UCLA by a 25-18 margin. The Bruins outhit the Nittany Lions .346 to .148.

Hatch totaled five kills, two aces and a couple of blocks. Fisher finished with four kills, two blocks, seven digs and an ace. Micah Ma’a also had four kills, seven digs and two blocks. Smith recorded two kills, 19 set assists and four blocks. UCLA outblocked PSU 9.5 to 2.0. The Bruins will open up the home schedule next Thursday when they host No. 8 UC Irvine in a 7:30 p.m. MPSF match to be played in Pauley Pavilion.