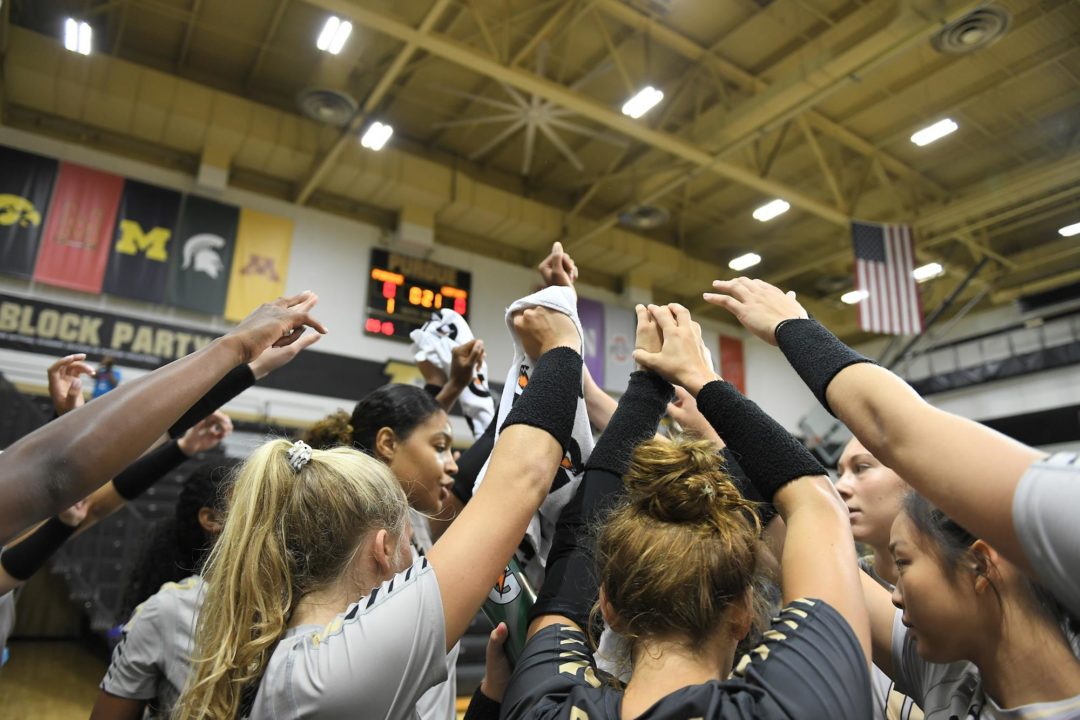 The Purdue volleyball team is prepared for its toughest test yet at Holloway Gymnasium when it hosts Wisconsin at 7 p.m. on Saturday, Sept. 29. Current Photo via Purdue Athletics

QUICK HITS
• Purdue’s home match against Wisconsin marks the fifth sellout for the Boilermakers this season. Purdue tallied sellout crowds against Notre Dame, Louisville, Illinois and Northwestern. Averaging over 2,000 fans per match, Purdue currently ranks seventh in the nation in attendance.
•  In its match against Maryland, Purdue had a trio of talented freshmen show their promise for years to come in middle blocker Grace Cleveland, defensive specialist Marissa Hornung and setter Hayley Bush. Cleveland powered the offense against the Terrapins with a career-high 15 kills on 32 swings for a .312 hitting clip. Bush propelled the offensive efforts with a match-high 43 assists, registering her seventh match of 40 or more assists.  Defensively, the Boilermakers were paced by Hornung’s career-best 16 digs.
• Offensively, Purdue is led by redshirt senior Sherridan Atkinson, who own 231 kills on the year, good for first among Big Ten opponents. In league play alone, she has already registered a conference-best 55 kills, 23 more kills than Iowa’s Cali Hoye’s second-place mark of 32. Overall, she has 893 career-kills, needing only 107 to become the 17th Boilermaker in program history to reach 1,000 kills.
• Sophomore Caitlyn Newton registered a career-best 16 kills with zero errors for a .667 hitting clip against Northwestern (Sept. 22), recording Purdue’s highest program hitting percentage in a four-set match with at least 20 or more attempts. Newton’s mark replaces former Boilermaker Melanie Ukovich‘s .655 (22-3-29) clip set against Mississippi State in 2003.
• Defensively, libero Brooke Peters guides the Boilermakers with a conference-best 270 digs on the year. The senior has registered 20+ digs in seven of Purdue’s matches this year. Overall, she has tallied 1,118 digs to become the 19th Boilermaker to surpass the 1,000-dig mark. Her total also ranks 13th in program history for most digs. She is two digs away from tying former Boilermaker Jill Whiteman (1987-1990) in 12th place with 1,120 digs. She is 127 digs away from breaking into the top-ten.

Scouting Wisconsin
The No. 5 Wisconsin Badgers stand at a 9-2 overall record and are 2-1 in conference play, coming off a 3-0 loss to No. 6 Minnesota on Wednesday. With the help from 6-foot-8 sophomore Dana Rettke, the Badgers lead the Big Ten with a .298 hitting percentage. Rettke leads the offense with 126 kills, at 3.32 per set. Assisting the Badgers offense is sophomore setter Sydney Hilley. Ranked second in the Big Ten, Hilley has recorded 430 assists on the season averaging 11.32 assists per set. Defensively, libero Tiffany Clark is first in digs with 161. Rettke leads the Big Ten in blocking, recording 65 on the season, at 1.71 per set.