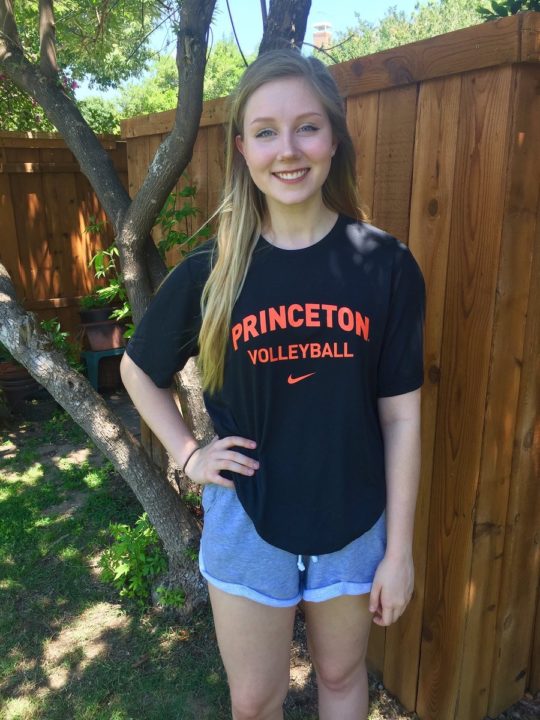 Outside hitter Grace Klepetka has committed to Princeton as part of the class of 2018. Archive Photo via Jodie Klepetka (@jodieklepetka)

High school senior and 5’11” outside hitter Grace Klepetka has committed to Princeton University as part of the Class of 2018.

It’s official!!! Grace will be continuing her acedemic and volleyball career at Princeton University!!! #gotigers pic.twitter.com/o3tlUXk50F

Klepetka currently attends Allen High School in Texas, who went 31-9 this past season indoors before falling in the UIL State Tournament. She was one of the top attackers for the team as well.

On the club side of things, Klepetka plays with Texas Advantage Volleyball. As part of the club, she plays for the 18 Black team.

Grace’s sister, Kate, was also a key player for Texas Tech this past season as a senior after transferring for her final season from Texas A&M Corpus Christi. She was recently named to the VolleyMob Dream Team after the Red Raiders finished as Runners-Up in the NIVC Tournament.

Princeton is coming off of a season in which they finished 18-8 and 10-4 in conference play. They then won the Ivy League Playoff over Yale to advance to the NCAA Tournament before falling to Iowa State. The 2017 roster contained six outside hitters, with three holding eligibility for other positions. Of that group of six, two graduate, leaving some spots open for Klepetka to help fill.