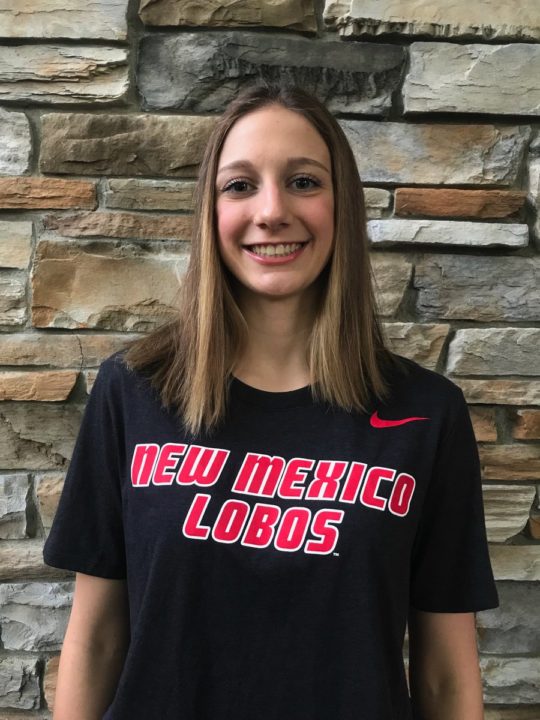 Class of 2019 recruit Alena Moldan has made her verbal commitment to the University of New Mexico women’s volleyball program. A 5’7″ defensive specialist/libero, Moldan would join the team for her freshman season in the fall of 2019.

A junior at Lakeville South High School in Minnesota, Moldan helped to push the Cougars to a 26-5 season in 2017. Individually, according to her MaxPreps profile, she notched 431 digs (4.8 per set), 54 assists (0.6 per set) and 39 aces (0.4 per set). Those numbers made her an honorable mention selection on the South Suburban Conference team. Video of some of her play can be seen here.

Moldan also plays with Mizuno M1 Volleyball Club and the 18-1 team. She owns a 7’6″ standing reach, a 9’0″ block touch and a 9’4″ approach jump. More highlights from her play can be seen here via her NCSA profile.

The commitment gives New Mexico its second for the class of 2019 that has been registered in the VolleyMob Recruiting Database. In that regard, Moldan joins outside hitter Brittnie Henige.

New Mexico is coming off of a 16-16 season in which they went 7-11 playing in the Mountain West Conference. They have two defensive specialists/liberos on their 2018 spring roster, one of which is set to graduate prior to 2019 when Moldan arrives.

Congratulations to 18-1 Alena Moldan on her verbal commitment to continue her academic and volleyball career at the University of New Mexico! #GoLobos @UNMLoboVB pic.twitter.com/aZjlRyaYTP

If you know of any volleyball commitments for collegiate volleyball (Beach, Men’s or Women’s), contact us with information at [email protected]