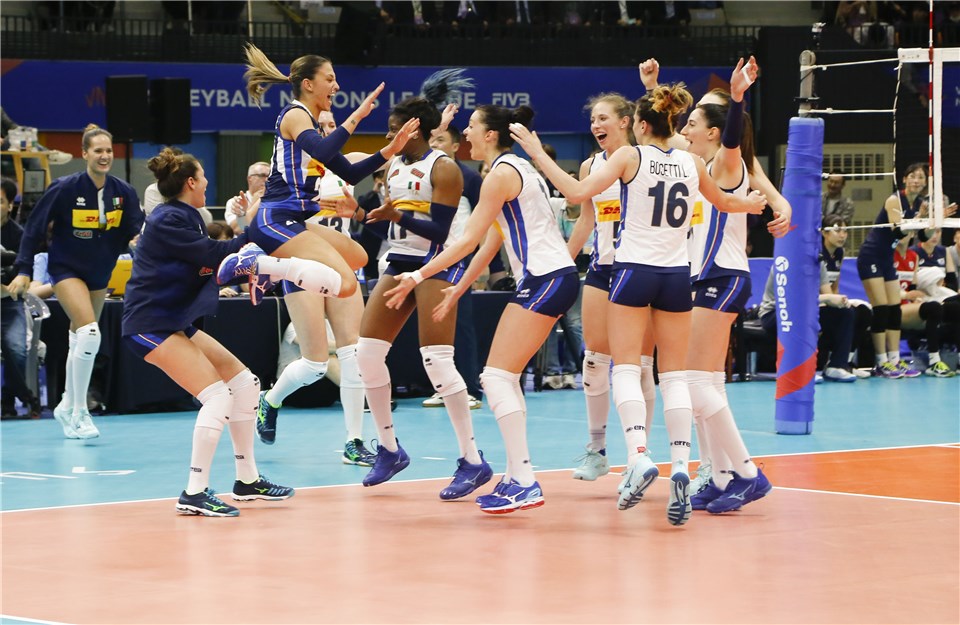 Russia used a strong block to get past Germany in four sets, while Italy's balanced offensive attack won the team its second straight, topping Korea in a sweep to wrap Volleyball Nations League Pool 6 play. Current Photo via FIVB

A 16-6 lead in blocks helped Russia overcome a 26-point effort by Louisa Lippman in a four-set victory over Germany to wrap Pool 6 play on Thursday.

Lippman downed a match-high 25 kills and an ace, but it was not enough to lift the Germans to victory. Lena Stigrot and Marie Scholzel added 10 points apiece. Stigrot notched 10 kills, while Scholzel posted seven putaways and a team-leading two aces. Maren Fromm also recorded seven kills to aid the offense.

Germany was the aggressor in Set 1, following Lippman and Scholzel’s lead to a 25-19 win, despite being tied at 16 midway through. Russia took the early lead in Set 2 and carried the momentum through out the rest of the match, fighting off the feisty Germans in late rallies to wrap up Sets 2 and 4.

Russia coach Pankov Vadim said: “Team Germany have strong and good spirits. I would like to congratulate the great German players. Especially the young and new players showed good performances. They fought through every moment in every match. I wish Germany full success in their next matches.”

Germany coach Felix Koslowski said: “First of all, congratulations to Russia. They managed things really well after the first set. As my captain said, we put a lot of pressure on them with our serves and we played really well in block and defense. We attacked in the way we had planned. I was very happy about the performance of my team. They showed a totally different spirit today. Then we lost our rhythm especially when receiving. I must complement our opposite spiker Louisa Lippman. I think she played a really amazing match today. Especially her block and defense were very good. I was really surprised in a positive way that the playing style of Russia was not high and slow anymore. They were playing at a first tempo. I really enjoyed the playing style of Russia. I hope we don’t need to play them soon again.”

Germany captain Maren Fromm said: “In the first set we were able to play as we planned. We put a lot of pressure on the Russia team with our serves. And in the second set we managed to focus on defense but we had a lot of faults because of the high blocks from the Russian team, which was always their strength.”

A balanced offensive attack, led by Serena Ortolani and Miryam Fatime Sylla guided Italy to an upset of homestanding Korea on Thursday.

Only Yeon Koung Kim managed double-digit scoring for Korea, turning in 17 points with 15 kills and two blocks. Next in line on the scoresheet were Su Ji Kim (8 points, 6 kills, 2 aces) and Joengah Park (6 points, all kills).

Italy racked up 53 kills to Korea’s 37 and outserved its foe 5-2. The Italians also boasted a slight 5-4 edge in blocks.

Set 1 was a back and forth affair with Korea scoring six straight to take a brief lead, but, in the end, Italy was too much and Ortolani issued the final blow. The Koreans did not go away in Set 2, however, rallying to within one at 20-19, but again falling short. The teams were knotted at 12 midway through Set 3 before Ortolani and Sylla took over, guiding the Italians to victory.