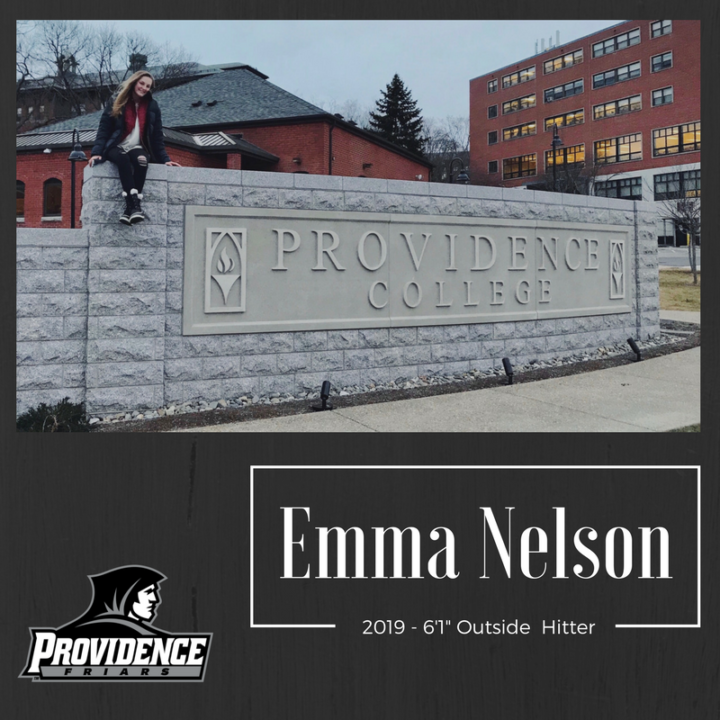 High school recruit Emma Nelson has committed to Providence as part of the class of 2019. A 6’1″ outside hitter/opposite, Nelson is a junior in high school.

A native of Pennsylvania, Nelson attends West Chester Bayard Rustin High School. She was a key piece in Bayard Rustin finishing 19-4 and 12-1 in league play as she posted 4.9 kills per set on a .315 mark, 2.4 digs per set, 0.5 aces per set and 0.4 blocks per set this season.

Nelson has been with the varsity team since her freshman season. All of her career and individual season stats can be seen here via her MaxPreps profile.

In addition to her play at the high school level, Nelson plays with EC Power on the club side of things. She was with EC Power 16 Empire last year and her entire recruiting profile with jump measurements and videos can be seen here via NCSA.

Providence is coming off of a 17-16 season in which they went 6-12 in Big East action. They had four players who can play outside hitter in 2017 with zero right sides. Of that group, there are no seniors and one junior – meaning one departure prior to Nelson’s arrival.

? ? Congratulations to Emma Nelson! She has decided to commit and continue her volleyball career at Providence College!! #ecpcommitt pic.twitter.com/flping9e4q