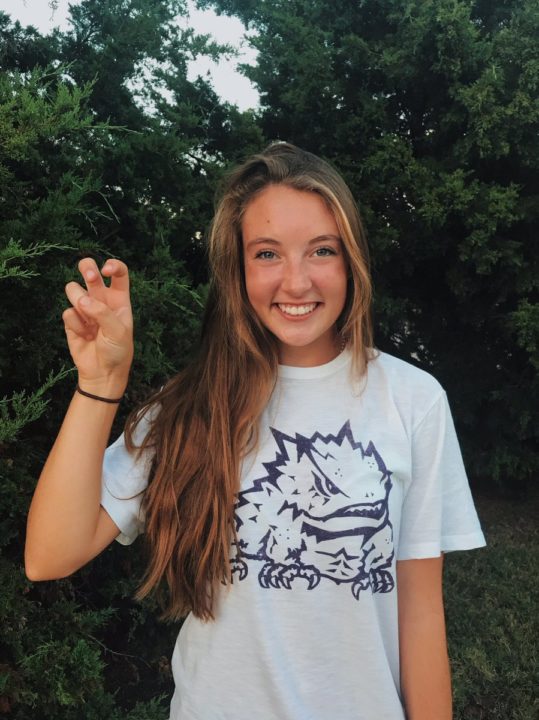 Class of 2020 recruit Maddie Speicher has made her collegiate intentions known in committing the the Beach team of Texas Christian University. A current sophomore at Lovejoy High School in Texas, Speicher also plays for the USA Volleyball A2 HP Beach Team.

so humbled and excited to announce my verbal commitment to play beach volleyball for TCU and continue my education!!?? #fearthefrogs pic.twitter.com/wu4NOZej9Z

At Lovejoy High School, Speicher is a 5’7″ defensive specialist. As part of a 30-9 (8-0 in District) team to this point, Speicher has posted 2.6 digs per set according to her MaxPreps page.

On the beach side, where she will be playing at TCU, Speicher earned three top-five finishes over the summer. That includes winning the USA Volleyball – National Team/High Performance Lewisville Girls Level 3A Zone 16U Sand event in June.

Some of the highlights from this past year in the sand for Speicher can be seen below via her YouTube page.

Last season TCU Beach finished 18-8 in just their third season of play after an 0-11 year in 2015 and an 18-7  finish in 2016. As the season approaches, the 2018 roster features 15 people on their roster. Of that, two are freshman who should be seniors by the time Speicher arrives.