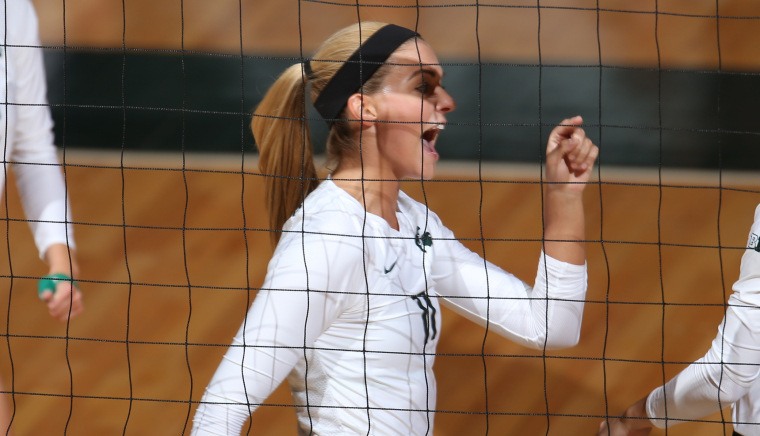 The 21st-ranked Michigan State Spartans overcame 21 kills from Maryland freshman Gia Milana to take a 3-1 victory over the Terrapins on Saturday.

Michigan State matched their best defensive performance of the season, recording 12 team blocks – including 7 from Alyssa Garvelink. The versatile 6’4″ junior leads the team with 1.23 blocks/set this season, over half-a-block higher than anyone else on the team, and is also 3rd in kills. She raised both of those averages with 9 kills on an efficient .421 hitting percentage for 12.5 total points.

The Terrapins, meanwhile, continued to lean heavily on their freshman Milana – setting her up for 44 swings. Only 4 freshmen in the country have seen more attacks-per-set this season than she has, and she also pulled out 11 digs for her 6th-career double double.

Milana put on a show for a large cheering section in attendance – she’s a native of Romeo, Michigan, which is about a 90 minute drive east of East Lansing.

While the present is a winless Big Ten season for Maryland so far, the future is bright – freshman setter Taylor Smith had 35 assists, 6 digs, and 3 aces on the night.