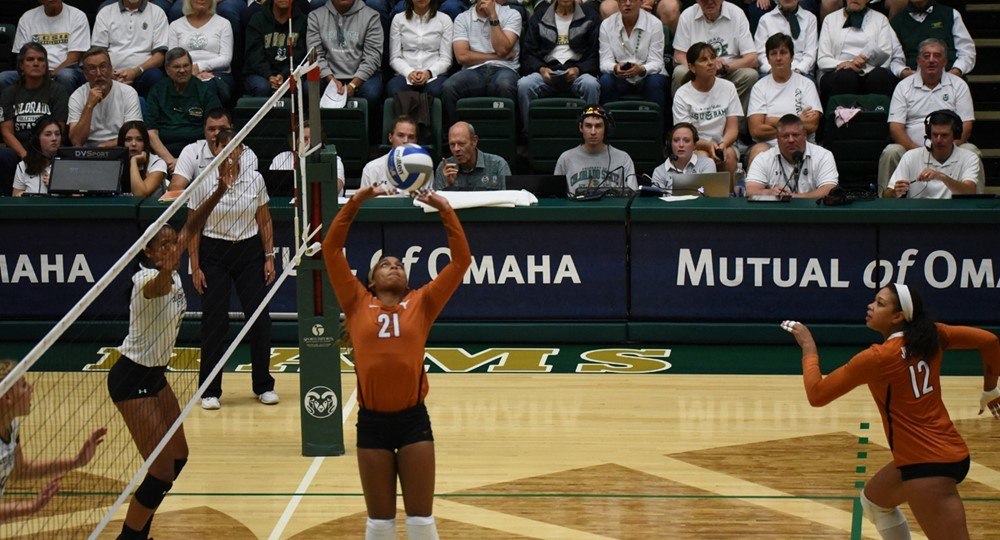 Longhorn senior Ebony Nwanebu put down 20 kills to lead the team, freshman Micaya White had 17 and senior Paulina Prieto Cerame contributed 11. The team combined for a hitting percentage of .346.

The Shockers Jody Larson posted 19 kills, and Abbie Lehman put down 13 on a .650 hitting percentage.

Despite the loss, the Shockers led the Longhorns in numerous categories, kills (63-61), aces (4-2) and assists (60-55), a lack of errors is what kept Texas from dropping the match.

The first set was tight early, as neither team led by more than two until the Longhorns went on a 5-0 run behind kills from Nwanebu and Johnson to lead, 22-17. The Shockers responded with back-to-back points, but the Longhorns finished the set, 25-20.

Wichita State started the third set with a 6-2 lead and maintained a comfortable spread until the Longhorns chipped away and followed with a 5-0 run to take a 12-11 lead. But the Shockers did not fold and went on a 3-1 of their own to take a 19-16 lead. Texas kept it close and answered with a 4-1 run, but Wichita State stayed strong to take set three, 25-23.

Texas will return to Gregory Gym to host No. 16 Texas A&M on Wednesday, Sept. 14 at 7 p.m. The match will be televised live on Longhorn Network with a live pregame show beginning at 6:30 p.m.

Jody Larson led the Shockers with 19 kills, while Abbie Lehman had 13 kills and hit .650. Emily Hiebert had 50 assists, 11 digs and six kills, while Giorgia Civita had 19 digs.

The two teams traded points early in the first set until a kill by Jody Larson and a service ace by Tabitha Brown put the Shockers up 12-10. Texas scored three-straight to take a 13-12 lead and then used a 5-0 run to increase the lead to 22-17. UT went on to win the set 25-20.

The Shockers used a couple blocks and kills from Lehman and Hiebert to take a 5-2 lead in the second set. The Longhorns answered with a 6-0 run to go in front 8-5 and they increased the lead to 16-9 after a Shocker ball handling error. WSU responded with two kills from Mikaela Raudsepp and a block from Larson to pull within 16-12. A kill by Brown cut the lead to 21-17, but UT won the set 25-22.

A Hiebert kill gave WSU an early 8-4 lead in the third set, but the Longhorns used a 5-0 run to take a 12-11 lead. The two teams traded points until two-straight kills from Raudsepp gave WSU a 15-13 lead. A Lehman kill increased the lead to 20-17, but UT scored five-straight to take a 22-20 lead. WSU tied it at 22 on a block by Raudsepp and Hiebert and went in front 23-22 on a kill by Larson. WSU won the set 25-23 after kills from Hiebert and Larson.