No. 1 Nebraska Remains On Top With Sweep Over New Mexico 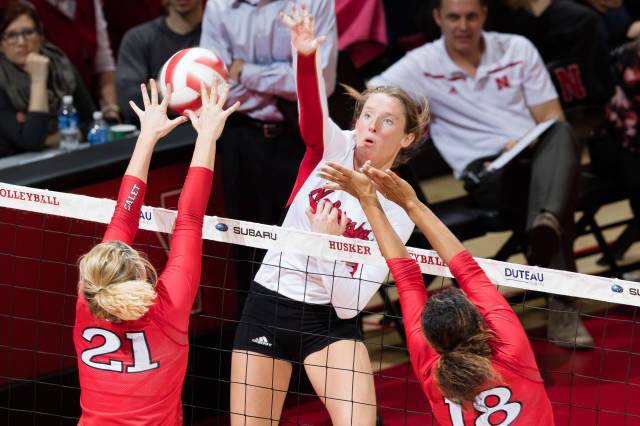 Three Huskers made the all-tournament team with big performances in the match. Andie Malloy led the squad with 14 kills, hitting .385, Kadie Rolfzen contributed nine kills of her own and a match-high 16 digs, and Kelly Hunter posted 39 assists, seven digs and four blocks.

Rolfzen moved to 11th on Nebraska’s career kills list with 1,256.

The Huskers return home for the Ameritas Players Challenge next weekend. New Mexico finish up nonconference play at the UT Arlington Invitational next weekend.

Andie Malloy led the Huskers (6-0) for the second straight match with 14 kills on .385 hitting and was selected to the all-tournament team. Kadie Rolfzen added nine kills and a match-high 16 digs and was named the most valuable player of the tournament. She moved to 11th on Nebraska’s career kills list, now with 1,256. Kelly Hunter was also on the all-tournament team with 39 assists, seven digs, four kills and four blocks.

Amber Rolfzen tallied eight kills with no errors for .667 hitting on the night and also had three blocks. Mikaela Foecke had eight kills, and Briana Holman had five to go with her match-high six blocks.

Cassie House had 12 kills to lead the Lobos (6-3), who finished second in the tournament with a 2-1 record.

The Huskers outhit the Lobos .311 to .110 and had a 9-5 edge in blocks. Five of the nine blocks came in the final set as the Huskers finished the match on a strong note. Nebraska served five aces and fell victim to just one from the Lobos. NU had a 43-38 lead in digs.

Set 1: The Huskers went up 6-4 on an Amber Rolfzen kill. Holman won a joust at the net to make it 8-5, and back-to-back kills by Holman and Kadie Rolfzen forced a UNM timeout at 11-8. Holman continued her strong start with two more kills to put NU up 13-9, and Malloy connected for one to make it 14-9. Another Malloy kill and a Kadie Rolfzen ace pushed the lead to 17-10. An ace by Sydney Townsend gave the Huskers a 20-13 advantage, but New Mexico pulled within 21-18 after a 5-1 run. Kadie Rolfzen pounded a kill and then combined with Holman for a block to make it 23-18. Kadie Rolfzen gave the Huskers set point at 24-20 with her fourth kill, and NU ended it 25-22 on a tip kill by Malloy. The Huskers hit .371 in the first set, while New Mexico hit .312.

Set 2: Foecke put up a kill and an ace early to help give the Huskers a 5-2 lead. The Lobos won a long rally to even the set at 9-9, but a tip kill by Kadie Rolfzen and kill by Amber Rolfzen off an overpass regained a 13-11 lead for the Big Red. The Lobos answered with the next three points to go up 14-13 before Kadie Rolfzen squared things up with her sixth kill. Hunter then dumped a kill to put the Huskers up 15-14 at a media timeout.  But New Mexico came right back to go up 16-15. Hunter and Amber Rolfzen combined for a block for a 17-16 NU lead. The tip continued to work in NU’s favor as Foecke put one down to make it 18-17. An ace by Hunter extended the lead to 20-18. Foecke added a kill, and a block by Holman and Malloy made it 22-19. Malloy sent her eighth kill to the floor for set point at 24-20, and NU won its first set point after UNM hit long. Both teams cooled off in the second set, as NU hit .146 and New Mexico hit .029.

Set 3: Malloy posted an early kill and Hunter and Amber Rolfzen combined for back-to-back blocks as the Huskers built a 7-3 lead. NU continued to showcase its block when Holman and Kadie Rolfzen teamed up for one to make it 12-6. Malloy tacked on her 11th kill and Justine Wong-Orantes served an ace for a 17-8 lead. Nebraska pulled away and finished off the sweep with a resounding 25-14 win. In the final set, the Huskers tallied five of their nine blocks and hit .565.

Up Next: The Huskers return home for the Ameritas Players Challenge next week. Nebraska will play two matches on Friday – against Montana State at Noon and Gonzaga at 8 p.m. The Huskers will finish non-conference action against Creighton next Saturday at 8 p.m.

ALBUQUERQUE, N.M. — Behind thousands of fans, the University of New Mexico volleyball team battled against No. 1 Nebraska Saturday night, falling in straight sets to close out the Lobo Classic in WisePies Arena.

Bolstered by a supportive crowd announced at 4,473 fans — the fourth-best in program history — the Lobos (6-3) pushed the defending NCAA champion Cornhuskers (6-0) in the first two sets, eventually yielding in the third set.

“It was everything we hoped for,” 10th-year head coach Jeff Nelson said. “Obviously we’re a little disappointed, particularly with game three. But the week as a whole was an amazing tournament. Everybody did such a great job. The crowd tonight was so exciting.”

The crowd was certainly a factor for New Mexico, as thousands of fans came out to The Pit to support the Lobos.

New Mexico finished second in its second home tournament, collecting wins over Arkansas and Montreal (in an exhibition match). House and senior Julia Warren were also named to the Lobo Classic All-Tournament Team.

The tandem paced UNM against the Huskers, as House tallied 12 kills and three blocks and Warren posted nine kills and nine digs.

But the Lobos showed well defensively with 38 digs to Nebraska’s 43, and played competitively with the Huskers through the first two sets. Both teams hit under .250 before intermission, with the Lobos giving Nebraska a run early.

“This did nothing but make us better,” Nelson said. “We battled tough point-for-point in the first two games. We served great, and we talked about stressing them with our serving. We did a great job with that.”

Nebraska opened the match hot, taking an 8-5 lead. The Lobos fought back to make it a one-point game at 8-9 before the Huskers reeled off an 8-2 run to take a 17-10 lead.

But New Mexico wouldn’t yield, riding good serving from Warren as it cut the Nebraska lead to three points at 21-18. UNM would hold off two Husker set points late, but eventually fell 25-22.

House notched four kills on a .375 hitting percentage in the first frame, with Victoria Spragg chipping in three errorless kills. Warren also added three kills, with Mariessa Carrasco registering two of her own.

The Lobos rallied in set two, playing Nebraska exceptionally close. There were 11 ties and five lead changes in the second set, including a deadlock at 18-18. 12 of UNM’s points came from Husker errors, with House (six kills) and Warren (two) providing the rest of the Lobos’ production.

However, Nebraska would gain separation late, posting a set-clinching 7-2 run to win 25-20.

“I think this shows us the level that we’re capable of playing at,” House said. “… It definitely showed us that we can compete, and that we’re able to push those kind of teams.”

After intermission, Nebraska began to exert itself, taking a 10-5 lead. The Lobos would struggle to find consistent offense, scoring successive points just once, as the Cornhuskers claimed a 25-14 win in the final set.

Nonetheless, the Lobos acquitted themselves well against an exceptionally talented Nebraska team. New Mexico was the only team this year outside of Florida to score at least 20 points in multiple sets vs. Nebraska.

“We had nothing to lose,” House said. “We were going to swing big and high. All of us together made the commitment to just play as best we could and leave it all out on the floor.”

The Lobos return to action next weekend as they wrap up nonconference play with four matches at the UT Arlington Invitational. UNM’s first match is against Houston Baptist at 12:30 p.m. on Friday.