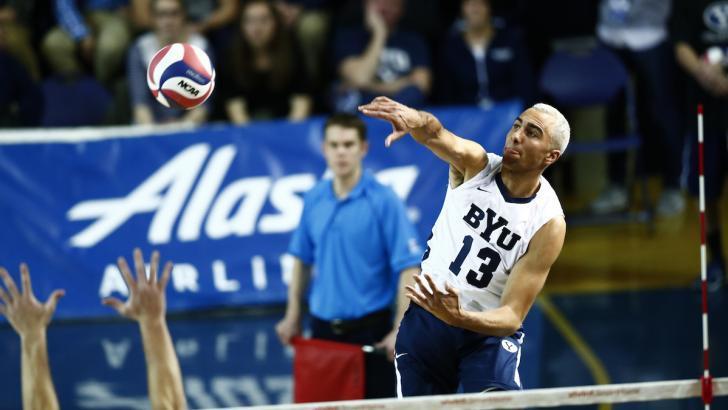 The #4 BYU Cougars knocked off Concordia (Irvine) 3-0 on Saturday night at home at the Smith Fieldhouse. The home team topped the Eagles on the latter’s second game of a back-to-back double header. Earlier in the evening, Concordia lost to McKendree 3-2.

BYU hit just .118 in the first set, but recovered to hit .520 in the second set. In the 3rd, they stumbled again to just hit .152, and were out-hit by Concordia in the final set (.214), but the Eagles struggled at the end to finish the match in favor of BYU.

Concordia came to the brink of winning the third set and forcing the game to continue, but fell apart with a 24-20 lead. BYU scored the last 6 points of the game: 5 of which came on Concordia errors (1 service, 3 attacks, and one bad set).

BYU opposite Ben Patch, a Provo native, had a game-high 16 kills on a .303 hitting percentage. Patch returned from his mission trip last year to earn AVCA First Team All-America honors and has picked up his pace again this year with 67 kills  in just 12 sets this season. He’s hit over .300 in every game in 2017.

Jonathan Predney had 10 kills for Concorida-Irvine, with just 3 errors on 22 attempts for a .318 percentage. Hunter Howell had 4 blocks for the Eagles, who as a team had 11 blocks to just 6.5 for BYU.

Patch led the Cougars (3-1) with a game-high 16 kills on a .303 clip in three sets of play. The senior also recorded two service aces. Langlois finished the match with 13 kills, as well as two service aces and six digs. Joseph Grosh and Leo Durkin led the defensive effort with three blocks apiece, with Durkin also tallying 32 assists.

BYU ended the match with a .239 clip in comparison to a .145 clip by Concordia Irvine (5-5). The Cougars also tallied five service aces to the Eagles’ two.

Both teams battled back and forth through the first set. Concordia Irvine took the 8-6 lead off of a BYU service error. The Cougars then rallied, scoring three-consecutive points to tie the game at 9-all. With multiple BYU service errors, the Eagles pulled ahead 20-18. A Patch kill tied the set at 22-all. On an attack error by Concordia Irvine, BYU pulled ahead late 24-23. With a block by Durkin and Price Jarman, the Cougars won the set 25-23.

The Eagles opened the second set on a 5-2 run. Backed by multiple kills from Patch and Langlois, the Cougars then went on a 10-1 run to take the 12-6 lead, forcing an Eagle timeout. Concordia Irvine closed the spread to four, 15-11, but BYU regained the six-point 21-15 advantage on a kill by Miki Jauhiainen. A service error by the Eagles ended the set 25-17 in the Cougars’ favor. Patch led all players with 11 kills after two sets of play.

Concordia Irvine took the early 4-0 lead in the third set, forcing a Cougar timeout. Recording his 12th kill of the match, Patch put BYU on the board, 6-1. The Eagles led through the majority of the set, with their largest lead being eight. The Cougars closed the gap to four, 22-20, on a kill by Patch. BYU rallied back from a 24-20 deficit to win the third and final set 26-24 on a Concordia Irvine attack error.

BYU will continue play at home against McKendree on Saturday, Jan. 14, at 7 p.m. MST. The match will be broadcast live on BYUtv and BYU Radio – Sirius XM 143. Links to live stats can be found on the BYU men’s volleyball schedule page.

Press release not available at time of posting.