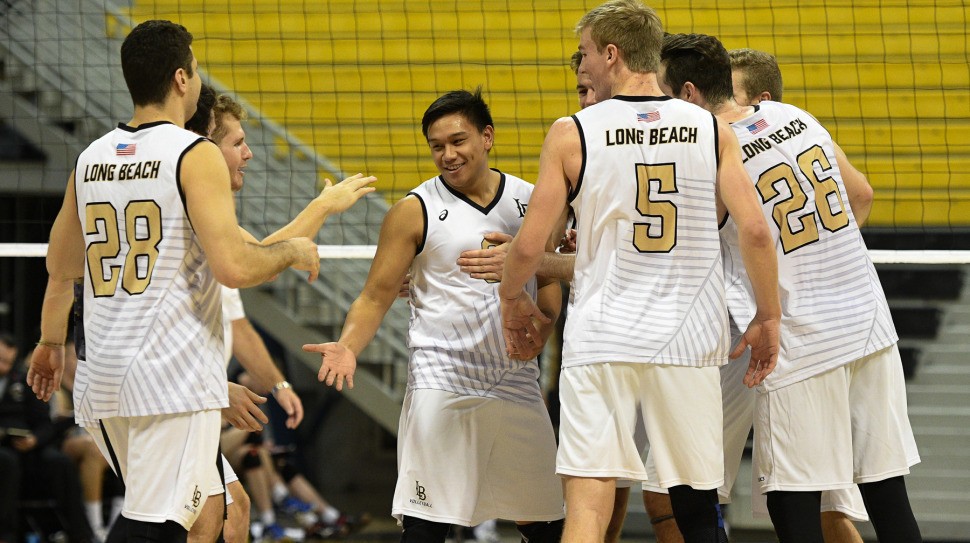 The Beach were led by a sophomore tro – Kyle Ensing who recorded his first double-double of the season with 24 kills and 10 digs. TJ Falco added 22 kills, six digs and four blocks, while setter Josh Tuaniga handed out a match-best 67 assists and four digs. Bryce Yould put down an additional 12 kills on a .625 hitting percentage. In the back court, Andrew Sato picked up a match-best 13 digs.

“I’m a big fan of what it took for us to get back into that match and get the momentum that took a lot of grit and a lot of fight,” Long Beach State head coach Alan Knipe said. “It wasn’t pretty, but there was a heck of a commitment to not give up and not go away easily.”

Long Beach State was led offensively by the sophomore trio of Kyle Ensing,TJ DeFalco and Josh Tuaniga as the 49ers hit .338 as a team in the contest. Ensing led the way with a season-high 24 kills – just three off of his career-best – while DeFalco also notched a season-best 20-kill effort with 22 on the night. Tuaniga paced the offense with a career-high 67 assists as he set the tone for the Beach offense that saw three 49ers reach double-figures with Bryce Yould (12 kills) rounding out the group.

Ensing was also solid on defense with 10 digs to notch his first-double-double of the season. He helped senior libero Andrew Sato set the tone for the backrow as Sato led the team with 13 digs.

At the net, Amir Lugo-Rodriguez posted nine blocks (one solo, nine assists), while Ensing and DeFalco each added four.

In the first two sets, the Beach came up just short as they dropped 25-23 and 25-21 games, respectively, to Hawaii. LBSU struggled to find its rhythm in the first two frames as they hit .286 in the first set and .143 in the second with a sideout percentage of 60 or lower in both games.

“We made a few adjustments; put Kyle back on the right,” Knipe explained. “Unfortunately for the lineup we started, tonight was a serve and passing battle. That’s the challenge of playing early in the season. We prepared for a totally different lineup.”

The Beach fell behind early in the fourth set as Knipe called a timeout trailing 10-5. The break in action allowed the 49ers to regroup and make the adjustments they needed to come out and take a 16-15 edge on the Warriors forcing Hawaii into a timeout.

The fourth set saw 14 ties, nine lead changes and 10 set-points as the two teams battled each other until the score was deadlocked at 31-31. The Beach took advantage of a pair of attack errors by the Warriors as they went on to win the fourth set, 33-31, forcing a fifth and deciding game.

In that frame, Ensing knocked down nine kills on 16 attempts with just one miscue to hit .500.

“Kyle was an enormous part of our success as the match went on,” Knipe said. “He was a handful from the front row and the back. He has the ability to play like King Kong and he looked like it in the last three sets. I was impressed with his performance, but not surprised.”

Ensing continued his hot-hitting into the fifth set as he knocked down five kills on seven attempts with just one error for a .571 attack percentage. The Beach also got three kills from DeFalco as they hit .647 in the frame en route to a 15-10 victory.

Hawaii hit .274 in the match and was led by Rado Parapunov’s 23 kills. Also in double-figures for the Warriors were Austin Matautia (16 kills) and Patrick Gasman (12 kills). Jennings Franciskovic dished out 58 assists, while Larry Tuileta recorded 12 digs.

Long Beach State and Hawaii will face off again on Friday, Jan. 20, at 7 p.m., at the Walter Pyramid.