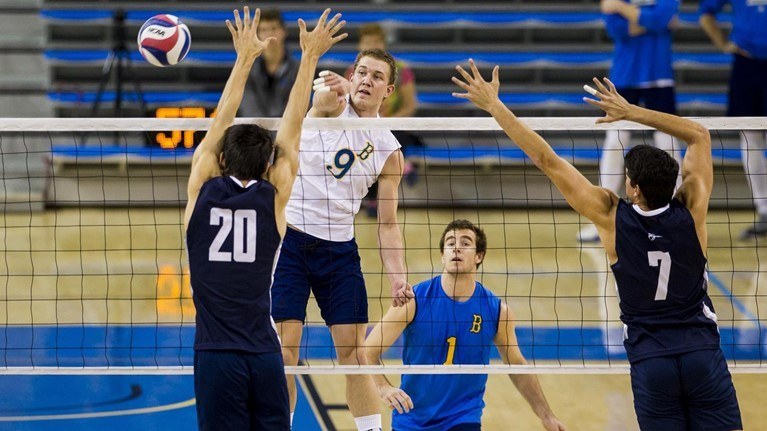 #2 UCLA remains undefeated in MPSF with a three set sweep over Cal Baptist, which was led the Bruin JT Hatch who put down 13 kills. Current Photo via UCLA Athletics

#2 UCLA remains undefeated in MPSF with a three set sweep over Cal Baptist, which was led the Bruin JT Hatch who put down 13 kills.

Daenan Gyimah added another 10 kills for the Bruins, while Jackson Bantle picked up six digs. Setter Micah Ma’a dished out 20 assists along with two aces.

UCLA’s No.2-ranked men’s volleyball team captured its third straight match to open the Mountain Pacific Sports Federation (MPSF) schedule in a 3-0 win over Cal Baptist on Wednesday night in Pauley Pavilion. Scores of the match were 25-21, 25-17, 25-22. UCLA, which was led by the 13-kill effort of junior outside hitter JT Hatch, improved its overall record to 5-1 on the season. The Bruins will now host USC on Friday night at 8 p.m. in Pauley Pavilion.

UCLA took home set one behind the six kills of freshman middle Daenan Gyimah. The Bruins opened with a 4-1 spurt but were caught by the Lancers at 7 and again at 10-all. The serve of sophomore Micah Ma’a led to a 3-0 run and handed UCLA a lead it would not surrender in a 25-21 win. The Bruins hit .619 for the set.

Six kills from Hatch helped UCLA secure set two. With the score tied at 8-all, a kill by senior middle Mitch Stahl, a block by Hatch and Stahl and a pair of aces from junior outside hitter Jake Arnitz lifted UCLA into a 12-8 lead. The Bruins then pulled away late in the set for a 25-17 decision. Stahl and Ma’a also had service aces in the set for the Bruins who hit .429.

In set three, senior Hagen Smith‘s kill broke a 5-all tie. Arnitz and Stahl followed with a block and the Bruin had the lead in the set for good. The Lancers closed to two points several times down the stretch, the last at 24-22. However, a big swing from Hatch ended the match at 25-22.