#5 Hawaii Tops Grand View In Second Meeting Over The Weekend 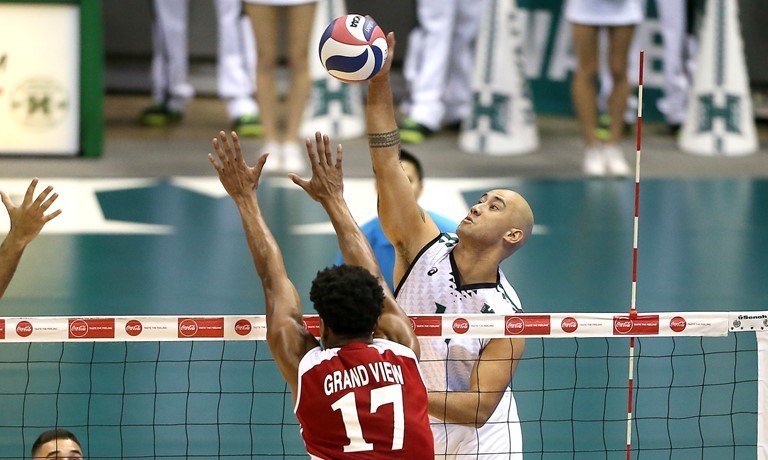 #5 Hawaii takes down Grand View for the second time over the weekend in a four set match.

Hawaii was led by Rado Parapunov with 11 kills, while Larry Tuileta and Stijn van Tilburg each added 10. Setter Joe Worsley dished out 30 assists and 10 digs for a double-double.

The University of Hawai’i men’s volleyball team completed the series sweep of Grand View, the NAIA’s top-ranked team, Sunday in a 25-16, 25-13, 19-25, 25-23 non-conference victory at the Stan Sheriff Center.

Unlike Friday’s match in which UH won in straight sets, GVU was able to take a set off the fifth-ranked Rainbow Warriors (8-2) and nearly sent the match to a deciding fifth set. Hawai’i extended its home win streak to 11 straight dating back to last season and ran its win streak over non-conference teams to 19.

Head coach Charlie Wade started a different lineup in each of the four sets as the Warriors hit .308 for the match with eight service aces and 10.5 blocks. UH held GVU (3-2) to .123 hitting.

Parapunov continued where he left off on Friday going 5-for-5 in kill attempts as the Warriors built a 16-10 lead in Set 1. UH pushed it lead to 23-15 after a Tuileta ace and closed out the set with an ace by Hendrik Mol.

UH got off to a slow start in Set 3, falling behind 16-12 after the Vikings strung together six straight points off the serve of Felipe Rosa. GVU extended its lead to 21-15 and sided-out for the 25-19 victory.

Hawai’i responded to the challenge in Set 4, jumping out to a 13-5 lead behind four kills by van Tilburg. Moments later, the Vikings reeled off six straight – three off Cardoso aces – to pull within 15-13. Trailing 21-18, the Vikings rallied to tie it up at 21 then again at 22 and 23 before van Tilburg closed out the match with consecutive kills.

The Warriors continue their homestand by hosting UC Santa Barbara in a two-match MPSF series Friday, Feb. 3 and Saturday, Feb. 4. Both matches begin at 7:00 p.m., at the Sheriff Center.