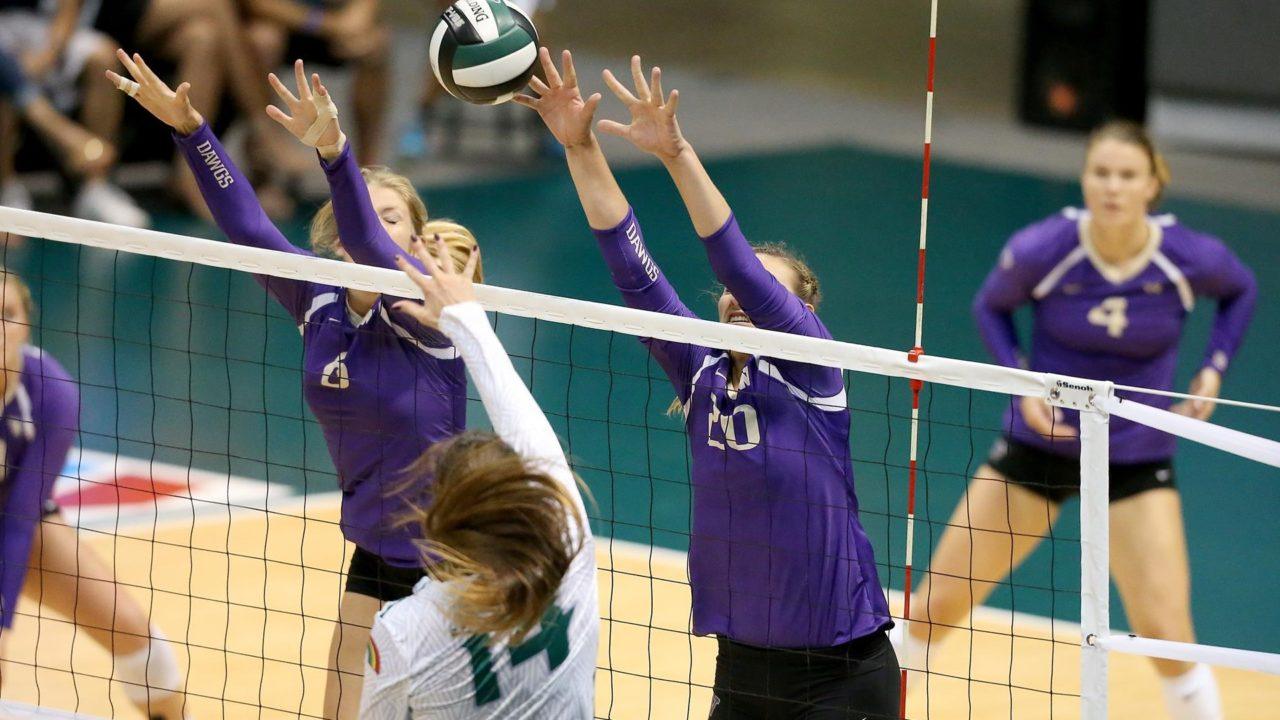 The Huskies posted a season-high 14 blocks in a three set match, Crissy Jones and Kara Bajema each had six block assists. Tia Scambray lead the way for Washington offensively with nine kills.

The Huskies hit for .237 in the match, holding Maryland to just .041 hitting percentage.

Washington will conclude nonconference play against Oklahoma at 5pm. Maryland will face Oklahoma at 2pm, before taking on No. 21 Southern California at 11pm ET.

LOS ANGELES – A season-high 14 blocks in just three sets helped the fifth-ranked Husky volleyball team to a sweep of Maryland in its first match at the Pac-12 Challenge, a four-team invite hosted by USC at the Galen Center. Washington improved to 9-0 with the 25-17, 25-21, 25-17 victory over the Terrapins (7-3).

On the blocking effort, Head Coach Keegan Cook said, “We saw some improvement from all of our players on understanding the scouting report and executing, so I think that was the bright spot for us. I think Maryland is a good rising program and we saw them do some good things around the net, but all-in-all an underwhelming performance from us today. Win or lose, I’d like to see us play with greater enthusiasm.”

Courtney Schwan put away a Terrapins overdig for the first Husky point and then she bump set Scambray for an offspeed kill up the line for 2-0. The teams were even after eight points, with Scambray going off the block from the left for a 5-4 Husky lead. Jones floated the first ace for the Dawgs to make it 7-4. Schwan and Bajema grabbed the first stuff block of the day for 9-5. A transition kill from Jones from the back row extended the Husky lead to 11-6. Jones tipped for a kill and then Maryland clipped the antenna for 15-10 at the media timeout. A roof from Jones and a transition kill off the block touch for Scambray made it 17-11 and the Terrapins took time. Kara Bajema put down a slide set from Tanner for 19-12. Moments later, Avie Niece got a kill on the quick for 21-15. Jones hammered once and it was overdug, then Tanner set her a second time and she put it to the court for 22-16 and Maryland took its last timeout. Carly DeHoog subbed in out of the break and picked up a kill on the right side and a Maryland error made it set point. Scambray ended it by tooling the block for the 25-17 victory. The Huskies hit a hot .467 in set one, with Maryland at .192. Scambray put away six kills in the set on 10 swings to hit .500 and Tanner had 12 assists.

The teams traded some service errors early in the second set, with Bajema getting the first kill for the Dawgs on another slide for 4-4. Cailin Onosko subbed in and served a couple points for the Dawgs. Schwan ended a messy play around the net by leaping for a block and an 8-5 edge. The teams continued siding out back and forth, with Bajema paintbrushing one for a kill to get to 11-8. The Terrapins got a four-point run with a few blocks to take a lead, 11-12, and the Huskies used their first timeout of the evening. The run hit six points before Scambray earned a much-needed stuff to snap it, and then Bajema got another roof to pull UW back within one at 13-14. The Dawgs tied it back up at 15-15 as Niece tapped down a continuation off the block. Another block for the Dawgs got them back up one, 16-15, and prompted a Maryland timeout. The Terps broke the run, but Schwan answered with a rocket crosscourt to the floor. A Maryland free ball was hammered down by Niece and then Jones denied a tip attempt as the Dawgs jumped ahead, 20-16, on a 4-0 run, prompting the final UMD timeout. Maryland came back with three straight points and had a swing to tie it up, but Jones and DeHoog denied it for 21-19. Tanner found Bajema on a slide to bring up set point at 24-21. After a brief back and forth, Maryland got in the net on a Scambray swing to finish it in UW’s favor, 25-21. The Huskies hit just .057 in the set but Maryland finished at .000 in part because of the six blocks the Dawgs posted in set two, two solos and two assists coming from Schwan.

The blocking picked up right where it left off in set three, as Jones stuffed the first point for the Dawgs and Niece got a solo block in the middle on the second point, followed by a quick kill for a 3-0 lead. Another big roof from Jones made it 5-2 and the Terps called the early timeout. Schwan hit hard off the block and out as the Dawgs maintained a three-point lead at 9-6. A perfect dig from Schwan on a Maryland blast let Tanner find Jones on the right for 12-9. Scambray crushed down a block to make it 14-9. A creative tip from Tanner on second contact fell for 16-12, and then Schwan dropped one into the campfire for 17-12 and Maryland took timeout. Schwan let rip on the left for 20-14 Dawgs. Jones and DeHoog sent another Terrapin swing back down with authority and then DeHoog served an ace to make it 23-16. Jones connected on the right to get the Dawgs to match point, and UW converted its first chance on a Maryland setting error, finishing it off, 25-17. The Huskies hit .214 in the final set and with five more blocks, put Maryland into negative numbers at -.029. Jones had three kills on four swings, four digs and three blocks in the final set.

Washington will wrap non-conference play tomorrow night in the Galen Center against a talented Oklahoma team with only one loss so far. The Huskies and Sooners go at 5:00 p.m. live on the Pac-12 Networks.

LOS ANGELES, Calif. –Junior middle blocker Hailey Murray and sophomore outside hitter Liz Twilley each hit over a .400 clip as the Maryland volleyball team (7-3) fell to No. 5 Washington (9-0) in straight sets on Thursday evening in the Galen Center. The Huskies won by set scores of 25-17, 25-21, 25-17.
“Washington played well and clearly deserved to win,” head coach Steve Aird said. “I thought we played well for stretches but we made too many errors. We will watch film, regroup and get ready for two great teams tomorrow.”

Murray hit seven kills on a .429 clip while adding five blocks. Twilley notched eight kills on a .467 hitting percentage while freshman outside hitter Gia Milana led the match with 10 kills.

Murray, Twilley and senior middle blocker Ashlyn MacGregor posted kills before Myers and MacGregor combined for a block at 20-15. Twilley and Milana each tallied kills late, but the Huskies were able to close the set, 25-17.

The Terps challenged the Huskies in game two as the set featured seven ties and three lead changes. The teams traded errors early to tie 4-4 before Washington took an 8-5 lead with a block. Myers notched a kill to pull within two and two kills from Milana kept Maryland within two. The Terps used four straight blocks to tie the set and take the lead, 13-11. Washington responded with a pair of blocks to pull within one, 14-13.

The Huskies worked out to a 20-16 lead, forcing a Maryland timeout. Milana and MacGregor posted the team’s sixth block of the set at 20-18 and combined for another at 21-20 as the Terps stayed with Washington. After a Milana kill, the Huskies used a 3-0 run to end the set, 25-21.

Washington controlled the third set early, posting a 3-0 lead before pulling ahead 5-2. MacGregor notched a solo block to pull within two, 8-6. The Terps continued to trail by a couple before a 3-0 Husky run put them ahead 14-9. After a Milana kill, another 3-0 run put Washington up 17-12. Milana and Twilley posted late kills as the Terps fought to stay within the match, but Washington was able to use a 5-1 run to win the set 25-17.

The Terps face Oklahoma on Friday at 2 p.m. ET before facing host No. 21 Southern California in the Pac-12 Challenge finale at 11 p.m. ET.