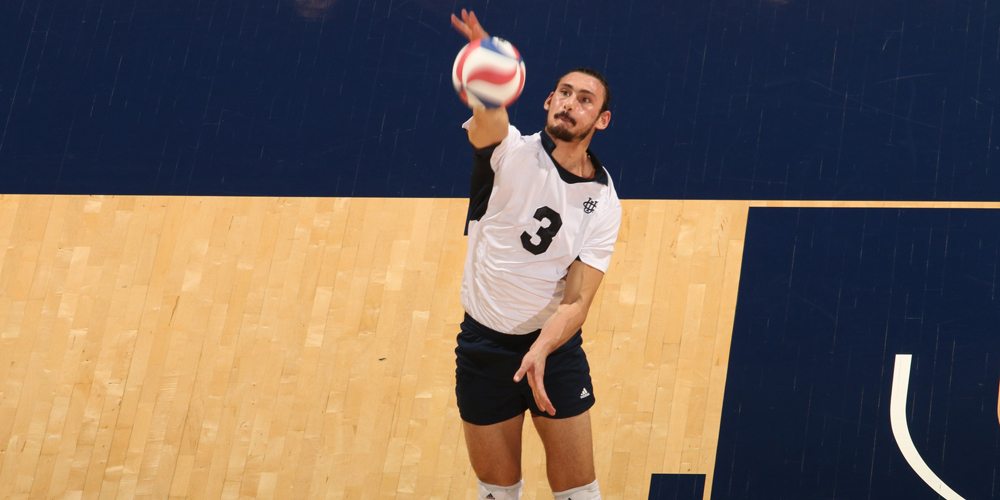 #6 UC Irvine has no trouble sweeping through Saint Francis, with senior Thomas Hodges leading the way with 12 kills, three digs and two blocks.

Saint Francis was able to take a quick 7-4 lead in the second set, but the Anteaters responded by scoring the following eight points to lead 12-7. They never lost their groove the remainder of the second, building a 22-11 lead that eventually ended in a 25-17 loss for Saint Francis and UC Irvine taking the 2-0 lead in the match.

The third set was made up of runs that kept the Anteaters on top, leading to a 17-12 advantage for UC Irvine. A couple of Saint Francis errors cost them big, dropping the set and match 25-15.

In the match, Saint Francis recorded zero blocks on that match, while UC Irvine posted 10.

Leading the Anteaters was Hodge, followed by Tamir Hershko with nine kills and four digs. Dillon Hoffman picked up a match-best seven digs.

With the score tied 6-6, a pair of kills by Matthew Younggren and one by Tamir Hershko was followed an ace by Thomas Hodges to take a 10-6 lead and force a Saint Francis timeout. Back-to-back kills by Younggren and Hodges extended the lead to 18-12. The Anteaters would lead 23-18 before SFU would score five of the next six points to creep within 24-23, causing UCI to call a timeout. A Saint Francis attack error would end the set, 25-23 for the Anteaters.

The Red Flash took an early 4-7 lead in the second set. UCI would respond with the next eight points, including a pair of kills by Hershko and an ace by Younggren, 12-7. Consecutive aces by Michael Saeta bumped the lead to 15-9. A 4-0 run which was capped by an ace by Tucker Pikula built a 22-11 advantage. For the second consecutive game, UCI wins on a SFU error, 25-17.

The Anteaters took the first set, 25-23, behind four kills from Matthew Younggren.  SFU was led by Kniffen’s four kills.

After a service error by Stadick tied the set at 6-6, the Anteaters gained separation with four straight points, off two kills by Younggren, one by Hershko and an ace by Hodges.

A kill by Hodges helped UC Irvine to its largest lead of the set, 18-12, but SFU scored six of the next nine points to cut the deficit to three, 21-18.  The Red Flash got kills from Kniffen, Bennett, Ford and Braswell during the run.  UCI extended its lead back to five, 23-18, but kills by Buck and Kniffen brought SFU within one, 24-23, before an attack error ended the set.

UC Irvine claimed the second set, 25-17.  Hodges led the Anteaters with five kills in the set, with Koubi adding four.  Saeta had two aces.  Braswell and Kniffen each had two kills, while Buck had an ace.

The Red Flash scored seven of the first 11 points of the set, including two kills by Braswell and one by Kniffen.  However, UC Irvine answered with an 8-0 run to take a 12-7 lead.  Hershko had two kills during the run, with one each by Hodges and Stadick and an ace by Younggren.

A kill by Braswell and an attack error by Koubi brought SFU back within three, 12-9, but the Anteaters tallied 10 of the next 12 points to push its lead to 22-11.  Hodges had three kills during the UCI run, with Koubi and Stadick each adding one.  Saeta landed two aces, with Tucker Pikula contributing one.

Two attack errors and two service errors, as well as a kill by Kegerreis and an ace by Buck, allowed SFU to cut the deficit to 24-17, but a service error closed out the set.

The Anteaters closed out the match with a 25-15 win in the third set.  Hodges led UCI with five kills, with Hershko adding four.  Kniffen led the Red Flash with six kills and Braswell had one.

UC Irvine scored the first four points of the set, including kills by Hershko, Hodges and Stadick and extended its lead to five, 8-3, on a kill by Hodges.  The Red Flash scored five of the next seven points to close within two, 10-8, behind a kill by Kniffen, two attack errors and two service errors.  The Anteaters led by four or five for the next few points before five straight points extended their lead to 23-14.  Two errors by SFU helped UCI to close out the set win.

The Red Flash returns to action on Saturday, March 18 when it hosts California Baptist at 4 p.m.  SFU defeated CBU, 3-0, on January 6.