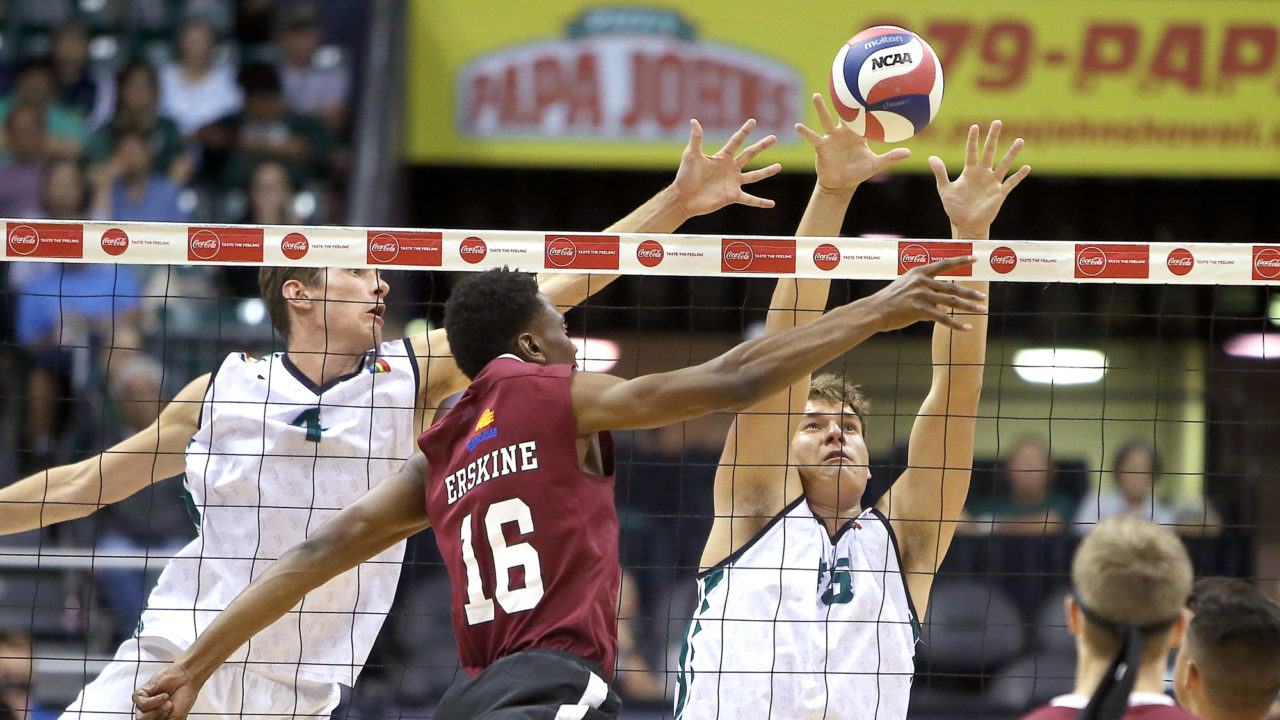 Hawaii starts off the new season in dominating style, by sweeping Erskine in three sets. Current Photo via Hawaii Athletics

Hawaii starts off the new season in dominating style, by sweeping Erskine in three sets.

Putting down a match-best kills was Isaac Lanier with seven, while Daniel Fralix added five.

The University of Hawai’i men’s volleyball team successfully opened the 2017 campaign with a dominant sweep of Erskine, 25-11, 25-17, 25-9, Thursday on the first day of the 23rd Outrigger Resorts Invitational at the Stan Sheriff Center.

The Rainbow Warriors (1-0) needed only 73 minutes and played 16 active players with new lineups in each set. UH won its season-opener for the fourth straight season and extended its Outrigger Invitational win streak to four matches.

In the win, Hawai’i tallied 13 service aces and hit .451 while limiting the Flying Fleet to .015 hitting. UH also out-blocked Erskine 8.5 to 1. Transfer Larry “Tui” Tuileta started the match at libero and finished it as an outside hitter, totaling five thundering kills, two digs, and two aces.

Freshman sensation Austin Matautia displayed his lethal serving with four of the team’s eight aces in the opening set. UH served five aces early on with setter Jennings Franciskovic and middle blocker Henrik Mol with two a piece to take a 15-7 lead. Matautia ripped three aces during a four-point stretch as the Warriors took the opening set 25-11.

Head coach Charlie Wade emptied his bench to start the second set. The Flying Fleet showed signs of life, sticking with the Warriors for the first part of the game before UH took over. A 4-1 run gave Hawai’i a 16-12 lead and they wouldn’t look back as freshman Rado Parapunov and sophomore Brandon Rattray each posted five kills while middle blocker Dalton Solbrig added three kills and four blocks.

Tuileta ignited the UH offense in the third set, with five kills in attempts and served the final seven points of the match.

The tournament continues on Friday with Ball State taking on Erskine in the opening match at 4:00 p.m., followed by UH and Princeton at 7:00 p.m.