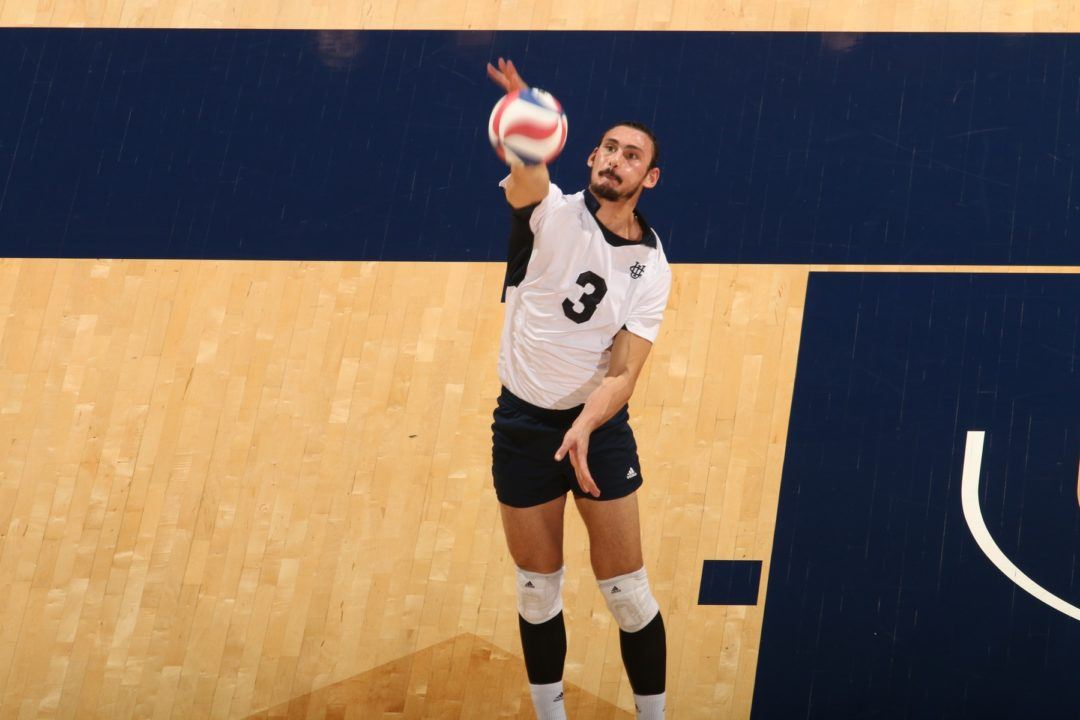 #7 UC Irvine holds off #13 CSUN in a thrilling five set battle after dropping the first set.

For CSUN, Arvis Greene hammered down 17 kills, while Dimitar Kalchev added 15. In the back court, CJ Suarez picked up a match-best 12 digs.

The Anteater block was impressive tonight with a 15.5 to 5.5 advantage over the Matadors. UCI snaps a two-match losing skid and improves to 9-5 overall and 6-4 in the MPSF. CSUN is also 9-5 on the year, but 2-5 in MPSF action.

UCI would hold the largest lead of the first set, 11-8, on a Michael Saeta ace. CSUN would tie the game at 14-14 and the teams would continue to sideout until the Matadors had a kill by Dimitar Kalchev and a UCI attack error to move in front 23-21. Teams would trade points once again with the Matadors ending the set 25-23. Both teams were on fire offensively with CSUN hitting .474 and the Anteaters hitting .455. UCI out-blocked CSUN 3.5-0.

The Anteaters would continue to dominate the net with another 3.5 blocks in the second set. Two of the blocks helped the Anteaters open 14-11 lead and another by Scott Stadick and Karl Apfelbach extended the lead to 19-16. UCI would win the set 25-21 on a kill by Thomas Hodges and a CSUN attack error.

CSUN would hold an 8-4 lead until the Anteaters went on a 6-2 run to knot the score at 10-10 on a block by Stadick and Tamir Hershko. Back-to-back Anteater attack errors gave CSUN the slight 21-19 lead. A kill by Hershko and another UCI block tied the set back up at 21-21.  A Matador attack error and a kill by Hodges gave UCI the win 25-23.

CSUN scored five in a row, including two aces and two UCI errors to open a 17-10 lead. That was all the Matadors needed as they won the set 25-19 and forced a fifth set.

The Anteaters opened the fifth set with a 4-1 lead which included back-to-back blocks. Consecutive UCI errors helped CSUN creep to 8-6, but Hodges rolled a kill softly in the middle of the court to stop the momentum. A flying kill from the backrow by Hershko and two Matador errors, the last a block on match point gave UCI the set 15-9. Hershko dominated the fifth set, going 7-0-7 in kills. UCI hit .692 (10-1-13) in the final set, while CSUN hit .000 (4-4-12).

UCI will take a week off and return to action hosting UCLA Feb. 24 at 7:00 p.m. in the Bren Events Center.