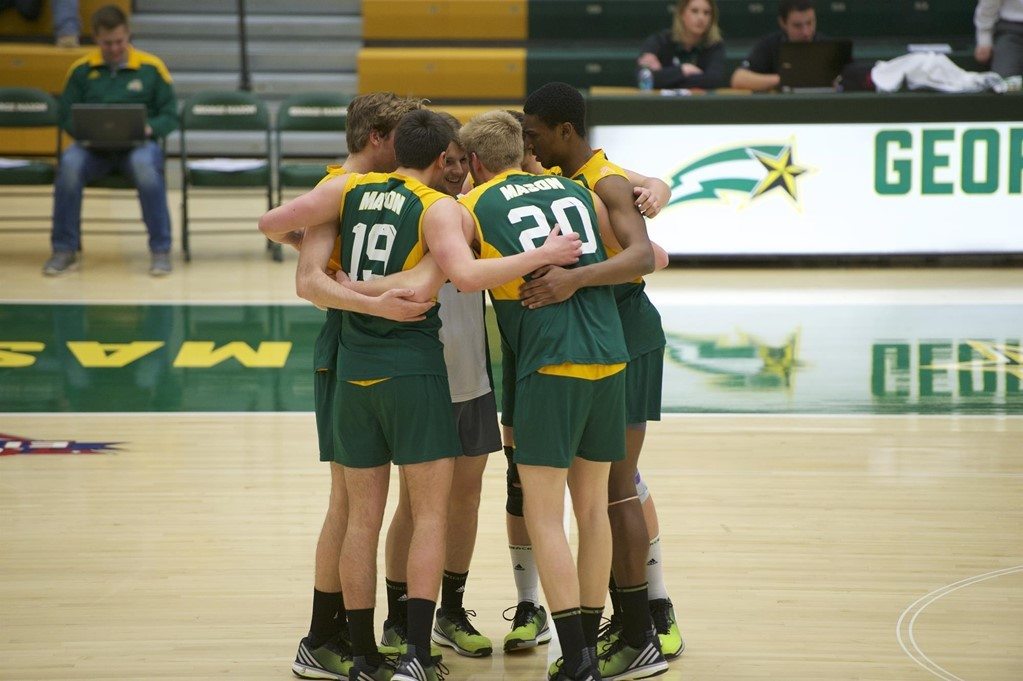 George Mason men’s volleyball’s extended stay at Harvard due to an incoming snow storm became as pleasant as it could be after Mason swept the Crimson on Sunday in episode two of the EIVA doubleheader between the two teams.

-With the weather conditions in the area progressively worsening, a decision was made on Sunday morning for the contest to be pulled back two hours and to start at 2 p.m.
-Mason matched the score from its last triumph in the Malkin Athletic Center, which came five years and two days ago. Assistant coach Joe Norton, who was in his senior season as a player back then, is the only remaining member from that roster.
-The trio of seniors which led Mason in Saturday’s dramatic five-set defeat came up big for the Patriots again and led the team to success – libero Johnny Gomez had a match-high performance once again with eight digs on the defensive end while opposite hitter Jack Wilson (16 kills, 2 service aces, .370 hitting) and outside hitter Radoslav Popov (14 kills, .600 hitting, 1 ace) carried the weight offensively and combined for 30 of the Patriots’ 43 kills.
-Popov did well to spread his efficiency among the two sets that he played, recording seven kills and hitting identical .600 in each.
-Eight out of the 10 Mason players who featured in the match scored points. Even Gomez picked up the first kill in his career after an overpass by him was underestimated by the Harvard defense and landed on the floor.
-Although Mason had a quite large number of service errors (17), the Patriots’ attack efficiency (.380) did not allow the Crimson to repeat its impressive blocking performance from Friday, allowing for only 5.5 Harvard blocks.
-Mason’s redshirt senior middle blocker Graham Gresham and his redshirt sophomore partner in the middle Langston Payne were credited with the only two solo stuffs in the match with one apiece.  Four additional Patriots contributed to the total of six blocks by head coach Jay Hosack‘s team.
-Harvard (.189) hit half as well as Mason and none of its players reached the double-digit threshold neither in kills nor in digs. Casey White’s nine kills with no errors came the closest while Erik Johnsson had eight. White led his team defensively as well with six digs and had match-high three blocks, a feat matched only by his teammate Riley Moore (3 kills, 1 dig).

-Mason came out motivated after the unfavorable result from the night before and quickly took control of the opening set, going into double digits with a four-point lead after a kill by Wilson. Another successful play by Wilson gave Mason its largest lead of six at 18-12, which was one less than the lead the team had when it grabbed its first set point at 24-19. Despite three points being the closest they were within their opponents thus far, the Crimson made a late run on Matthew Ctvrtlik’s serve and came within one at 24-23, calling two Mason timeouts in the process. The second of those finally ended the run and the Patriots finally closed out the set on their fifth attempt with Wilson’s third and most important kill of the set, 25-23.

-With the teams all square at eight all in the second set, Mason went on a 7-1 run that had a little bit of everything – four kills, two blocks and an ace. When Gomez’s historic kill made the score 15-9, Harvard’s head coach Brian Baise decided he had seen enough and called for a timeout. After the play resumed, Mason’s lead grew to eight with kills by Wilson and Payne and ultimately that was the margin with which the set was decided on Popov’s final kill of the match, 25-17.

-A service ace by Johnsson gave Harvard a 2-0 lead – the Crimson’s largest – in the third set. A 3-0 Mason run followed and gave the Patriots enough momentum to control the tempo until mid-set, when Harvard went on a 5-1 run to take the lead with an ace by Ctvrtlik, 14-13. The Patriots responded with four unanswered points to grab a three-point lead for the last lead change in the match, 19-16. Harvard came within one at 21-20, but a service error by Moore gave away the gathered momentum. Nerves got to the Harvard players later on and an attack error by Brad Gretsch (6 kills, 5 digs) gave Mason a triple match point at 24-21. Harvard’s final timeout only allowed the team to neutralize one of those match points before a Wilson kill closed the match at 25-22 for the Patriots’ first regular-season win against the Crimson since 2014.

“We turned a corner today and responded to yesterday’s [defeat] with a solid performance from everyone. Getting back in the win column is a good thing but showing our grit and flat out competing is what I am most proud of.” – Mason head coach Jay Hosack

“With such a quick turnaround from last match to this one, it’s all about grit and determination. Our guys just stayed focused on the result of playing each point at a time.”

Mason closes out the lengthy road trip with EIVA contests at NJIT and Princeton next weekend.