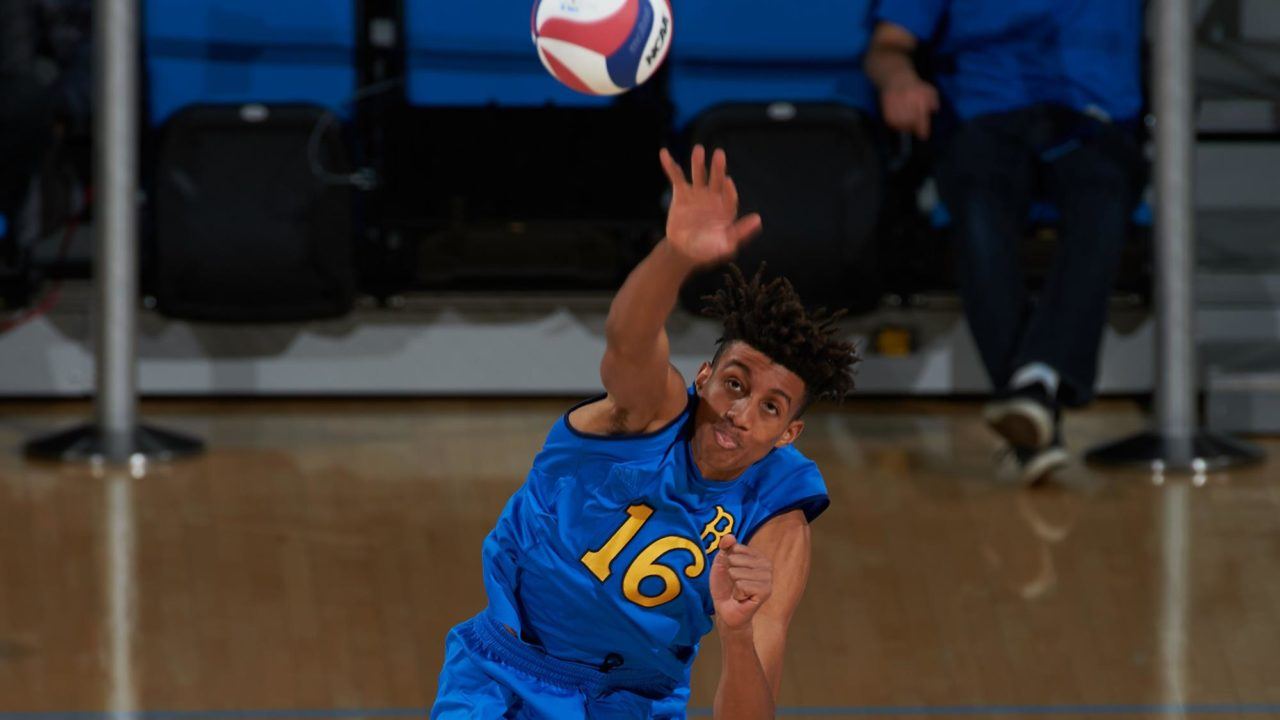 Daenan Gyimah logged 17 kills on 18 swings as part of a strong UCLA attack in a 3-1 Bruins win over #7 Pepperdine. Archive Photo via UCLA Athletics

Los Angeles, California – In a critical match for the MPSF title race, the seventh-ranked UCLA Bruins took down the sixth-ranked Pepperdine Waves in four sets. It was more strong home play for UCLA, who improves to 10-1 at home – where six of their final seven matches will be – versus 6-4 on the road.

While BYU sits atop the league standings, the victory for UCLA keeps them within two of the loss column while dropping Pepperdine three back. The match also could have some at-large implications for the NCAA Tournament as we approach the final stretch.

One man that UCLA couldn’t hold down was Pepperdine star David Wieczorek, who led the team with 16 kills and hit .419. The Bruins defense didn’t allow any other Waves to make a huge impact though, as the other players for Pepperdine combined to hit just .176.

The week isn’t over for either team now, as UCLA plays host to #14 George Mason on Saturday. Pepperdine will also be at home on Saturday, as they will take on #4 Loyola Chicago in Malibu.

The No. 5-ranked UCLA men’s volleyball team used a career-high 17 kills from Daenan Gyimah to deal No. 7 Pepperdine a 3-1 setback in a Mountain Pacific Sports Federation match played at Pauley Pavilion on Wednesday night. Scores of the contest were 25-17, 17-25, 26-24, 25-17. The Bruin sophomore middle blocker compiled his 17 kills on 18 swings while hitting an incredible .889. The Bruins are now 16-5, 5-2 in MPSF action. Pepperdine falls to 10-5, 4-3. UCLA hit .412 as a team for the night, with only three attack errors combined over the final two sets.

In set one, UCLA moved in front 7-4 after a Dylan Missry kill. Pepperdine closed to 10-8, before the Bruins ran off the next four points with Oliver Martin serving an ace for the final tally in the stretch. The Waves pulled to 16-12 only to see kills by Jake Arnitz and an ace from Gyimah restore order. Gyimah’s fifth kill of the set ended the frame at 25-17. The Bruins hit .538 for the set.

The Waves took early control in set two at 5-8. The Bruins closed to 8-10 after a Wave error, but Pepperdine scored the next two points and went on to pull away to a 12-19 lead. After some late Bruin errors, Pepperdine captured the set 17-25 while outhitting the Bruins .467 to .190.

In set three, Pepperdine once again moved out to a 5-8 advantage. UCLA battled back to even the score at 10-all and that set off a back-and-forth battle to end. Neither team led by more than one point down the stretch. The Bruins moved to set point at 24-23 only to see the Waves fight off danger with a tip kill. Gyimah’s spike put UCLA in front to stay at 25-24. A swing from Arnitz provided the winning point. Both teams hits over .350 in the set.

UCLA found their block in set four. A wall by Missry, Micah Ma’a and Gyimah made it 5-2 Bruins. Christian Hessenauer and Martin teamed up for a block to push the margin to 10-6. UCLA led 15-7 after back-to-back blocks by Gyimah / Arnitz. The Bruins enjoyed a 17-10 advantage after Arnitz tied his season-high with a 13th kill. A Martin / Ma’a block lifted the Bruins into an eight-point lead. Points 24 and 25 in the set came from Gyimah in a 25-17 win. UCLA hit .444 to .111 for the Waves.

The Bruins will host George Mason, the first-place team from the Eastern Intercollegiate Athletic Conference, on Saturday night at 7 p.m. in Pauley Pavilion.

After the Mountain Pacific Sports Federation loss against the Bruins (16-5, 5-2 MPSF), the Waves (10-5, 4-3 MPSF) return home on Saturday against No. 6 Loyola Chicago for a 5 p.m. matchup in Firestone Fieldhouse.