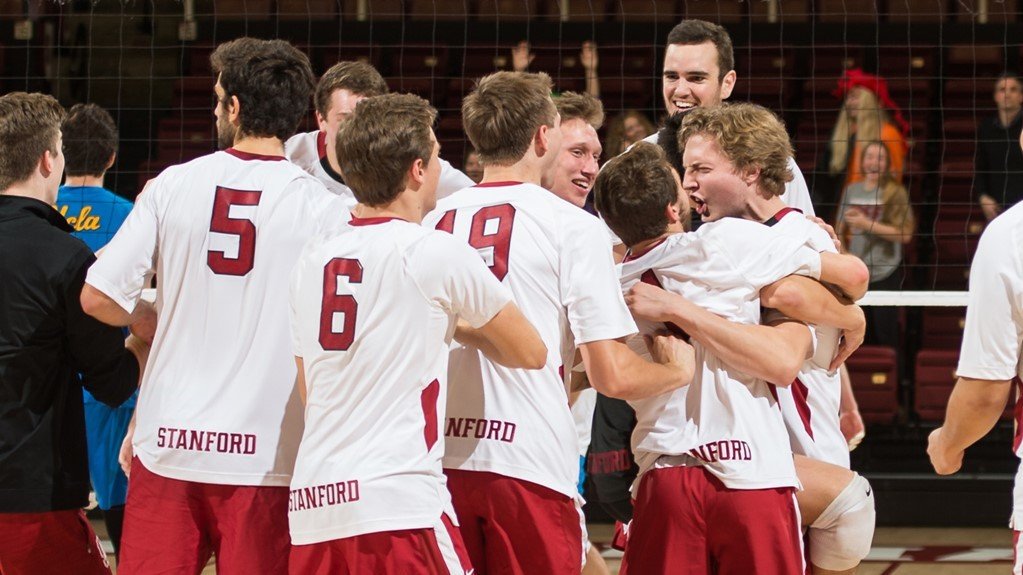 With UCLA still down Jake Arnitz, a starter for the team, #8 Stanford was able to take advantage, battling through the Bruins to a five set victory. Current Photo via Stanford Athletics

With UCLA still down Jake Arnitz, a starter for the team, #8 Stanford was able to take advantage, battling through the Bruins to a five set victory.

The Cardinals took a hard-fought first set at 29-27, but faltered in the next two, allowing the Bruins to take the 2-1 lead. Not giving up, Stanford fought back to take the fourth at 29-27 again, followed by the fifth and deciding set at 15-11, to take down the top-five foe.

For Stanford, three players hammered down double-digit kills – Jordan Ewert (22), Mason Tufuga (19) and Gabriel Vega (10). Setter Kyle Dagostino produced a double-double in the match with 48 assists and 11 digs. In the back court, Evan Enriques picked up 10 digs.

Injury-riddled UCLA, struggled but kept up with the Cardinals in the match, not executing when needed. Mitch Stahl made a comeback for the team after sitting out with an injury last weekend producing nine kills on a .750 hitting percentage. Jake Arnitz is still unable to participate due to his injury.

Let's revisit match-point from tonight's win over No. 4 UCLA » https://t.co/I4q8gtYEqV

Led by sophomore outside hitter Jordan Ewert, who finished with a career-high 22 kills on .439 hitting, Stanford (7-4, 4-2 MPSF) rallied from a 2-1 deficit to top UCLA (9-4, 6-3 MPSF) in the only regular-season meeting between the two teams this season. It was Stanford’s first five-set match in 2017.

Stanford steadily improved its offensive efficiency throughout the match, posting a .356 attack percentage overall while UCLA hit .333. Both teams committed its share of service errors – UCLA (29), Stanford (25), and each team put down three aces. UCLA held a 9.5 to 8.5 edge in blocks.

Freshman opposite Mason Tufuga, who made his first collegiate start against the Bruins, registered a career-best 19 kills on .394 hitting, five digs and three blocks. Redshirt senior outside hitter Gabriel Vega added 10 kills and four digs for the Cardinal.

Stanford’s middle blockers, redshirt junior Kevin Rakestraw and freshman Stephen Moye, each tallied seven kills, while Rakestraw totaled four blocks and Moye had three. Three of Rakestraw’s blocks came on Stanford set-points. In the first and fourth sets they were solo, while he teamed up with freshman Paul Bischoff to finished off the Bruins on match-point in the fifth.

Junior Kyle Dagostino started at setter for the second time this season. The Tampa, Florida native racked-up a season-high 48 assists and 11 digs for just the second double-double by a Stanford player this season. Junior libero Evan Enriques collected 10 digs and a career-best five assists, marking his fourth double-digit dig performance this season.

UCLA was led by JT Hatch and Dylan Missry, who totaled 19 and 13 kills, respectively. Senior setter/opposite Hagen Smith posted a double-double with 12 kills and 34 assists. The Bruins have now dropped three consecutive matches.

Stanford wraps-up the week on Saturday, Feb. 11 against No. 12 UC Santa Barbara. First serve is scheduled for 7 p.m. from Maples Pavilion.