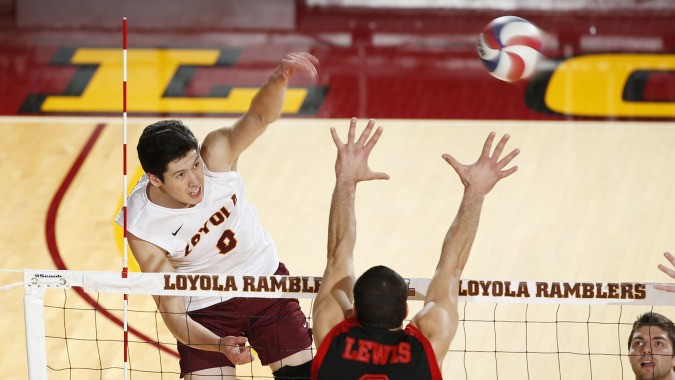 The #10 Loyola-Chicago men's volleyball team took down McKendree in a three set sweep for their fourth straight win. Current Photo via Loyola-Chicago Athletics

The #10 Loyola-Chicago men’s volleyball team took down McKendree in a three set sweep for their fourth straight win.

For McKendree, Maalik Walker put down 13 kills, while Nolan Pueter added 10 kills and six digs. In the back court, Zach Thompson picked up eight digs.

In Short
Ben Plaisted and Collin Mahan combined for 16 kills and Loyola University Chicago hit .301 (31-9-73) for the match en route to a 25-23, 25-16, 25-22 victory over McKendree (5-9, 1-3 MIVA) tonight at Statham Center. The win is the tenth-ranked Ramblers’ fourth in a row and improves them to 7-3 overall and 3-0 in Midwestern Intercollegiate Volleyball Association play heading into a big showdown with No. 1 Ohio State on Saturday.

How It Happened
Loyola was the beneficiary of several McKendree errors at the outset of the first set as the visitors jumped out to an early 9-5 advantage. The host Bearcats picked themselves off the mat and went on a 15-8 run that was capped by a Nolan Rueter kill to seize a 20-17 lead. Mahan halted the Bearcats’ momentum and ignited a set-closing 8-3 Rambler run, totaling a pair of kills during that stretch, to help Loyola rally for a 25-23 victory.

Everything went the Ramblers’ way in the second set as the Maroon and Gold hit a whopping .500 (11-0-22) to roll to a 25-16 win and 2-0 lead in the match. Loyola was clinging to an 11-10 advantage, but a Bearcat error, followed by consecutive blocks from Ian Cowen and Jeff Jendryk gave the Ramblers some breathing room. Following a service error that cut the LU lead to three, the Ramblers tallied five of the next seven points to bust open a 19-12 lead and never were threatened the remainder of the set.

McKendree wouldn’t go down without a fight and surged to a 17-14 lead in the third set before Loyola mounted a rally. Plaisted sparked a string of four straight points with a kill and later teamed with Jendryk on a block as the Ramblers claimed an 18-17 edge.

The teams would exchange points until Jendryk gave Loyola the lead for good with his seventh kill of the evening. A Bearcat hitting error doubled the Ramblers’ lead to 23-21 and after McKendree cut the deficit in half, Plaisted answered with a kill and then combined with Paul Narup on a block that gave LU a 25-22 victory and its fourth straight win.

Inside The Box Score
– Mahan and Plaisted led a balanced Loyola attack with eight kills each.
– Jendryk tallied seven kills and six blocks.
– Cowen handed out 31 assists and added six digs and three blocks.
– McKendree was led by Maalik Walker’s 13 kills.
– Loyola has won all six of its all-time meetings with McKendree, sweeping the Bearcats in each outing.

Up Next
Loyola heads to Columbus, Ohio, to face top-ranked Ohio State on Saturday (Feb. 11) at 6 p.m. Central.