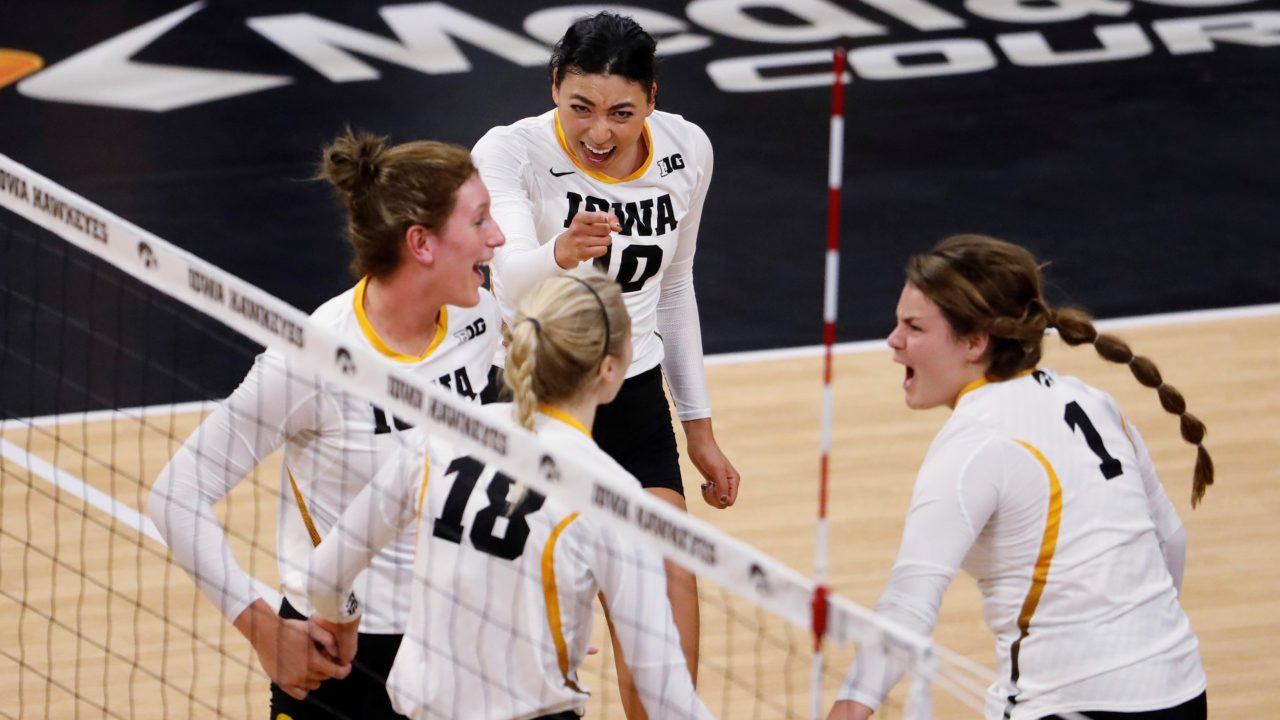 EVANSTON, Ill. — The University of Iowa volleyball team used a .413 attack percentage and 49 kills to down Northwestern in straight sets Saturday in Welsh-Ryan Arena. The Hawkeyes improve to 12-4 (2-2 B1G) on the season, marking the team’s best start to a season since 1994.

“Our whole group did a great job tonight,” said UI head coach Bond Shymansky. “Our passing really anchored us and allowed Loxley (Keala) to run our offense. You could see that with the even distribution we got. We had so many kills from so many different places.

“I just loved the fight. You go up 2-0 into that locker room break, and it’s hard to sustain momentum. We just came out with fight and grit to finish it out.”

The Hawkeyes used a .355 attack percentage and 17 kills to overwhelm the Wildcats in set one. After a back-and-forth battle to start the set, Iowa went on a 5-0 run to take a 10-7 lead. Senior Lauren Brobst (2) and redshirt freshman Meghan Buzzerio (1) added kills to the rally, while junior Annika Olsen served an ace. Northwestern fought back, tying the set at 11, before the Hawkeyes regained the lead on a 4-1 run. Iowa controlled it from there, closing with a 5-0 rally behind three kills from Brobst to win the set, 25-18. Brobst paced the Iowa offense in the set, registering seven kills and a .417 attack percentage.

Iowa stayed hot in set two, capitalizing on four Northwestern errors to take an early 5-0 lead. The Wildcats came within four points four times, but the Hawkeyes remained in control to win the set, 25-16. Iowa hit .424 in the set, behind five kills from senior Ashley Mariani and Buzzerio.

After a back-and-forth battle to start the third game, the Hawkeyes utilized a 7-2 rally to take a 15-10 lead. Sophomore Reghan Coyle registered back-to-back solo blocks, while Mariani, Brobst, and freshman Cali Hoye each added kills. The Hawkeyes controlled it from there, going on to win 25-19. Iowa closed the set with a 7-3 run behind five kills from Brobst.

The Hawkeyes return to action next weekend, hosting Purdue (Oct. 7) and Indiana (Oct. 8) in Carver-Hawkeye Arena.

EVANSTON, Ill. – Northwestern junior Symone Abbottrecorded her 1,000th career kill on Saturday night at Welsh-Ryan Arena, becoming the 22nd player in Wildcats’ history to achieve the feat and the first since Katie Dutchman in 2014.

Iowa won the match, three sets to none.

“Iowa passed well, and their setter did a nice job of moving the ball around,” head coach Shane Davissaid. “She opened up some of their players that maybe don’t necessarily get a lot of kills.”

Junior setter Taylor Tashima added 25 assists and is now at 2,536 for her career, just one away from passing Madelyn Shalter for sixth place all-time in program history.

The Wildcats’ blocking gave Iowa early trouble, but the Hawkeyes pulled away with the first set 25-18. Iowa jumped out to an early lead in the next frame and won the second set 25-16. The ‘Cats responded well in the third set and were tied 9-9 before the Hawkeyes finished out the match by wining the third set 25-19.

Chicago’s Big Ten Team is right back at Welsh-Ryan Arena on Wednesday when in-state rival Illinois comes to town. First serve between the Wildcats and 24th-ranked Illini is set for 7 p.m.