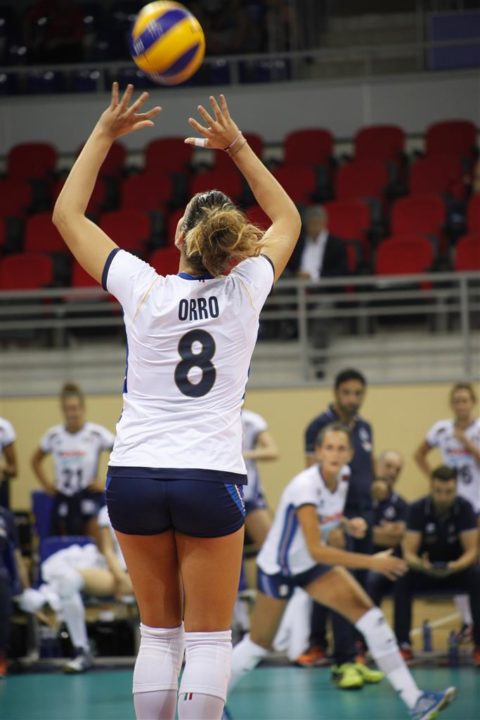 Orro joins the squad after spending time with Italy's National Team for CEV's European Championships. She will join Americans Sara Wilhite and Michelle Bartsch for UYBA's first friendlies of the season. Current Photo via CEV

Currently enjoying a nice team retreat in the Chiavenna mountains, UYBA (Busto Arsizio) now boasts its full roster, with the return of Alessia Orro from national team duties, according to LegaVolleyFemminile. The youngster assumed starting duties in Italy’s CEV’s European Championships after Ofelia Malinov suffered an ankle fracture. She finished the tournament as its 7th best ranked setter, with a 35,29% setting efficiency. Italy’s run was very disappointing though, as it cruised in the group stage, but lost to the Netherlands in the quarterfinals.

Orro is one of Busto Arsizio’s most important transfers of the season, joining the team after having played the last four seasons for Club Italia (some of which in Italy’s lower divisions). Orro is one of Italy many young gems, at only 19 years of age, and already with an Olympics participation under her belt. She also won a gold medal in 2015 FIVB Girls’ U18 Championships.

Now, on October 7 and 8, UYBA will face its first test of the season, the “Primo Memorial Giampaolo Ferraria” tournament, a four team friendly that will also have Igor Volley, Imoco Conegliano, and Sab Volley Legnano as participants. All games will be live streamed on UYBA’s official Facebook page. Part of the proceedings from the friendly matches will be donated to a pediatric charity. Orro will be joined in UYBA’s squad by Americans Sara Wilhite and Michelle Bartsch.