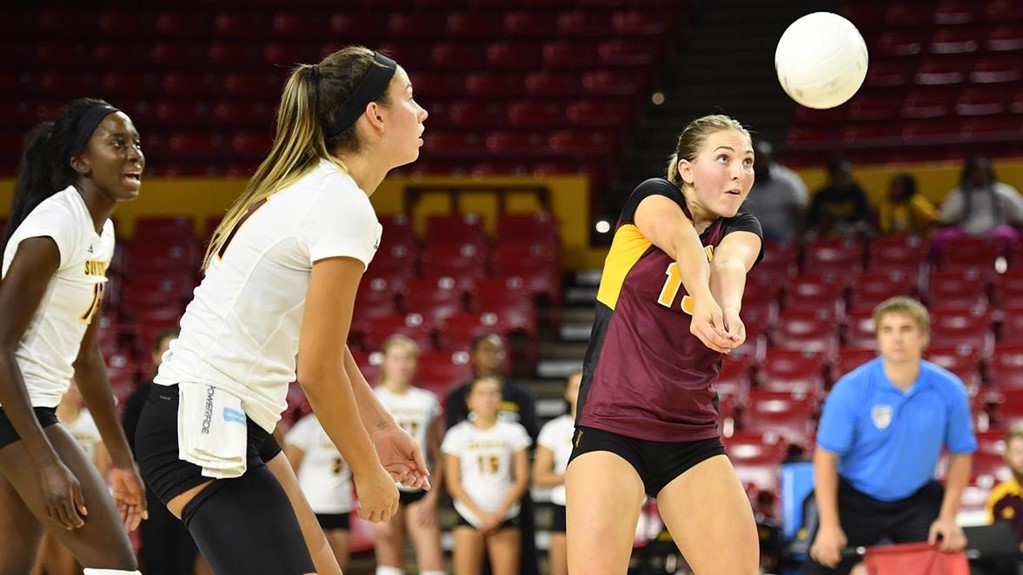 Arizona State volleyball’s senior libero Halle Harker only needed 13 digs to make career history, but gave the program 31 in her final effort as a Sun Devil. Harker and the Devils battled rival Arizona to a four-set match, but ultimately fell, 17-25, 17-25, 25-23, 17-25 on Saturday at the McKale Center.

Harker’s 31 digs mark one of the best efforts of her career, which dates back to the 2013 season, when she set the freshman record for digs in a single match on back-to-back nights with 33 and 34, respectively. The Bakersfield, Calif., native finished her career in the Maroon and Gold with 2029 digs, placing her at No. 2 all time in ASU history. During the match’s second set, Harker passed standout Stephanie Preach’s mark of 2010, which she set from 2010-2013. Harker also finished in the upper echelon of the Pac-12 conference’s liberos, with her 2029 placing her in a tie for No. 10 all-time in league history with Oregon State’s Becky Defoe (2010-13).

“When I think about Halle Harker, I think about the kind of player she is and the kind of person she is,” Sun Devil interim head coach Carlos Moreno noted. “She did phenomenal things during her career, and it’s our job to keep her legacy alive, not only through her leadership, but her work ethic and efforts. Just an amazing leader and example for all of us.”

For single-season numbers, Harker finished with 609 in 2017, making her the first Sun Devil since the 2012 season to surpass 600 digs in one campaign. She finished in 6th all-time at ASU’s, surpassing Mindy Gowell’s 601 from 1990.

Offensviely for the Sun Devils versus the Wildcats, freshman Griere Hughes led the way with 14 kills, while sophomore Ivana Jeremicadded 12 and senior Oluoma Okaro notched 10. Okaro’s 489 kills on the season, mark the 10th most in a single season in program history.

Entering in the second frame, freshman setter Shelbie Dobmier posted a double-double with 26 assists and 10 digs.

“When I think about this group, I think about resilience,” said Moreno. “It’s not easy to have the kind of record we have and still come in and show up every day and give their best. It takes a special group to do that, and I don’t think just anybody can do it. It takes a special group to learn through failure and get back up every day, get back in the gym and work hard and support each other. Its not about the outcome, it’s about the journey, and I think they are ready to face any challenge. At end of the day, it’s more than just volleyball, and as a coach, it’s our job to teach life lessons through volleyball. Not only are these ladies better volleyball players, but better people because of it. I know they’re going to do great things because of way they face adversity. We are excited for next year, and I have high expectations for this group.”