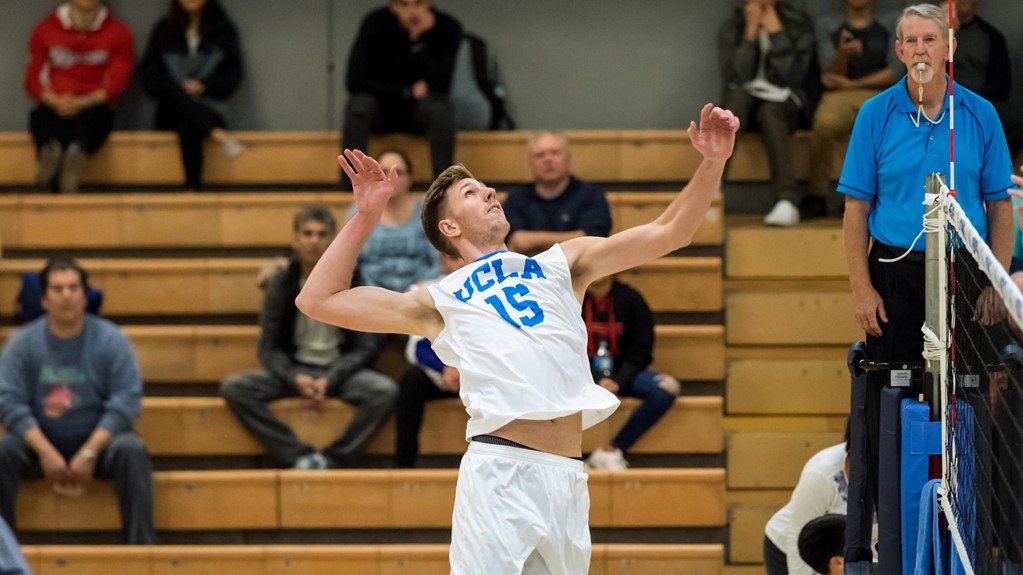 Jake Arnitz had double-digit kills for the fourth time in his last five matches as UCLA's serving took over in a sweep of Concordia Irvine. Archive Photo via UCLA Athletics

Los Angeles, California – #4 UCLA utilized a powerful attack and strong serve to keep #14 Concordia Irvine on their heels throughout in a three-set sweep. The win keeps UCLA within a few matches of BYU at the top, while it continues the trend of boom or bust versus ranked opponents for the Eagles.

The balance was very much of note to see for the Bruins, who got a rare low-kill and efficiency (for his standards) performance from Daenan Gyimah (three kills, .250) yet still had plenty of success. It also continues a positive string of play for Arnitz, who has now recorded double-digit kills in four of his last five matches after a streak of 11 consecutive matches without hitting that mark.

For Concordia Irvine, no player reached double-figures kills as Raymond Barsemian (eight kills, .227) had the most with Jacob Weiser (10 digs, two assists) leading the defense.  Speaking of the defensive end, UCLA’s main success coming on that end was due to their electric serve, as they kept the Eagles out of sorts and out of system as points throughout. In total, they notched nine aces compared to just one for Concordia Irvine.

UCLA’s schedule continues this week at home against #11 Grand Canyon while Concordia Irvine has six more straight on the road, with #8 Pepperdine on the ledger next.

The No. 4-ranked UCLA men’s volleyball team registered a straight set win over No. 14 Concordia in a Mountain Pacific Sports Federation match played on Wednesday night in the John Wooden Center. Scores of the contest were 25-22, 25-15, 25-19. The Bruins improved their records to 18-5 overall and 6-2 in MPSF action while upping their home record to 12-1 with the victory. Christian Hessenauer led the way with a match-high 18 kills as UCLA outhit the Eagles .396 to .227.

Set one was a battle with neither team leading by more than two until the end. Concordia established the early edge at 4-6. UCLA came back to level the score at points 6 and 7 on kills by Dylan Missry. A spike by Jake Arnitz put UCLA in front 10-8. The visitors then grabbed leads of 12-14, 13-15 and 15-17. The Bruins battled to even the score at 17 after an ace from Missry. Another ace from Missry sent UCLA in front 18-17. A Hessenauer swing pushed the Bruins into a 22-21 advantage. Ian Parish connected for a 23-21 lead. Two straight kills from Hessenauer, who finished with seven in the set, ended the frame at 25-22.

In set two, UCLA ran out to a 10-4 margin after an ace from Arnitz. Concordia rallied to close to 11-9, but the Bruins opened the lead up after kills from Daenan Gyimah and Missry to make it 13-9.The Eagles sliced the deficit to two points again at 14-12 only to see UCLA answer with kills from Gyimah and Parish. Eric Matheis came on with UCLA up 20-15 and served out the set, recording a couple of aces along the way in a 25-15 win. UCLA hit .469, with just one error in 32 swings during the set.

UCLA broke a 5-all tie with a four-point run in set three thanks to kills from Arnitz and Hessenauer and a pair of aces from Micah Ma’a. The Bruins built the lead up to 16-10 after another Missry kill. Hessenauer’s sixth kill of the set made it 18-13. Sam Kobrine delivered point 24 with a smash and the Bruins took home the match, 25-19, after an Eagle serving error. UCLA hit .500 for the set.

UCLA, which will host No. 13 Grand Canyon on Friday night at 7 p.m. in the Wooden Center, recorded nine service aces to one for Concordia. The Eagles won the block battle 4.5 to 2.0 over the Bruins.

LOS ANGELES, Calif – Almost a year to the day, Concordia went on the road to face their future conference opponent UCLA, taking the nationally ranked Bruins to five sets. On Wednesday night, No. 14 Concordia (10-11, 3-4 MPSF) looked to upset and avenge No. 4 UCLA (17-4, 6-2 MPSF) after falling to them in three in the MPSF season opener in January, but the Eagles could not come through as they lost 25-22, 25-15, 25-19.

Darcy Taig started well for the Eagles early, tooling the Bruins block and teaming up with Predney and Hunter Howell for a block and a 3-2 lead. Howell and Predney would then earn another block, followed by a UCLA swing into the net to go ahead 12-11. A Bruin service error gave Concordia the lead at 16-15, which would then increase with Falduti and Chandler Gibb collecting a block and forcing UCLA into a timeout. Howell sent back a third UCLA attack for the night with Taig to tie the set at 21-21, before the Bruins used a 4-1 run to finish the set.

A kill by Predney brought Concordia within one at 5-4 in the second set. The Bruins started to gain separation, taking five straight points until a Barsemian kill ended the run to make the score 10-6 UCLA. Kills by Howell and Gibb brought CUI within two and tough serving from Howell forced an overpass and a put away by Barsemian kept Concordia in the set. Back-to-back kills by Falduti and a UCLA service error closed the gap, but the Bruins went on a 7-0 run to close out the set and take the 2-0 lead in the match.

UCLA scored two points right out of the break with Predney responding with two kills of his own to tie the set. Tough serving for the Bruins gave them many opportunities to score, giving them an early 9-5 lead and forcing a Concordia timeout. Barsemian and Taig each collected kills to help CUI keep steady with UCLA at 13-9. Owen Chun checked in and put down a kill to stay within four before a 3-1 UCLA run spurred and was then ended by a kill on the left side by Isaiah Kaaa. Three of the next four points were service errors and UCLA put down a kill to earn match point. A kill from Kaaa off a swing out of the back row and a Bruin’s swing out of bounds fought off two match points before CUI had a service error to end the set and match.

Next Up: Concordia continues their road trip up the coast where they head to Malibu to take on No. 7 Pepperdine. Earlier in the season, the Waves defeated the Eagles in four sets in CU Arena.