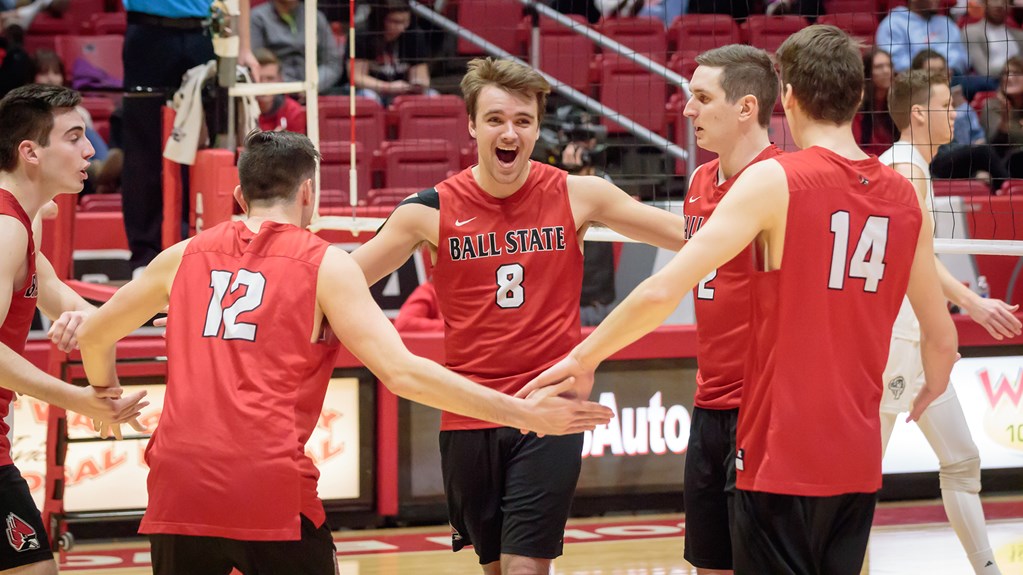 Stellar blocking efforts lifted Charleston (WV) and No. 12 Ball State to five-set road victories on Wednesday night. The Golden Eagles also chipped in an outstanding effort from the service line in their victory, while the Cardinals had help from near double-doubles by sophomore outside Matt Szews and senior middle Matt Walsh in their win.

Key Stats: In a match that was fairly even offensively, Charleston used 12 aces and 12 blocks to edge past Belmont Abbey on Wednesday night. Both teams posted 56 kills and the Golden Eagles owned a slight .223 to .221 advantage in hitting efficiency en route to their third straight win. Charleston outdid the Crusaders 12-5 in aces and 12-9.5 in blocks to secure the victory. After struggling offensively in Sets 1 and 3 to the tune of .000 and .074 efforts,  the Eagles rebounded to hit .464 in Set 4 and outdo Belmont .263 to .200 in the final stanza.

Sophomore outside Liam Maxwell downed a career and match-high 28 kills, while hitting at a .367 clip and adding eight digs. Sophomore outside Pierce Pliapol (9), senior opposite Gavin Schaffer (8), freshman middles William Morris (6) and Brian Long (5) rounded out the offense, though none hit better than .200. Morris chipped in seven blocks, while Schaffer added five stuffs.

It Was Over When: Charleston trailed 4-2 in Set 4 after being stuffed twice, but responded with nine of the next 11 points to go up 11-6. Krumerac notched a kill and served up four straight aces in the run to give the Eagles a 7-4 edge and force a Belmont Abbey timeout. Three different players downed kills and Santos and Roberts teamed up for a block to continue the rally and make the Crusaders take another break down 11-6. Greenway and Krumerac made it 14-8, but a kill and a block kept Belmont Abbey in the game. Greenway issued the final blow of the 15-10 win.

Key Stats: Ball State snagged a road win over Fort Wayne in the first of two meetings this week, using a 14.5-6 lead in blocks to fuel the victory. The Cardinals overcame a .277-.263 deficit in hitting efficiency and 62-58 margin in kills by winning the block and taking a 8-7 lead in aces. The win snapped a two-match losing streak for BSU.

It Was Over When: The Cardinals seized the early advantage in Set 5, scoring four of the first five points, and never looked back. A kill and a block by Weiler led the early run, while Szews chipped in two kills to push the advantage to 6-2. The Mastodons would get no closer than three the rest of the way. Back to back putaways by Parker Swartz made it 9-4 BSU. Four different Fort Wayne players notched kills to pull the team within three at 12-9, but it was not enough. Kills by Szews and Walsh and a final stuff by Walsh, Jake Romano and Ben Chinnici sealed the 15-10 win.

Stat Leaders: Senior opposite Christian Hessenauer notched a match-high 18 kills and a team-best nine digs, while hitting at a .483 clip to pace the Bruins. Junior outside Dylan Missry and senior outside Jake Arnitz added 10 kills apiece. Arnitz put up the team’s lone solo block, while hitting at a .381 clip. Missry and Hessenauer each served up two aces alongside junior setter Micah Ma’a and senior setter Eric Matheis.

It Was Over When: UCLA built an 11-6 lead in Set 3 and held on for the victory. Four Hessenauer kills and two Ma’a aces led to the early advantage. Two Missry kills pushed the edge to six at 15-9. Concordia Irvine scored three of the next four, two on Bruin errors, to cut the margin to four at 16-12, but would get no closer. Arnitz and Hessenauer notched two kills apiece down the stretch to give UCLA a match-point try at 24-17. An Isaiah Kaaa kill and a Bruin hitting error kept the set going. An Eagle service error marked the final point.