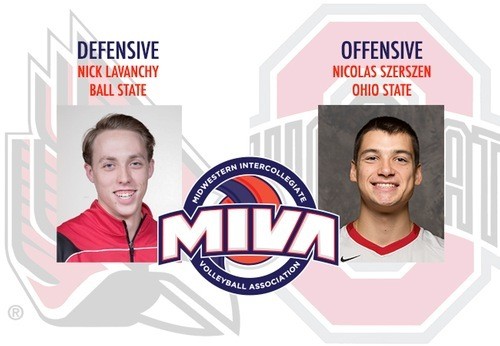 Szerszen is the MIVA Offensive Player of the Week after helping Ohio State to wins over USC and No. 2 UCLA last week. In the two matches he averaged 3.50 kills per set while hitting at a .340 clip. He also added two aces. In the contest against UCLA he finished with 17 kills on 26 swings for a .500 attack percentage as the Buckeyes won in four sets.

Lavanchy is the MIVA Defensive Player of the Week after the Cardinals traveled to Hawaii to open the season. The freshman libero averaged 2.33 digs per set as he was named to the Outrigger Resorts Invitational All-Tournament Team. Against Princeton in a 3-2 win he recorded 15 digs. In a 3-1 setback to host Hawaii he added 12 digs. In those two matches he finished with an average of 3.00 digs per set while adding one dig in a sweep of Erskine.