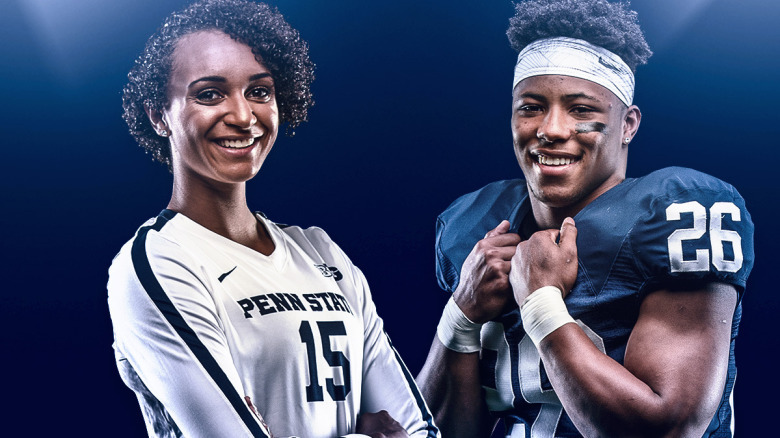 UNIVERSITY PARK, Pa. — Penn State Athletics has announced its Male and Female Student-Athletes of the Year, with football’s Saquon Barkley, the 2018 NFL No. 2 overall draft pick, and women’s volleyball’s Haleigh Washington, a three-time CoSIDA Academic All-American, earning the honors for the highly-successful 2017-18 academic year. Both earned first-team All-America honors this past year.

Barkley, a junior, and Washington, a senior, will be on the ballot for Big Ten Male and Female Athletes of the Year with honorees from the other 13 conference institutions.

The honors are the latest in a long list of accolades for the two standout student-athletes.

The native of Coplay, Pennsylvania was the 2017 Paul Hornung Award winner for the most versatile player in major college football, and finished fourth in the 2017 Heisman Trophy voting. He was also a finalist for the Maxwell Award, Doak Walker Award, Lombardi Award and Walter Camp Player of the Year Award.

At the conference level, Barkley took home numerous honors, including the Graham-George Big Ten Offensive Player of the Year honor, Ameche-Dayne Big Ten Running Back of the Year award and the Rodgers-Dwight Big Ten Return Specialist of the Year. He also earned his second-straight Chicago Tribune Silver Football for the Big Ten’s top player. In addition, Barkley was named the AP Big Ten Offensive Player of the Year and was first-team All-Conference as running back and return specialist by both the coaches and the media.

In 2017, Barkley broke the program record for receptions by a running back with 54 catches, which also ranked tied for No. 12 in single season history. He also eclipsed the single-season record for receiving yards by a running back (632; 2017), topping his own record of 402 yards set in 2016. Barkley scored 138 points in 2017, which is tied for No. 3 on the single-season scoring list. He ranked No. 2 at season’s end on the single season all-purpose yards list with 2,329 yards, and became just the second player in program history to eclipse the 2,000 all-purpose yard mark (Larry Johnson, 2,655; 2002) in a season.

In his three-year career, Barkley finished as Penn State’s all-time rushing touchdown (43) and total touchdown (53) record holder, surpassing Lydell Mitchell’s marks of 38 rushing and 41 total touchdowns, respectively, from 1969-71. He also capped his career as Penn State’s career all-purpose yards leader (5,538). He is the only player in Penn State history and just the fourth in Big Ten student-athlete to gain 3,000 rushing and 1,000 receiving yards in a career.

This honor is the latest for Washington, who most recently was named as Penn State’s recipients for the prestigious Big Ten Medal of Honor for 2017-18 and a 2017-18 recipient of the Ernest B. McCoy Award. In addition, Washington was the 2017 Senior CLASS Award® winner for NCAA® Division I women’s volleyball and a nominee for the Class of 2018 Honda Sport Award for Volleyball.

Washington, a captain of the 2017 Big Ten Champion and NCAA semifinalist women’s volleyball team, graduated last December with a 3.79 GPA in philosophy. A three-time first-team AVCA All-American, she earned Big Ten Defensive Player of the Year honors in 2017 and was a four-time All-Big Ten honoree.

Washington helped Penn State to a 33-2 record and an NCAA Championship semifinal appearance in her senior campaign. Over her four-year career, she helped the Nittany Lions to a 121-21 record and the 2014 NCAA Championship. Washington was a three-time CoSIDA Academic All-American, earning second team honors in 2015 and 2017, and third team honors in 2016. She also earned Academic All-Big Ten honors in her sophomore, junior and senior seasons.

Since her graduation last December, Washington has pursued her dream of playing professional volleyball, recently completing her first season as a starting middle for Olimpia Teodora Ravenna in the A2 Italian Women’s Volleyball Championship League.

A school record 520 Nittany Lion student-athletes earned at least a 3.0 grade-point average during the 2017 fall semester. Penn State ranks No. 4 among all Division I schools with 201 CoSIDA Academic All-Americans all-time, including Washington, Emily Ogle (women’s soccer), and Noah Roberson (men’s gymnastics/At-Large) this year.

Penn State’s 50 NCAA Championships all-time (78 national championships overall) rank No. 5 among all NCAA Division I programs and are the highest total of any college or university east of the Mississippi River. Penn State’s 31 NCAA titles since 1992-93, including a third consecutive NCAA Wrestling Championship, lead all Big Ten Conference institutions. The Nittany Lions have won 107 Big Ten championships or tournament titles since capturing their first crown in 1992-93, including conference titles in women’s soccer, women’s volleyball and wrestling in 2017-18.