Baylor Rolls Through No. 20 TCU In Straight Sets 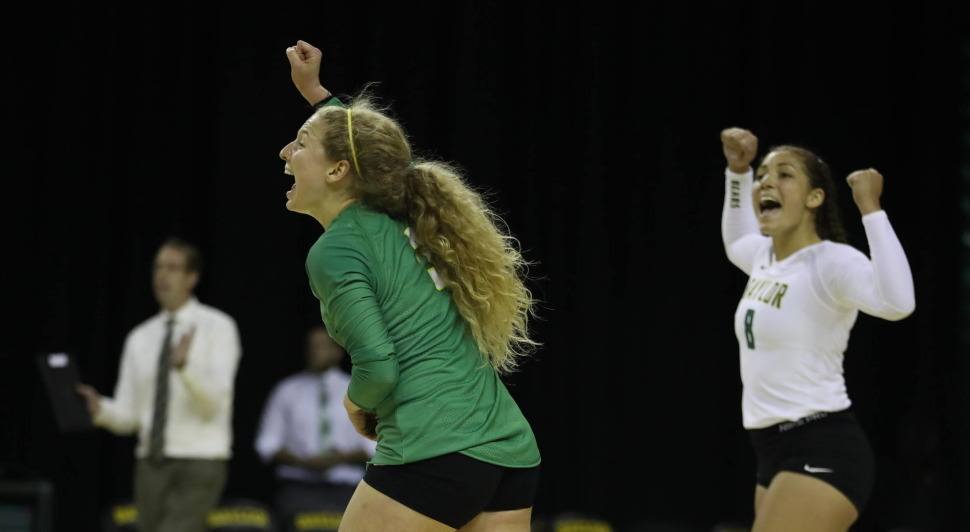 To lead the Horned Frogs, Natalie Gower had 11 kills, hitting for .500. Regan McGuire put down four blocks, but were out-blocked 8-6.

Following Saturday’s four-set loss at No. 8 Kansas, Baylor volleyball players and coaches emphasized that they would not be discouraged from the loss; but rather, take the experience as a confidence builder.

Against TCU that confidence showed.

The Bears (15-5, 3-1 in Big 12) swept TCU in straight sets, 25-19, 25-20, 25-19. Throughout the match, Baylor’s dominance shined through in all areas of play. Whether it was controlling the net, moving the ball around on offense or burying it into the Horned Frogs’ court, Baylor held their composure like an undefeated team rather than one coming off a disappointing loss.

“I think we all knew how big this win would be,” freshman Nicole Thomas said. “We’re in pursuit of a Big 12 championship, so we need to win all our games at home.”

Baylor is on a good pace to reach that goal, having won all three of its conference matches at home. Despite injuries and lack of size, this team finds ways to win nearly every time they step on the court. The Bears out-hit TCU .286-.026 in the first set, thanks to Katie Staiger’s .455 and Aniah Philo’s spectacular .625 hitting percentage. Thomas, filling in for the injured Jaelyn Jackson, took care of her duties at the net as if she’s been starting all year, assisting on our of the Bears’ six blocks in the first set.

Thomas certainly was relentless tonight, along with fellow middle Ashley Fritcher. The two were able to control the net throughout the night, despite TCU’s blockers having a significant size advantage.

“Jaelyn (Jackson) was our leading blocker. When you lose her, you wonder what kind of production you’re going to get,” second-year head coach Ryan McGuyre said. “But Nicole is one of those special athletes that, as a freshmen, makes good things happen. She’s really intuitive. We can tell her something once, and it resonates with her in a way that we get results that to me are very impressive. Her learning curve is quick and it has to be because we’ve thrown her into the fire.”

Most of the Bears’ success came from methodical, beautiful sets placed by senior Morgan Reed. Reed alone had 30 assists by the end of the night, while TCU’s entire team had 31.

“I thought Morgan did a phenomenal job getting great rotation on the sets today,” said coach McGuyre. “There has been times where Katie has taken bad sets and gotten kills, but I really think a testament to Katie’s offense tonight was how good Morgan was.”

Finishing the night with 45 kills and 56 digs, the Bears have yet to have a match where they haven’t shown improvement, though they will need to elevate their game next week as they play No. 4 Texas (12-2) at 7 p.m. Wednesday at the Ferrell Center.

Don’t call it an upset, though, if the Bears come away with a win against the Longhorns. This team has been fighting and grinding out tough victories all year, including wins over three RPI top-20 teams – No. 9 Washington State, No. 16 Kansas State and No. 20 TCU.

“There is something beautiful about this team,” McGuyre is quick to remind everyone. “We believe we are created for one purpose, and that’s to reflect God’s glory back to him. So to have an opportunity to express our thanks to God and how he’s seen us through this adversity… we’re fortunate to have had that opportunity tonight.”

The three-set sweep was also the first over the Frogs since Nov. 14, 2012 and first win over TCU for head coach Ryan McGuyre in his second season.

In the opening frame, the Bears jumped out to an 11-8 lead after junior Camryn Freiberg and sophomore Ashley Fritcher combined for one of five BU blocks in the first set. BU limited TCU to a .086 attack effort for the 25-19 victory.

The Bears and Horned Frogs traded points to open the second set, then BU rolled out a 13-9 lead to force a TCU timeout. Redshirt junior Katie Staiger added 10 kills to help Baylor earn the 25-20 second-set win.

HIGHLIGHTS
• BU earned its third win over a top-20 RPI team in the last four weeks (Washington State, Kansas State, TCU).
• The sweep was the first BU win over TCU for head coach Ryan McGuyre. The 3-0 win was also the first sweep over TCU since Nov. 14, 2012.
• Katie Staiger tallied at least 23 kills in a three-set match for the second time this season.
• Staiger and Aniah Philo finished with double-doubles against the Horned Frogs, their ninth and fourth of the season, respectively.
• Baylor limited the Horned Frogs to a .108 attack percentage, the lowest for the TCU squad this season.

QUOTE OF THE MATCH
“TCU is a very, very good team and they’re well-coached. They’re not a team that’s going to just roll over. Deep down you always want to just win all the matches, however the wins come. Our focus is just that we’re going to play hard and let the outcomes take care of themselves. Washington State was a grind and we know every set we play is going to be a grind, win or lose. We just want to make sure we’re grinding it out every time. Fortunate and glad we got it done in three.” –Baylor head coach Ryan McGuyre

Natalie Gower was the offensive leader in the match, as she led the team with 11 kills and no errors on 22 swings for a .500 hitting clip. Three Frogs finished with double-digit digs with Kayla Scheevel leading the team for the third straight match with 13 against Baylor.

Stat of the Match
.500 – Natalie Gower’s hitting percentage in the match which was the best on both teams. Gower has hit above .300 in nine matches this season and 39 matches in her career.

Quotes of the Match
TCU Director of Volleyball Jill Kramer
Opening Statement
“We started out and the first 10 points of the first set were back and forth and then we just let them run away with it a little early and got back on our heels. It felt like we were playing catch up the rest of the match. We really need to shore up some things both offensively and defensively. We didn’t do a great job of using our full tool box as hitters. We didn’t mix up our shots very well and things like that. We just kept swinging and that doesn’t work for us. We have to be a little bit smarter as attackers. I thought Baylor served really well and it was really hard for us to get our offense going. They had a great environment here tonight and we didn’t communicate very well. We fought at the end but too little too late. We have to be a lot better and not wait until our backs are against the wall to start playing. That is what I saw today. The way Baylor is playing right now is just too tough.”

Up Next
TCU will continue action on the road by traveling to Manhattan, Kan., to face Kansas State on Saturday, Oct. 8 at 1 p.m., in Ahern Field House.