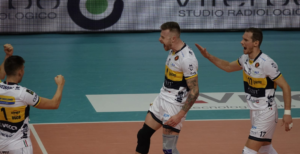 Zaytsev is a spiker and a member of the Italian national volleyball team. He has a Russian origin but he has represented Italy his whole life. He wears a number nine on his jersey.

Zaytsev started his international volleyball career as a setter but his position was moved later on after realising his talent as a spiker. His club career started in 2004 with Umbria Perugia when he was only 16 years old. Since then, he has represented multiple club teams his latest being Sir Safety Perugia in Italy. Perugia won their first Italian Cup in 2018 after beating Lube Civitanova 3-1.

Zaytsev has been a member of the national team since 2008. With Team Italy, Zaitsev has won two European Championship silver medals. During the 2013 European Championships, Zaitsev was named as the Best Server. He has also competed in several Olympic Games and in 2012, Italy placed third after beating Bulgaria 1-3 in the Bronze medal match. Four years later, that bronze turned into a silver medal when Italy lost the Gold medal match to Brazil 0-3.