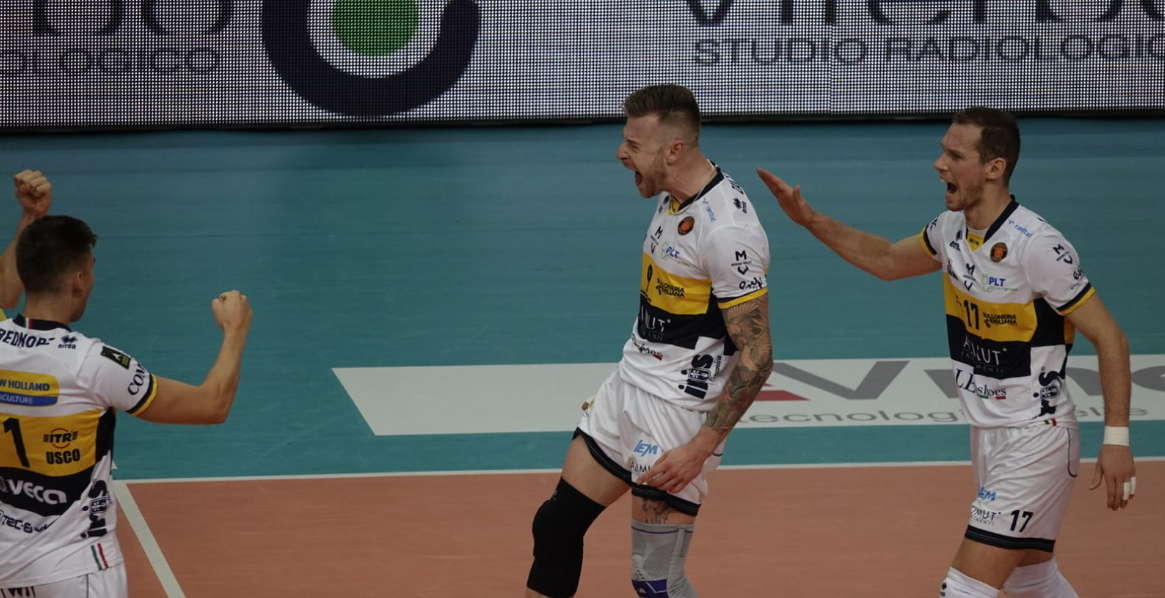 Ivan Zaytsev carried Modena through 5 sets to get the win.  Current Photo via Modena Volley

Modena was the first of the top 4 teams in Italy to slip up in the SuperLega, though they still prevailed with a victory. Though they dropped a point to BCC Castellana Grotte when they failed to complete a comeback in the 4th set. They were down 13-6 and pulled back to withing 2 points at 16-14 behind a Marco Pierotti’s run of 5 serves (including an ace).

After Max Holt’s 2-point performance last week in which he hit .000 (33%), he was not in the starting lineup for Modena. Though he entered the match in the 4th set and started the tie-break, replacing Daniele Mazzone (who scored 3 points). Holt finished with 3 kills and tied a team-high 3 blocks while hitting .500 (75%).

Micah Christenson matched Holt with 3 blocks for Modena. The American setter also contributed a kill and 3 aces from the service line. His team took a dip in attack efficiency from last week, only setting them to .254 (45%) hitting percentage.

Ivan Zaytsev was the hot hand for Modena as they battled through a tie-break to get the victory. The Italian who came to Modena from Perugia in order to start at opposite led all players with 30 points. He put up 1 block at the net and hit 24 kills. His kills came with a .541 (65%) hitting percentage over 5 sets. He was also lethal from the service line, getting aces and apllying pressure to Castellana Grotte’s passers in servie receive. He served a match-high 24 balls and earned 5 aces. He was the obvous choice for the MVP of the match.

Aidan Zingel was the most impressive player for Castellana Grotte. The middle blocker scored 14 points on 8 kills and a match-high 6 blocks. He also hit .700 (80%) and his only blemish in attack was getting blocked once. Motjaba Mirzajanpour scored 16 points on 13 kills and 3 aces. Renan Buiatti chipped in 17 points as the opposite on 15 kills and 2 blocks, but he also committed 11 errors in attack. He finished with a .100 (38%) attack average.