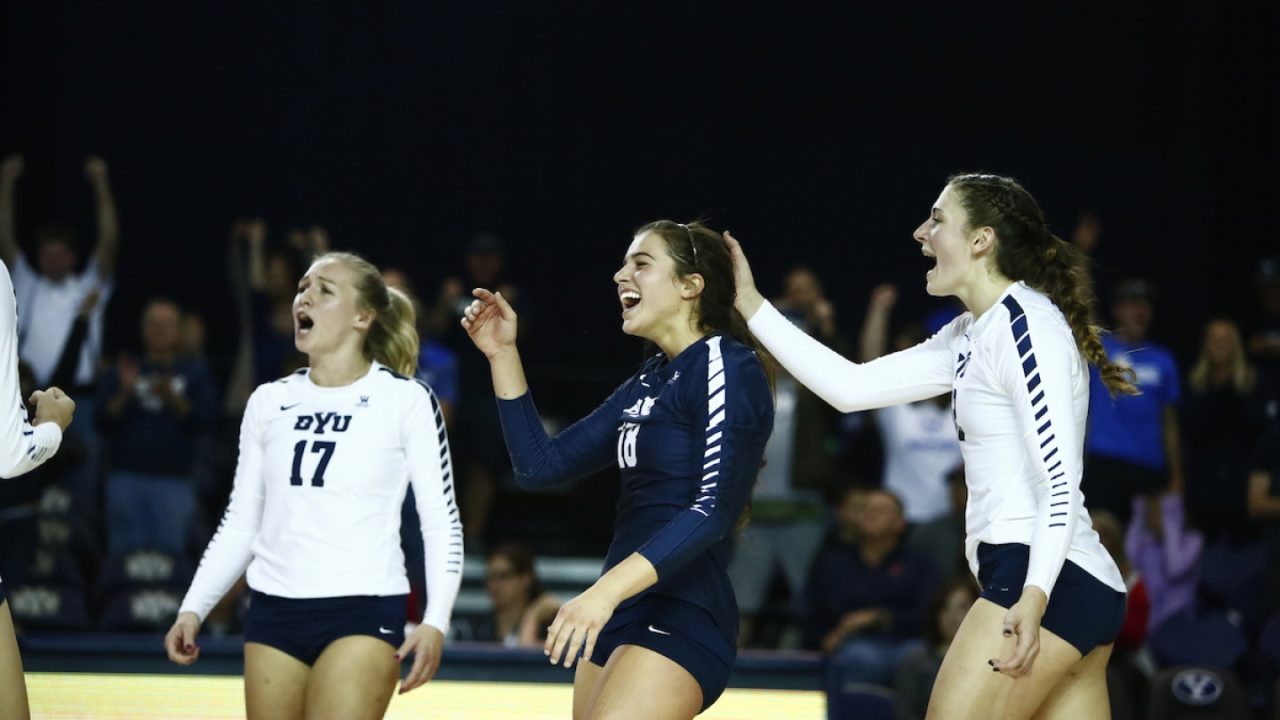 A strong performance from Veronica Jones-Perry gave BYU a convincing three-set win over Arizona State on the road.  Current Photo via BYU Photo

A strong performance from Veronica Jones-Perry gave BYU a convincing three-set win over Arizona State on the road.

Overall, BYU had a great offensive night, with 43 total kills and five aces on the night while hitting for .317. Defensively, they were able to hold the Zags to a low .124 hitting clip behind five total team blocks that included 10 block assists. Mary Lake also helped with this effort as they picked up 16 digs on the night while Lyndie Haddock dished out 33 assists and nine digs.

Jones-Perry posted 16 kills in the match on a .260 hitting performance while Cosy Burnett added another seven kills and three blocks.

For Gonzaga, Chapin Gray recorded nine kills while setter Faith Smith dished out 13 assists and 11 digs for a double-double. Tiyana Hallums picked up another 12 digs in the loss.

“Offensively, we had a great match tonight,” BYU head coach Heather Olmstead said. “Lyndie (Haddock) did a good job of distributing the offense and we took smart swings. We served tough and played scrappy defense behind the block. We’re looking forward to using this match to keep getting better.”

Veronica Jones-Perry led the Cougars with 16 kills to go with seven digs and three aces. Lyndie Haddock set the team with 33 assists to go along with nine digs while Mary Lake collected 16 digs. Cosy Burnett helped out in the defensive effort with a team-high three blocks, and Lacy Haddock contributed seven kills on a .467 clip and five digs in the win.

An ace from Lake put BYU ahead of Gonzaga 4-2 early in the first set. A pair of kills from Jones-Perry helped the Cougars on an 8-1 run to extend the lead to seven, 10-3, forcing a Bulldog timeout. BYU maintained its lead at 16-7 following consecutive McKenna Miller kills. A Jones-Perry ace pushed the Cougars ahead by double digits, 22-12, and another Miller kill ended the set 25-15.

Gonzaga went up 3-0 to begin the second set after a pair of BYU attack errors. The Cougars countered with an impressive 12-0 rally, which included three more kills from Jones-Perry and three from Lacy Haddock, to take a 12-3 advantage. Two errors from the Bulldogs pushed BYU ahead by 12, 20-8, before another Gonzaga error gave the Cougars the set 25-13.

The Bulldogs took a 6-3 advantage to start the third set. Gonzaga maintained its lead until an overpass kill from Lacy Haddockevened the score at 8-all. A Burnett and Lyndie Haddock block knotted up the score at 13 apiece before a Lacy Haddock and Kennedy Redding block put BYU ahead with a 17-16 edge. A 5-1 Cougar run helped extend the lead to four, 22-18, and a Miller kill ended the set and match 25-21.

The Cougars stay on the road for their final regular-season match away from home, facing Portland on Saturday, Nov. 11, at 1 p.m. PST at the Chiles Center. The match will be streamed live on TheW.tv. Links to the video stream and live stats can be found on the BYU women’s volleyball schedule page.

The Gonzaga University volleyball team hosted ninth-ranked BYU Saturday, falling to the Cougars in three sets (25-15, 25-13, 25-21) at the Martin Centre.

The third set was the closest of the match, seeing 10 tie scores and a pair of lead changes. Neither team took control of the set early as there was just one three-point lead through the first 38 points. Gonzaga earned a 68 percent sideout mark during the set, and they also added a match-high 18 digs. Five of freshman Chapin Gray‘s nine kills came in the third set, but it wasn’t enough as BYU closed out the match 25-21.

GU kept pace with the Cougars defensively, matching BYU at 42 digs. The Bulldogs entered Thursday fourth in the West Coast Conference in total digs and fifth in digs per set. BYU narrowly won the blocking contest 5.0 to 3.0; Mack was involved in two of Gonzaga’s three blocks, stopping one by herself in the first set.