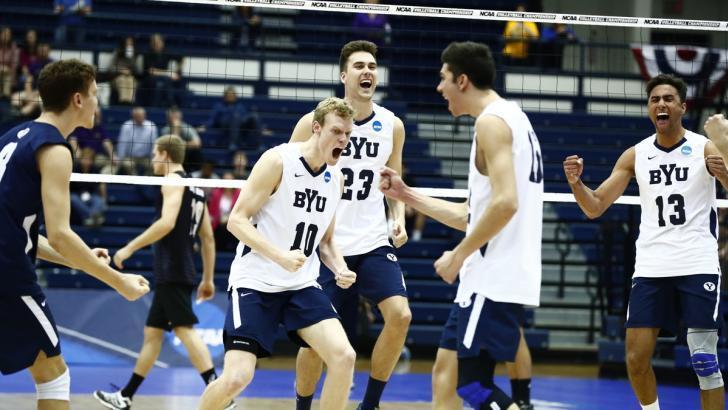 BYU started a busy weekend at the Smith Fieldhouse with a 3-0 win over McKendree. The two teams will play again on Saturday. Archive Photo via BYU Photo/Jaren Wilkey

The 4th-ranked BYU Cougars opened their home schedule on Thursday with a 3-0 thumping of the McKendree Bearcats. Home holds a special significance for BYU, who routinely lead the nation in home attendance, though they drew just 1,830, well below normal, for their opener on Thursday.

“It’s nice to be back in the Smith Fieldhouse and the guys were excited about that,” BYU head coach Shawn Olmstead said. “I liked how they played from the start. They were assertive and aggressive, and I was happy with how they played.”

Both teams have played loaded schedules so far – this was BYU’s first game against a non-top-15 team (they beat #6 Lewis and lost to #11 Loyola last week in Chicago). Both teams played relatively clean games, including a team .397 hitting percentage for the Cougars.

The home team was led by 9 kills each from Jake Lanlois and Ben Patch in the game, though Patch had the better average (.667-.222).

BYU dominated at the net with a season-high 9 team blocks to just 4 for McKendree, and BYU also had their best game of the season serving with just 11 service errors.

McKendree’s top hitter was senior Maalik Walker, who had 9 kills but needed 23 swings to do so (with 5 errors).

McKendree’s tough early-season tests paid off on Friday, where they beat Concordia University 3-2 for their first win of the season. The team hit much better in that game, swinging .363 as a team – including 24 kills from Walker and 22 from Nolan Rueter – whose previous career best was just 14.

BYU plays Concordia later on Friday evening and will then have a rematch with McKendree on Saturday.