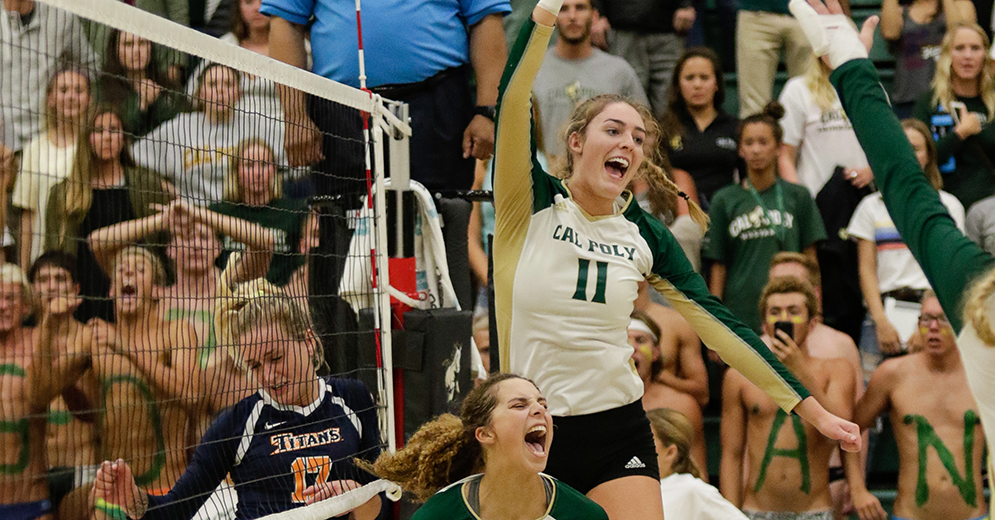 The Mustangs hit .317 on the night with 57 kills with help from senior setter, Taylor Nelson, with 46 assists. Riverside pounded 47 kills on a .136 clip at the aid of setter, Morgan Kline, with a career-high 32 assists. Cal Poly out-blocked the Highlanders 9-4.

Torrey Van Winden paced the Mustangs with 21 kills on a .474 clip and 14 digs for a double-double, while her sister, Adlee Van Winden, added 12 kills on a .297 clip. Mickayla Sherman led the offense for Riverside with 13 kills, hitting .132. Brooke Callahan also posted double-figure kills with 12 on a .333 clip.

Defensively, Cal Poly out-dug Riverside 65-63. Katherine Brouker, junior libero for the Mustangs, led Cal Poly in digs, with 19. Leading the back row for the Highlanders with 20 digs was libero, Nicole Rodriguez.

Both teams will continue with Big West play Saturday night as Cal Poly travels to Cal State Fullerton and the Highlanders host UCSB.

Cal Poly got out to another quick start to begin the third set, going up 9-3 at one point. The Highlanders would rally to get it back to 10-7. Down 16-11, UC Riverside went on a 7-3 run to cut the lead to 19-18. The Mustangs would score the next three points followed by two straight by UC Riverside. Up 24-21, an Adlee Van Winden service ace finished off the set for Cal Poly, 25-21.

The beginning of the fourth set saw the two teams trade points to start. Tied at 8, the Mustangs scored 12 straight points to go up 20-8 and would not look back from there. The Highlanders would make a late run but Cal Poly would go on to win the set 25-17 for its program record 20th straight win.

“I liked our response after the first set,” head coach Sam Crosson said. “Thought we settled down nicely and applied pressure from the service line and executed really well defensively.”

“It’s an awesome accomplishment for us as a team,” Crosson said of winning the conference title outright. “To continue the winning streak and to continue the offensive production we’ve been showing the last couple matches.”

Riverside, CA—The UC Riverside Volleyball Team (9-17, 1-13) battled #22 Cal Poly (25-2, 15-0) Friday, but fell in four sets. The Highlanders dominated the first set, but were not able take the match from the undefeated Mustangs.

SET ONE (25-19, UCR)
Key Runs: The Highlanders scored six of the first seven points and led by as much as seven by 17-10. The Mustangs closed the deficit to one point at 20-19, but the Highlanders won the next five straight points to take the set.

SET THREE (25-21, CP)
Key Runs: The Mustangs scored eight of the first ten points. The Highlanders battled to close the gap to one point, down 19-18, but were never able to take the lead.

Mickayla Sherman led the Highlanders with 13 kills, followed by Brooke Callahan with 12.

Nicole Rodriguez led the Highlanders with 20 digs. Rodriguez has now logged double-digit digs in 22 of the season’s 26 matches.

The last time the Highlanders won a set against Cal Poly was October 30, 2014 (Recap). The undefeated Big West Conference leader Cal Poly has only dropped seven sets to other conference teams this season.