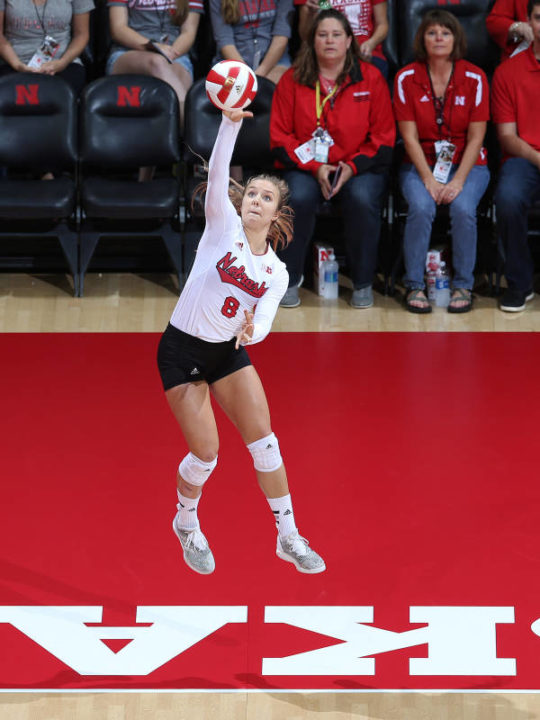 Smith recorded an assist in the sweep over Iowa State. Archive Photo via Nebraska Athletics

LINCOLN, Nebraska–The #8 Nebraska Cornhuskers pulled off the win and sweep over the #24 Iowa State Cyclones in a non-conference match-up on Sunday afternoon in the Devaney Center. Nebraska great, Sarah Pavan, had her jersey retired before the match and was one of seven inducted into the Nebraska Hall of Fame on Friday. She is one of the most decorated student-athletes in NCAA history.

Lexi Sunis still rehabbing an injury, but another Nebraska face made her debut in the 2018 season. Brooke Smithwas cleared to play after a compliance issue and was welcomed by a very loud cheer from the crowd. Smith began her collegiate career at Nebraska and transferred to Kansas State, where she split time as a setter, for her junior season. She has returned back to Nebraska for her senior year.

The Huskers showed no signs of struggling in the match, with the first set being the closest at 25-22. The Cyclones were held in the teens at 18 and 16 points in sets two and three. Nebraska hit .257 in the match while holding their opponents to .137.

Jazz Sweet led Nebraska to the win with 11 kills on 22 swings with zero errors for a .500 hitting clip, while Mikaela Foecke added in another nine kills on 30 swings with four errors to end the night with a .167 hitting performance. Lauren Stivrins made her presence known with eight kills and two errors for a .462 clip along with two blocks while Capri Davis also took the court with eight kills.

Nicklin Hames produced 29 assists and 13 digs for a double-double while Kenzie Maloney picked up a match-high 14 digs.

For the Cyclones, Jess Schaben put away nine kills on a .167 clip and Josie Herbst added six more while Jenna Brandt dished out 18 assists and collected 7 digs.

The Huskers will host the Husker Invite on Friday and Saturday at the Devaney Center, facing Central Michigan, New Mexico, and Missouri State.

LINCOLN, Neb. – The No. 7 Nebraska volleyball team swept Iowa State, 25-22, 25-18, 25-16, in front of a crowd of 8,108 at the Bob Devaney Sports Center on Sunday afternoon. The Husker volleyball program also retired the jersey of Sarah Pavan, one of the most decorated student-athletes in NCAA history, after the match. A four-time AVCA All-American and a two-time Academic All-American of the Year, Pavan became the ninth Husker in school history to have her jersey retired.

Behind 11 kills on .500 hitting from Jazz Sweet, the Huskers improved their record to 6-1 with their sixth straight win. Mikaela Foecke had nine kills and seven digs, and Lauren Stivrins and Capri Davis each put down eight kills. Nebraska out-hit Iowa State, .257 to .137. The Huskers had 39 kills and held the Cyclones to 31.

Nicklin Hames had a double-double for the fourth straight match with 29 assists and 13 digs. Kenzie Maloney had a team-high 14 digs and a pair of aces. Callie Schwarzenbach tacked on three kills and three blocks, while senior setter Brooke Smith made her season debut after gaining clearance from the NCAA, recording one assist.

Jess Schaben had nine kills for Iowa State (6-4), which entered the week one spot outside the top 25 in the AVCA Coaches Poll.

Set 1: The Huskers trailed 11-10 before rattling off a 5-1 run to take a 15-12 lead. Davis had back-to-back kills to open up the three-point lead. After ISU got within one, the Cyclones served long and Stivrins aced them, followed by a Hames and Schwarzenbach block for a 20-16 lead. Iowa State got back within one at 22-21 before committing another service error. The Huskers won 25-22 when Stivrins smashed a shot to the center of the court.

Set 2: Iowa State again held an early lead, this time 10-9, when Nebraska unleashed a 7-0 run to seize momentum. Sweet and Davis had kills, and Foecke blasted a kill and an ace on consecutive plays before an ISU net violation made it 16-10. An ace by Maloney and kill by Sweet pushed the lead to seven, 19-12. The Cyclones ran off a 4-1 run with back-to-back aces to cut the lead to four at 22-18, but after a timeout the Huskers regrouped and finished off the 25-18 win by scoring the final three points.

Set 3: The Huskers went up 12-4 with Sweet terminating three times, and Foecke and Stivrins twice each. A 5-1 spurt made it 20-9 Huskers after a Maloney ace, and the Huskers cruised to the sweep, 25-16.

Up Next: Nebraska hosts the Husker Invite on Friday and Saturday at the Devaney Center. NU will play Central Michigan (Noon) and New Mexico (7:30 p.m.) on Friday, and Missouri State at 7 p.m. on Saturday.

Jess Schaben led the Cyclone attack with nine kills, while Josie Herbst had six. In the back row, Hali Hillegas had 12 digs.

First Set: Nebraska 25 Iowa State 22
A 4-0 run put Nebraska ahead 5-2, but the Cyclone blocked helped bring the visitors back into it, as Jess Schaben’s solo stuff put ISU ahead 9-8. The lead did not last long as a quick 3-0 run got NU back ahead. Schaben dumped one over to pull ISU within one at 17-16, and the Huskers fired wide at 22-21 but ISU could not take the final step to get back into it. Lauren Stivrins powered won a kill to give the Huskers the first set 25-22.

Second Set: Nebraska 25 Iowa State 18
ISU got the lead early in the first set, getting ahead by a pair at 7-5. The Huskers got ahead at 9-8 when Avery Rhodes hit it into the net, but the Cyclone block got ISU back ahead at 10-9 via Josie Herbst and Rhodes. The Cornhuskers responded with a 7-0 run to move ahead for good at 16-10. Iowa State was able to cut the NU advantage to four at 22-18 on back-to-back Grace Lazard aces, but were unable to get any closer. Nebraska, who hit .250 on the set, made it 2-0 when Schaben hit one into the net at 25-18.

Third Set: Nebraska 25 Iowa State 16
Nebraska led the whole way, using a 6-0 run to build up an eight-point lead at 12-4. While the Husker offense clicked to a .457 hitting percentage for the frame with no attack errors, while ISU was held without a block after posting 6.5 in the first two frames. The Cyclone offense had its bright spots, hitting .206 for the frame and getting strong contributions from Herbst and Candelaria Herrera off the bench. Nebraska closed out the match when Jazz Sweet got her 11th kill of the match.

Up Next
Iowa State returns to Hilton Coliseum next weekend for three matches. ISU begins the Cyclone Classic against Wyoming on Thursday at 6:30 p.m., followed by the Iowa Corn Cy-Hawk Series meeting against Iowa at 6:30 p.m. on Friday. Sunday will see ISU close out the tournament against Syracuse for a match at noon on ESPNU.