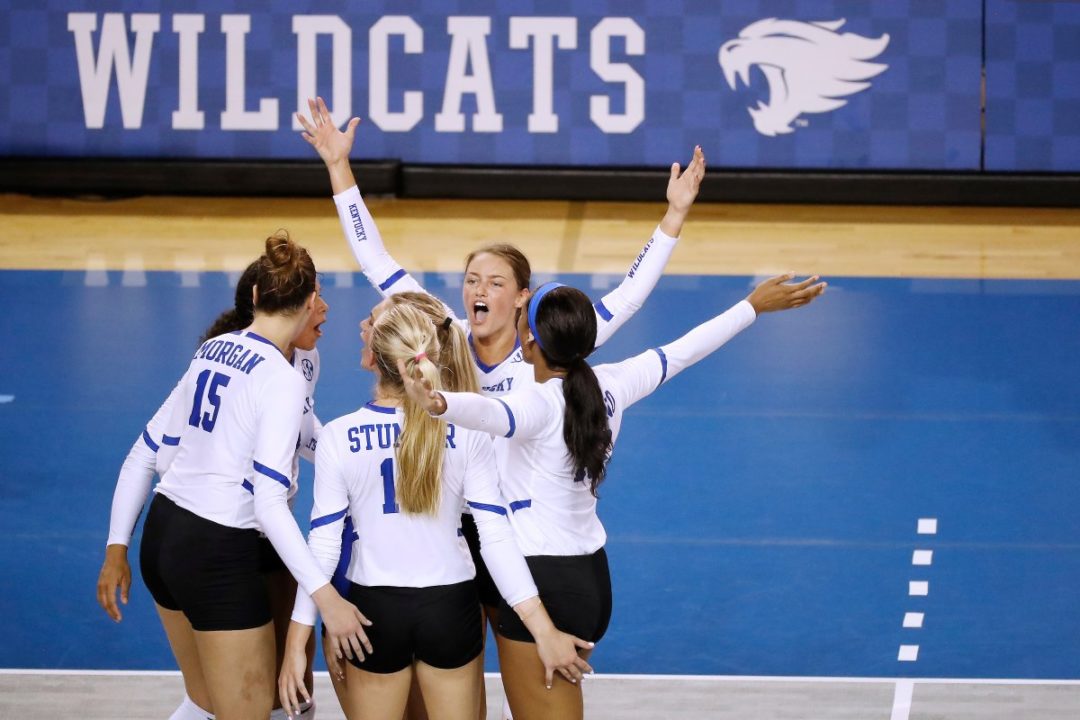 Kentucky finishes the preseason with a 6-4 record. Archive Photo via Kentucky Athletics

LEXINGTON–The #22 Kentucky Wildcats pulled off the win and sweep over the Chattanooga Mocs in their final non-conference match of the 2018 season on Sunday afternoon in Memorial Coliseum. The key to the win was controlling errors; Kentucky only had seven hitting errors over three sets.

The Wildcats strung together a couple of mid-set runs to take set one 25-14. Set two was more of the same, with Kentucky leading by as much as 10 points in the set to win 25-16. Chattanooga took off in set three by taking the first five points, but an 11-point run from Kentucky was enough to take the set 25-17. The Wildcats hit .405 in the match while holding the Mocs to a .108 clip.

Leah Edmond led the Wildcats to the win with 10 kills on 20 swings with two errors for a .400 hitting clip, while Caitlyn Cooper added in another eight kills on 12 swings with two errors to end the night with a .583 hitting performance. Brooke Morgan made her presence known with a .625 clip and Avery Skinnertook the court with seven kills.

Madison Lilley produced 28 assists and 10 digs for a double-double while Gabby Curry picked up six digs in the back-court.

For the Mocs, Gylian Finch put away nine kills on a .200 clip and Jaquelyn Lanhaimdished out 19 assists.

The Wildcats will travel to Tennesee to take on the Lady Vols on September 23rdat 1 p.m.

With the win, Kentucky improves to 6-4 on the year. Chattanooga falls to 4-9. UK will travel to Knoxville, Tennessee, on Sunday to open league play against the Lady Vols. Match time is set for 1 p.m. and it will air live on the SEC Network.

“I told the team I was pleased – offensively, they were very efficient – only seven hitting errors today and six on Friday,” head coach Craig Skinner said. “That’s a very low number for six sets combined. Defense is really an area we’ve been putting time and energy into. Holding opponents to under .100 – really excited as a coaching staff moving forward.”

Kentucky was stout in all phases of the match for the second-consecutive outing. Junior Leah Edmond paced the attack with 10 kills on a .400 hitting clip. She added a trio of blocks, two digs and an ace. Sophomore setter Madison Lilley dished out 28 assists and picked up her fourth double-double of the season with 10 digs. She also notched a pair of aces and contributed four kills to the offensive effort.

Junior Caitlyn Cooper contributed eight kills on a .583 hitting clip to couple with a block and a dig. Sophomore Avery Skinner chipped in with seven kills and utilized a .429 attacking clip. Senior Brooke Morgan added six kills on a sizzling .625 clip and had a pair of blocks.

SET 1
Morgan opened the scoring with a slam along the right line. After the Mocs answered with a kill of their own, the Cats utilized a 4-0 rally to move ahead 5-1. Lilley called her own number to halt a Chattanooga 2-0 spurt and then followed with an ace to push UK’s lead back to four at 7-3. Senior McKenzie Watson served up an ace to increase the Wildcats’ lead to six at 12-6, forcing Chattanooga into a timeout. The Wildcats maintained their edge eventually moving the score to 16-9 after Edmond tooled the block from the left side. Another Edmond termination followed by a ball-handling error by the visitors lifted the Blue and White to a 10-point edge at 19-9. Chattanooga opted to take its final timeout. Skinner’s smash to the back row lifted the Cats to a 25-14 win to start the match. Edmond led the way with five kills, while Lilley had nine assists, four digs and a pair of kills.

Set 2
Morgan and Alli Stumler teamed up for a block to begin the scoring in the second stanza. The rejection jumpstarted a 3-0 spurt and an early advantage for the home team. A block from the Kendyl Paris-Edmond tandem followed by another kill from Edmond moved the score to 9-2 in favor of Kentucky. Lilley’s second ace of the match gave the Cats their largest lead of the early going at 11-3 and Chattanooga decided to talk it over. Consecutive kills from Cooper and then a pair from Lilley increased UK’s lead to 10 at 16-6. Chattanooga continued to claw back and eventually pulled to within seven at 19-12, but the Cats frustrated the Mocs into an erroneous attack to spell the threat. Kentucky grabbed a 2-0 lead in the match following a 25-16 second set win. UK secured the win after the sixth attacking miscue of the frame by the Mocs. UK limited Chattanooga to a .161 hitting percentage in the stanza.

Set 3
Chattanooga picked up the first five points to begin the third set and UK opted for a timeout.  Out of the break, Stumler smashed a kill along the left side to snap the run. The Mocs kept the pressure on and eventually stretched their advantage to 9-3. Consecutive kills from Cooper and Skinner prompted Chattanooga to take a timeout ahead 9-5. Following the timeout, Edmond charted an ace and then Skinner slammed a kill slicing through the back-line defense. Kentucky’s run extended to six straight after a block from Cooper and freshman Gabby Goddard knotted things up at nine. UK didn’t stop there as Skinner notched back-to-back kills and then the Mocs committed consecutive hitting errors to enable UK’s run to stretch to 9-0. Chattanooga chose to take its final timeout. Following the third break of the set, UK benefited from another Moc miscue but the run ended at 11-0 with a kill from the visitors. Chattanooga didn’t go away and eventually tied the score at 15 apiece. Morgan kept the lead with the Cats with a kill on the next play. Stumler served up UK’s sixth ace of the match to give the Blue and White an 18-15 advantage. Edmond and Morgan teamed up for a block for the following point and UK’s lead once again stretched to a comfortable four points. Kentucky ended up scoring 10 of the final 12 points for a 25-17 set win to preserve the win. Goddard finished it off with a kill off the slide.

Chattanooga ends the early portion of its schedule at 4-9. Kentucky improves to 6-4 ahead of conference play. The Wildcats advanced to the Elite Eight a season ago with a 29-4 overall record.

Of note, senior Miranda Elpers played in her 100th career match for the Chattanooga Mocs while returning to her home state of Kentucky.

Full match recap can be found below.

#20 Kentucky 3, Chattanooga 0
Kentucky earned wins in the first two sets by a 25-14 and 25-16 margin to build an early 2-0 lead in the match. Chattanooga scored the first five points and held a 9-5 lead in the third before UK fought back to complete the sweep with a 25-17 victory.

The Chattanooga offense was led by freshman Gylian Finch who finished with a team-high nine kills at another team-best, .450 hitting percentage. Dani Szczepanski and Mikaela Gauthreaux each had five kills in the three set match.

Jaquelyn Langhaim once again directed the offense with 19 assists in addition to Maddie Halsey who finished with four. Miranda Elpers, Maia Rackel and Ally Fordall had two kills to help the offense.

Megan Kaufman and Langhaim paced the team with five digs on defense while Bailey Bennett and Brenna Everingham each had four. Bennett also chipped in with a career-high two service aces.

Up Next
Chattanooga opens up Southern Conference play this weekend with a pair of home matches inside Maclellan Gymnasium. UTC will face Wofford on Friday at 6 p.m. before a matchup with Furman on Saturday at 3 p.m. Post-match autographs will follow the match on Friday while Saturday is the annual ‘Military Appreciation Night’.