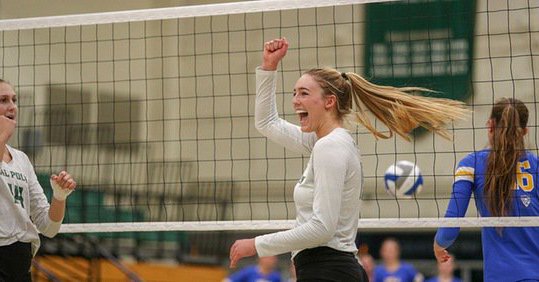 or the second time in her Cal Poly career, Torrey Van Winden captured back-to-back Player of the Week honors, spearheading the Mustangs to a 3-0 record at the North Texas Challenge. Current Photo via Cal Poly Athletics

• For the second time in her Cal Poly career, Torrey Van Winden captured back-to-back Player of the Week honors, spearheading the Mustangs to a 3-0 record at the North Texas Challenge.

• Van Winden chipped in with 11 digs against North Texas to finish with her third double-double of the season.  Also had three aces against the Mean Green while posting three block assists in all three contests.

Big West Player of the Week 2⃣ weeks in a row! After stellar performances over the weekend, Torrey Van Winden takes home the honor again! Check out the full story below. #RideHigh 🐎🏐

• Allison Martinez helped Long Beach State to a pair of wins in claiming her first Freshman Player of the Week award.

• Martinez finished the week with 18 kills, five blocks and three digs as the Beach knocked off Lamar (3-1) and Fresno State (3-2) at the LBSU Mizuno Invitational.  The 6-foot outside hitter hit a sizzling .577 overall with with just three errors in 26 swings.

• She really stepped up in the five-set triumph over the Bulldogs, posting a season-high 12 kills on 15 swings – .733 hitting – and adding a dig and two blocks.

• The former serving specialist donned the libero jersey in the second match of the Wildcat Classic against UT Martin and tied her then-career high of 13 digs in a four-set win.

• Against the tournament host Wildcats, Reyes more than doubled that effort with a career-best 30 scoops in a four-set loss.  Arizona entered the weekend ranked No. 24 nationally in hitting percentage and fourth in kills per set.

• Reyes chipped in with 11 assists and two service aces over the three matches.