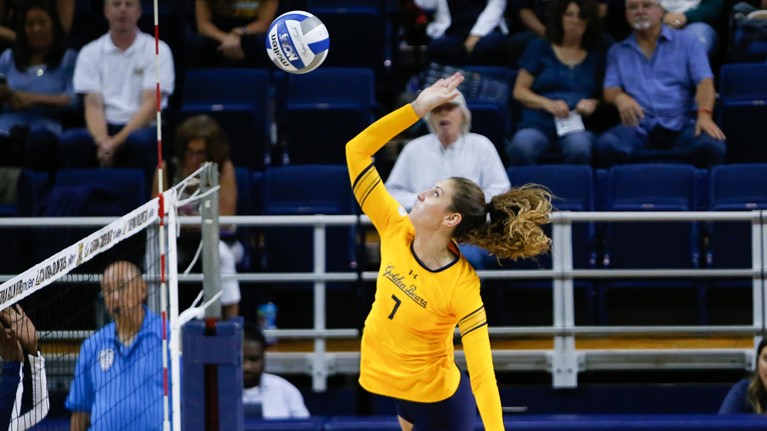 The California volleyball program has experienced some upward swings so far this season under their new coach Matt McShane. Current Photo via Stan Szeto/KLC Fotos

The California volleyball program has experienced some upward swings so far this season under their new coach Matt McShane. The Bears are now 9-1 on the season with their four-set win over St. Mary’s (Cal) on September 15, tying their 2016 win total.

McShane took over the head job after Rick Feller retired following 18 seasons with the squad, spending one season with the team already as the associate head coach. Additionally, McShane was an assistant with the team from 2005-09. McShane’s knowledge of the program and their system has helped ease the transition of him becoming the head coach this season.

The change in leadership has sparked something in the Bears, which is not to take away from the successes of Feller.

Last season, the Bears opened up the season with two wins over Southern Utah and UC Riverside in the first weekend, followed by a 2-1 finish in week two. The team struggled to find their rhythm all year, winning just three conference matches following the preseason and ending on a 0-8 losing streak.

The team has been led by Antzela Dempi with 114 kills so far this season on a .365 hitting clip. In addition, Dempi has been a solid server for the team, putting down a team-best 21 aces. Dempi is a senior outside and opposite hitter for the Bears, who was not a consistent player on last years squad, playing in just three matches and recording eight kills and four blocks on the year. This has been a turnaround season for the senior, who has nearly doubled her offensive output this season as compared to her first three with Cal.

Mima Mirkovic is also a top player for the squad, putting down 108 kills on a .260 hitting clip while also picking up 125 digs, the second most on the team behind Jessica Gaffney‘s 141. Mirkovic is a true freshman for the squad, coming out of Woodbridge High School a season early to train with the team in the spring. She is an Under Armour Third Team All-American selection and a member of the U.S. Youth National Team – bringing in some international experience and knowledge for the team.

The Bears don’t have an easy road this season, playing against a tough Pac-12 Conference slate that will begin with the reigning NCAA champions, Stanford on September 20. Their key to success will be in their consistency and aggressiveness throughout the remainder of the season – if they let up they will falter but could make a decent run in the Pac-12.