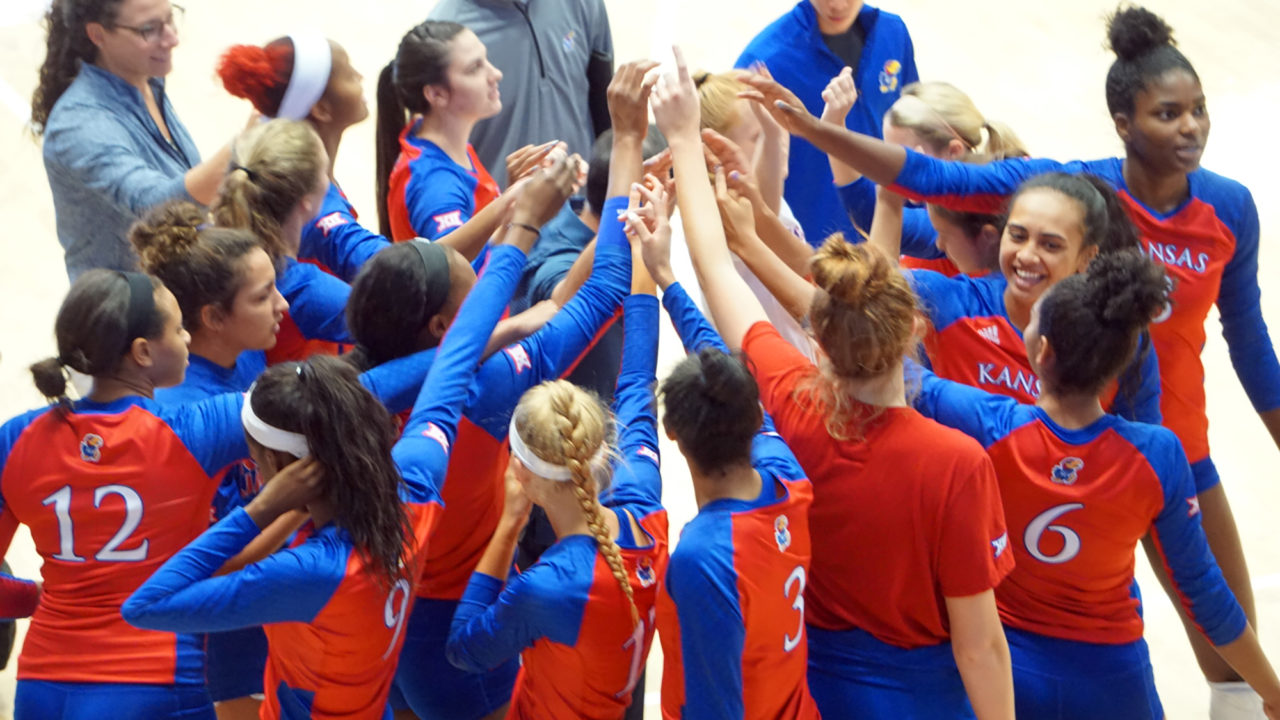 No. 8 Kansas capped its non-conference campaign with a win, topping Idaho in four sets behind All-American right side hitter Kelsie Payne.  Current Photo via Kansas Athletics

Junior outside Kaela Straw led the Vandals with 17 kills, while junior outside Reece Carman (10), junior middle DeVonne Ryter (9) and junior outside Sarah Sharp (8) were right behind. Ryter hit at a team-leading .467 clip and added five blocks, while Carman managed a team-best six stuffs. Junior libero Alycia Wodke was the lone Idaho player with double-digit digs, pulling up 23.

The teams tied 13 times in Set 1, last at 23-all, but Kansas snagged the win with kills by Alexander and Havili. The Jayhawks boasted their largest lead at 16-12, but a 5-1 run, including a trio of KU errors, erased the deficit. Down 20-18, the Vandals rallied again with a 3-0 run, capped by a Haylee Mathis ace to take a 21-20 lead of their own. Down 22-21, Kansas scored four of the final five points en route to the win.

Set 2 featured 10 ties, last at 18, before Idaho evened the match with a 25-21 win. Trailing 10-8, Idaho scored three straight last on a Wodke ace, to grab the lead. The teams tied at 11 and traded points over the next 14 points, leading to the knot-up at 18. The Vandals closed out the set by scoring seven of the final 10 points. Carman tallied two kills and two blocks in the final run.

Kansas took its largest lead of the match at 11-4 in Set 3 as Rigdon turned in two blocks and a kill. Idaho cut the deficit to four at 14-10, but could not break through. A trio of Payne putaways made it 18-12 Jayhawks and KU turned in seven of the final 10 points to go up 2-1 in the match. Rigdon served up two aces to put KU on the hill at 24-14 and a Smith kill clinched the 25-15 victory.

The Jayhawks scored five of the first six points in Set 4 only to see their lead evaporate as Idaho put together a 8-3 run, with two kills each by Straws and Sharp. KU went up by three at 12-9 and pushed the lead to five at 20-15. Down 24-21, Idaho got a kill and a block from Carman and help from a Kansas miscue to thwart three match point attempts and tie things up at 24. The Jayhawks responded with a kill by Alexander and capped the victory on a Idaho error.

Senior All-American right-side hitter Kelsie Payne led the Jayhawks with a match-high 18 kills on a .410 hitting percentage, while sophomore outside hitter Ashley Smithcontributed a career-high 13 kills during her third start of the season.

The Jayhawks and Vandals split the first two sets of the match as Idaho (5-6) recorded just two attacking errors in the first two opening sets. Kansas went on to hold Idaho to a .171 hitting percentage to win the third and fourth sets and close out the weekend in California.

“We were just defensively below average in the first two sets,” Bechard said. “Then we made a little bit of a change with how we rotate behind the block in the third and fourth sets — holding them below .200, which is where we have to be to be successful. I thought that energy defensively really changed the momentum of the match moving forward.”

Kansas aced its test at the service line this weekend, closing the tourney on Saturday with six aces led by three each from Rigdon and senior defensive specialist Addison Barry. Through three matches in California this weekend, the Jayhawks recorded 15 aces and just 13 service errors. Idaho, which leads its conference in aces per set (1.70), was held to three aces and 12 service errors on Saturday.

Kansas and Idaho met for the first time in program history on Saturday. The Jayhawks have won the last eight matches against current Big Sky Conference teams, dating back to 1996.

UP NEXT
Kansas begins Big 12 Conference play on national TV as ESPN2 will televise the first installment of the 2017 Dillons Sunflower Showdown on Sunday, Sept. 24 in Manhattan.

“I thought we played really well,” head coach Debbie Buchanan commented post-match. “I think we could have even taken the match even longer. I am really proud of how the team came out and competed. That is what we are going to need to continue to do. Play hard and consistent like we did today. We were able to outhit and outblock them. It just came down to a few little things here and there.”

Idaho (5-6) bounced out to a 3-1 lead to open the second before Kansas used a 7-3 run to claim a 9-7 lead. An ace from Alycia Wodke gave the Vandals a brief 11-10 lead. The teams played point-for-point until a block from Torrin Crawfordand Mathis followed up a Sarah Sharp kill that gave Idaho a 17-15 lead. The Jayhawks would again tie the set at 18, but the Vandals followed up with kills from Ryter and Straw to regain the lead 21-18. Idaho won the race to the finish, taking three of the final four points. Carman and Crawford combined for a block, clinching the set 25-21.

“Game one we were within two,” Buchanan noted. “We were right there. Game four we took within two. We are right on that cusp. I thought it was a really good match overall. Offensively, we were able to keep our swings high and get those kills. That is what we have to take away from this. We played fairly steady for the whole match. We were able to keep it close. That is just the difference between a top-10 team. We still need to make some things happen.”

KU was able to gain the 2-1 lead after the third set. The Jayhawks were able to outhit Idaho in the set, .385 to .214 percent. Kansas used an 11-4 open to the frame to control the tempo. Idaho would twice slim the lead down to four, but could not break the Jayhawk’s momentum.

Idaho had to battle back from another slow start in the fourth. Kansas quickly went up 5-1, forcing Idaho to use its first timeout. The Silver and Gold used a 5-0 run with Paige Rupiper at the serve to take a 9-8 lead. Kansas was the first to 20, gaining a five-point lead. Idaho cut back to within three, 20-18, forcing KU into a timeout. The Jayhawks reached match-point at 24-21, but Idaho held its ground tying the match at 24 thanks to a Carman kill. Kansas won the final two points to slip away with the win.

“The team feels really good about today,” Buchanan added. “Our goal in the preseason is not to be 10-0 and blow through everybody. We want to be challenged. Our team has grown and battled. We have beat some really good RPI teams. We have beaten teams that were 7-1, 7-0 and we were able to sweep them. I think we have learned a lot about ourselves and have grown a lot.”

The Vandals will open the Big Sky season at home next Thursday. Idaho will welcome in Montana State for the team’s home opener.