Canada, Brazil & Cuba Sweep Opponents On Day 1 Of U21 Men’s Pan Am Cup 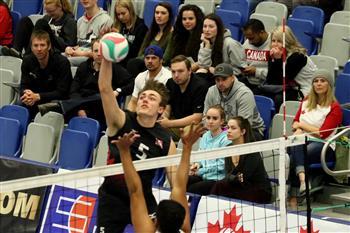 The first day of the U21 Men’s Pan American Cup featured Canada, Brazil, and Cuba with easy three set wins to open up the competition.

The top scorers for the hosting squad of Canada were Matthew Passalent and Eric Loeppky who each recorded 15 points. Passalent put down three aces in the match. For Guatemala, Erik Flores contributed seven points in the losing effort.

Canadian head coach, Gino Brousseau was satisfied with his team’s performance, saying it is difficult to play a team like Guatemala, as they are smaller than the much larger Canadian team.

The sheer size and power of the Cuban squad was too much for the Chilean side.

Cuba was led by Miguel Gutierrez who put down an impressive 21 points in the match, including 11 of the points coming from service aces. Miguel Lopez contributed another 12 points for the winning side.

The Brazilian side took less than one hour to run through Barbados in the three-set sweep. Felipe Roque led Brazil with 10 points while Victor Cardoso added another seven. For Barbados, Carlos Cyrus and Jherard Morris-Sealy each put down seven points in the losing effort.

The competition will continue on May 17 with three more matches unfolding. May 18 will feature the final day of the preliminary round matches with the pool winners advancing directly to the semifinal round while the second and third place finishers competing in the quarterfinal round to advance.