Canada Women Look To Qualify For World Championships At Home 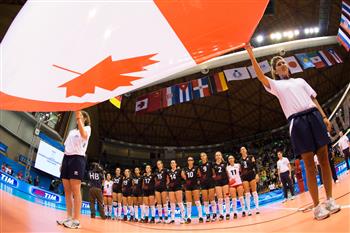 Team Canada will begin their journey to obtaining a spot at the 2018 World Championship with the 2017 NORCECA Women's World Qualifier being held at the Langley Event Centre in BC, Canada. Current Photo via FIVB

Team Canada will begin their journey to obtaining a spot at the 2018 World Championship with the 2017 NORCECA Women’s World Qualifier being held at the Langley Event Centre in BC, Canada.

The Canadians will host Cuba, Nicaragua and St. Lucia in a round robin tournament. The top-two teams from the tournament will earn their bid to the World Championships that will take place in Japan next October. They will join the defending champions Team USA, Russia, Serbia, Turkey, Italy, Azerbaijan, Germany, The Netherlands and Bulgaria from Europe, Brazil from South American and China, Kazakhstan, Korea and Thailand from Asia.

If Canada makes the World Championships, it would be their third straight and ninth overall visit. Their best finish at the tournament was 11th in 1974 in Mexico and 1982 in Peru.

At the qualifier, Canada and Cuba are the undisputed favorites to pick up the bids to the World Championships.

The Canadian women will bring in a large chunk of their 2017 World Grand Prix roster to the NORCECA qualifier. Margaret Casault is the only new addition to the squad, while everyone else was listed on the roster for this summers competition. At the World Grand Prix, Canada struggled constantly, winning just three of their nine matches in the preliminary round. Their record was enough to put them in eighth place overall and out of the Final Six.

Kyla Richey will be the strong point for Canada at the qualifier, as she consistently led the team at the Grand Prix.