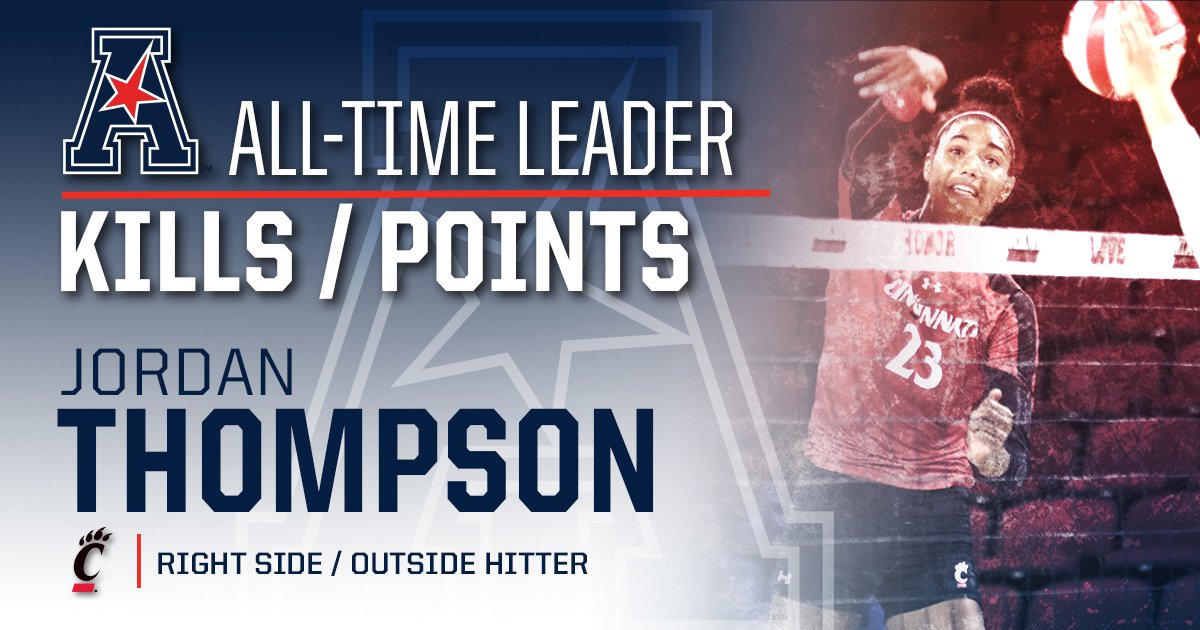 If Thompson continues her current offensive pace, she's going to break a lot more records this season. Current Photo via The AAC

The 14-4 Cincinnati Bearcats are undefeated (5-0) in AAC conference play so far this season. Leading the way for the team offensively is 6’4″ redshirt junior Jordan Thompson, a graduate of the famed Northern Lights volleyball club in Minneapolis, who already has 431 kills and 475 points this season.

That point total puts her 53 points and 59 kills ahead of UCSB’s Lindsey Ruddins: the next-closest player in Division I volleyball in each category. She’s doing it all while hitting an uber-efficient .325, which ranks her 5th nationally among opposites. All of this comes after Thompson redshirted the 2017 season with injury.

In the process, she’s become the American Athletic Conference’s all-time leader in career kills and points scored with 1,470 and 1,616, respectively.

While Thompson is only a redshirt junior, important context here is that the AAC is a relatively-new conference, having existed since 2013, and many of the school’s record-holders (including Bohannon) started or ended their careers in other conferences during a very volatile period for Division I athletics. For example, Bohannon only played in the AAC from 2014-2016; as a freshman, the team were members of Conference USA (the conference from which the AAC split). Had Bohannon played her entire career in the AAC, she would still be the career leader with 1,741 kills and 1,961 points. Still, at her current pace, Thompson is due to eclipse the 750 kills barrier this season. That would crush the Cincinnati school record for kills in a season of 635 done by Stephanie Niemer in 2010 and rank her 4th on the school’s all-time, all-eras kills record (and less than 400 from the school’s all-time mark).

The current 25-point scoring format era (2008-present) record for kills is 715, set by Saint Louis’ Danielle Gygelski in 2016. In that season, Rygelski averaged 6.01 kills/set. Thompson is currently at 6.07/set, and Cincinnati is averaging more sets/game this year than Saint Louis did in 2016.

The NCAA doesn’t split career records out into eras, so Thompson has little chance of catching Svetlana Vyturina’s all-time record for career kills of 3,043. Thompson is easily in reach of the all-time top 10, however. The 2008-present best for career kills belongs to another pre-AAC Tulsa Golden Hurricane: Tyler Henderson, who had 2,525 kills from 2009-2012. Thompson will have to keep up her blistering pace to get there, but it is reachable.