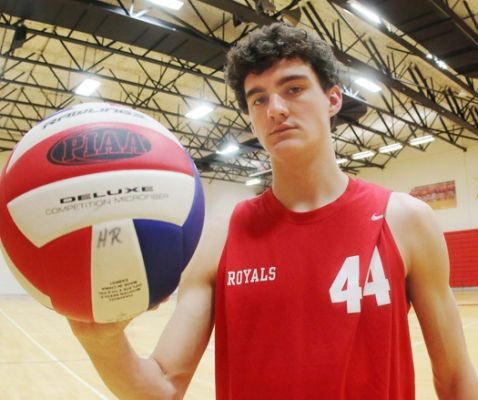 Class of 2018 recruit Ben Rachilla has committed to Quincy University for the 2019 season. Current Photo via Holy Redeemer HS (@HRHSAthletics)

High school recruit Ben Rachilla has committed to the Quincy University Men’s Volleyball team as part of the class of 2018 – meaning he would join the team for the 2019 season. A current junior senior at Holy Redeemer High School, Rachilla stands at 6’5″ and is listed as a middle hitter.

Congrats to Senior Ben Rachilla on his verbal commitment to continue his Academic and Volleyball Career at Division 1 Quincy University ? ?? pic.twitter.com/6hjsKKbxxP

In his first three seasons of high school volleyball, Rachilla has totaled 552 kills (3.3 per set), including 5.6 per set last season as a junior. He also has logged a .353 career hitting percentage and is averaging a block per set in three years per his MaxPreps page.

Some of Rachilla’s highlights from his time with Holy Redeemer High School can be seen below via YouTube:

Quincy is getting ready to start the 2018 season as they look to bounce back from a 7-22 campaign in 2017. Currently they have four middle blockers on their roster, with one being a senior – meaning he would graduate by the time Rachilla arrives. However, Rachilla could also experience a position change to outside hitter or opposite depending on how Quincy needs to construct their roster.

If you have a college commitment that you’d like to announce, please email it to us at [email protected].