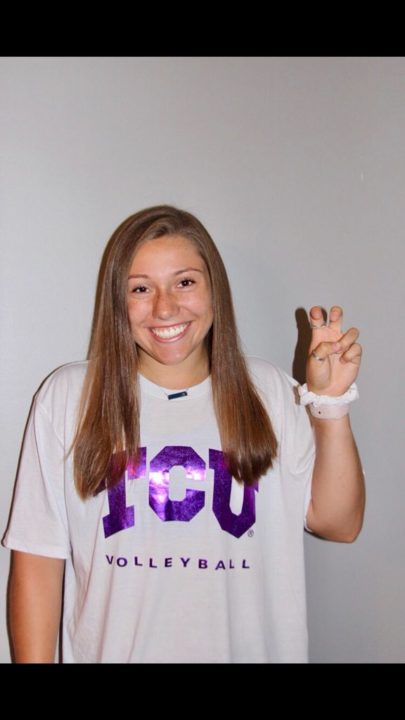 TCU has landed a recruit with a familiar last name, as 2020 S/DS Alyssa Heist is following her sister's footsteps by committing to the Horned Frogs. Archive Photo via Alyssa Heist (@alyssa_heist)

A junior-to-be once the new school year starts up, Heist attends Coronado High School in El Paso, Texas. In her most recent campaign as a sophomore, she helped the team to a 34-4 record and a second-straight district championship that concluded with an appearance in the Regional Quarterfinals of the Texas State Tournament for Volleyball 6A Regions 1 & 3.

Heist also plays with El Paso Wildfire for club ball, more specifically the Wildfire 17’s coached by Chuck Heist and Cristy Crank. Besides standing at 5’7″, she owns an 8’9″ block touch and a 9’0″ approach jump. Video of her play can be seen here.

It wouldn’t be the first time that a Heist is headed to play volleyball with the Horned Frogs either. Alyssa’s older sister, Alexia Heist, was a 5’7″ setter/defensive specialist as well who played four seasons with TCU from 2012-2015. In total, Alexia notched 2,182 career assists, 918 digs and 76 aces with top numbers in assists per set (7.03) and digs per set (2.04) coming in 2014 as a junior.

I am so grateful to announce my verbal commitment to continue my academic and volleyball career at TCU. Thank you to everyone that has supported me throughout this process! #GOFROGS 🐸💜 pic.twitter.com/DLufAbQajq