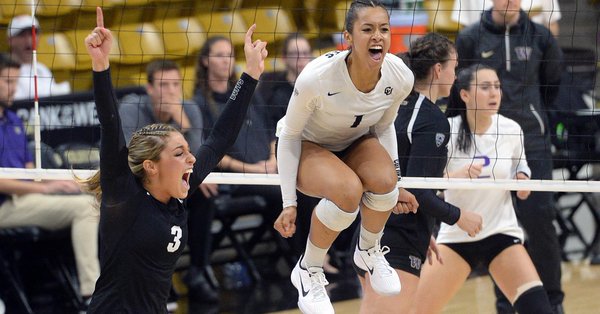 With just six matches left in the regular season, every match is important to stay on top of the Pac-12 standings. Current Photo via Colorado Athletics

With just six matches left in the regular season, every match is important to stay on top of the Pac-12 standings. And the Colorado Buffaloes have a tough test this weekend against a pair of top-20 opponents.

CU, which is ranked 25th in the latest AVCA Division I Coaches Poll, will take on No. 18 UCLA and No. 17 Southern California for the second time this season. The Buffs, which suffered a 3-2 loss to the Bruins in Boulder, will face UCLA on Thursday, Nov. 9, at 9 p.m. MT. On Saturday, Nov. 11, at 2 p.m. MT., CU will look for its second straight win against the Trojans.

HOW TO WATCH: The match against UCLA will be televised live on Pac-12 Mountain and Pac-12 Los Angeles. Anne Marie Anderson will have the call. The contest against USC will be streamed live on Pac-12 Plus (a link to the stream is available at CUBUffs.com).

ABOUT THE BUFFS: Colorado improved to 19-6 overall after sweeping Washington State and then-No. 11 Washington last week. The pair of wins also moved the Buffs into a three-way tie for third in the Pac-12 standings with a 9-5 mark. CU has also won seven of its last eight matches, which includes a 3-1 record against ranked opponents.

Junior Alexa Smith leads the Buffs and ranks sixth in the Pac-12 with 4.07 kills per set and is second in the league in attacks (11.23 per set), while junior Frankie Shebby is eighth in the conference with 3.34 kills per set. Junior Naghede Abu has the fourth best hitting percentage in the league (.358), while senior Anna Pfefferle ranks seventh in the Pac-12 with a .351 hitting percentage.

Colorado’s offense is directed by freshman setter Brynna DeLuzio. She ranks second in the Pac-12 and is 26th in the NCAA with an 11.06 assists per set average and has guided the Buffs to a .253 hitting efficiency, which is fifth in the conference. DeLuzio was named the Pac-12 Freshman of the Week on Nov. 6 for the fourth time this season, a CU record.

Defensively the Buffs are led by Abu who has recorded 1.22 blocks per set (sixth in the Pac-12). Junior Gabby Carta-Samuels ranks seventh in the conference with a 3.71 digs per set mark.

SCOUTING THE TROJANS: Southern California is ranked 17th heading into this weekend. The Trojans are second in the Pac-12 standings with a 10-4 record and are 18-7 overall. Khalia Lanier is the top offensive weapon for USC, averaging 4.08 kills per set. She missed a few matches, including the previous meeting against CU, but has still tallied a team-best 326 kills. Lanier is also fourth in the conference with 10.79 attacks per set. At the net, Jordan Dunn is averaging 1.03 blocks per set, which is 15th in the Pac-12. Victoria Garrick leads the team with 3.93 digs per set.

WHAT’S NEXT: The Buffs return home to host Arizona and Arizona State, Nov. 17 and 18, respectively.