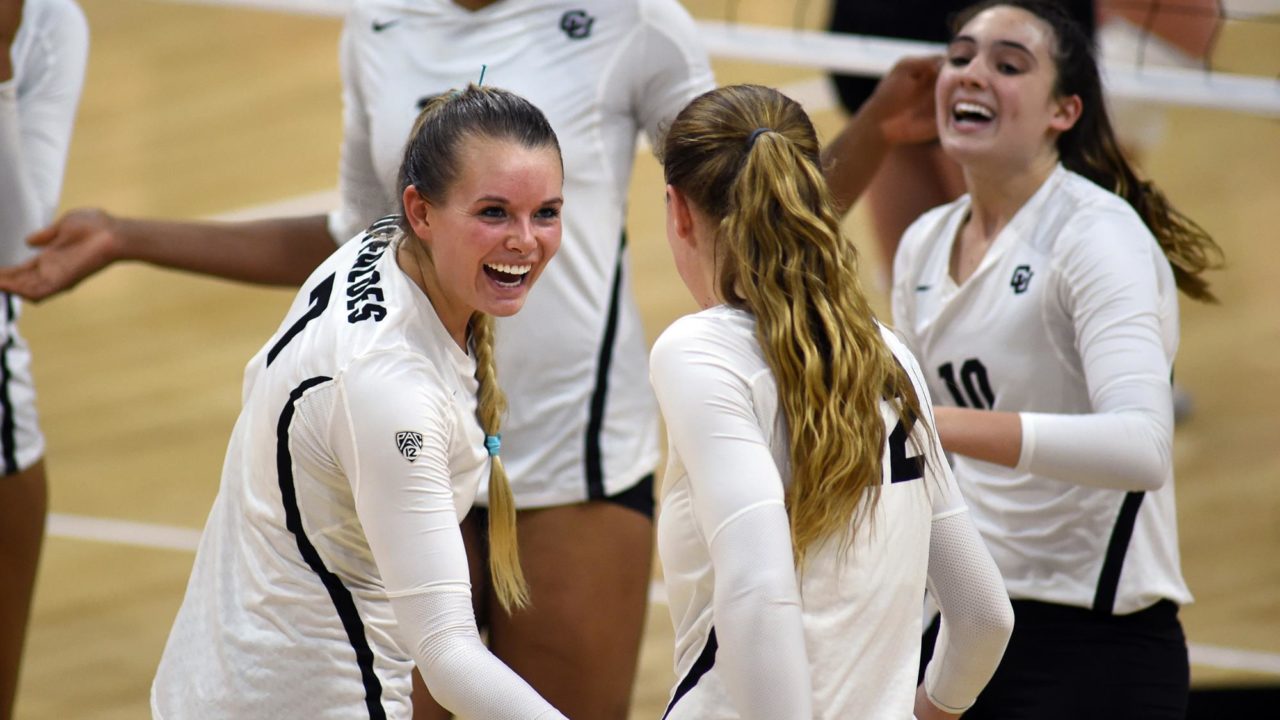 After playing four straight matches away from home, the Colorado Buffaloes will return to the Coors Events Center this weekend to host a pair of top-20 opponents. Current Photo via Colorado Athletics

After playing four straight matches away from home, the Colorado Buffaloes will return to the Coors Events Center this weekend to host a pair of top-20 opponents. First up, the Buffs will take on 19th-ranked Southern California on Friday, October 20 at 8 p.m. Then on Saturday, October 21, CU will host No. 13 UCLA at 7 p.m.

HOW TO WATCH: Both matches this weekend will be televised live on Pac-12 Mountain. Krista Blunk will have the call for both. She will be joined by Camryn Irwin on Friday and on Saturday, Kelli Tennant will join her in the booth.

ABOUT THE BUFFS: Colorado is 14-5 overall and is tied for sixth in the Pac-12 with a 4-4 mark. The Buffs improved to .500 in conference play with a weekend sweep of the Arizona schools on the road. CU started the road trip with a 3-0 victory over Arizona State and finished it with a 3-2 win against Arizona. This is the first time CU has recorded a road sweep since 2015.

Junior Alexa Smith leads the Buffs and ranks fifth in the Pac-12 with 4.16 kills per set and is also second in the league in attacks (11.57 per set). Senior Anna Pfefferle ranks third in the Pac-12 with a .343 hitting percentage and junior Naghede Abu is sixth (.343).

Colorado’s offense is directed by freshman setter Brynna DeLuzio.She ranks second in the Pac-12 and is 19th in the NCAA with an 11.32 assists per set average and has guided the Buffs to a .255 mark, which is sixth in the conference.

Defensively the Buffs are led by Abu who is recording 1.26 blocks per set (sixth in the Pac-12 and 52nd in the NCAA). Junior Gabby Carta-Samuels ranks sixth in the conference with a 3.62 digs per set mark.

SCOUTING THE TROJANS: Southern California is ranked 19th in the latest AVCA Coaches Poll with a 14-5 record. The Trojans are third in conference play with a 6-2 mark. Khalia Lanier is the top offensive threat for USC, averaging 4.08 kills per set, which is sixth in Pac-12. She is also sixth in the conference with 0.34 service aces per game. The Trojans are ninth in the country with 14.51 kills per set and are averaging 13.54 assists per set, which is 13th in the NCAA. Victoria Garrick leads the back-row with 4.09 digs per set and at the net, Danielle Geiger is posting 1.03 blocks per set.

WHAT’S NEXT: The Buffs start the second half of the conference season in the Pacific Northwest. They will first face-off against Oregon on Oct. 27 in Eugene, Ore., and on Oct. 28, CU will play Oregon State in Corvallis, Ore.